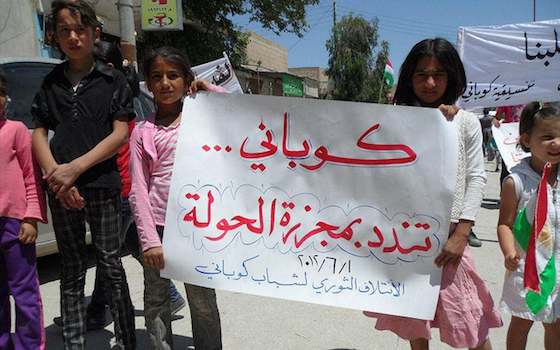 Recently, I posted about Turkey's reluctance to commit military resources to halting the spread of the Islamic State. In the New York Times, Kirk Semple and Tim Arango neatly summed up the reason.

Turkey's reluctance stems in part from its desire not to do anything that might strengthen the Kurdish populist movement in the region. The defense of Kobani is being led by the People's Protection Units, or Y.P.G., an affiliate of the P.K.K., which is officially listed as a terrorist organization by the United States and the European Union. In addition, Syrian Kurds have been trying to establish an autonomous region on the border, which Turkey wants to prevent.

Turkish warplanes were reported to have attacked Kurdish rebel targets in southeast Turkey after the army said it had been attacked by the banned PKK Kurdish militant group, risking reigniting a three-decade conflict that killed 40,000 people before a cease-fire was declared two years ago.

Meanwhile, the A word -- appeasement -- has reared its ugly head. Well, okay, I only saw it in this article by Turk Dilay Gundogan at Middle East Online posted Sept. 20: Turkey loses only excuse for appeasement with Islamic State. He was referring to this:

Forty-nine Turks were freed Saturday more than three months after the Islamic State group kidnapped them in Iraq, as tens of thousands fled across the Syrian border from the advancing jihadists.

NATO member Turkey has so far been reluctant to take part in combat operations against the IS militants, or allow a US-led coalition to use its airbases for strikes against them, citing its concern over for the safety of the hostages.

That was almost a month ago and Turkey still hasn't joined the fight against the Islamic State. Why isn't Turkey afraid of the Islamic State overrunning its porous borders? One's first impression is that, if push comes to shove, the Turkish government has faith in its military to halt the Islamic State. In fact, though, as Peter Kenyon writes at NPR:

The pressure on Turkey to jump into the fighting has a strong emotional pull, analysts say, but few people seem to have considered what might happen if Turkey actually did intervene.

If Turkey opens up another front in the long-running Syria conflict, it risks spreading the violence to yet another country, says Hugh Pope with the International Crisis Group.

"Where will it not be vulnerable? There's a 500-mile border that is porous [and] that is already … penetrated by the Jihadis," Pope says. "We have 1.5 million Syrian refugees in Turkey, how many of them may be sleeper cells? Turkey will face real domestic problems if it tries to take really decisive action one way or the other in Syria."

Perhaps Turkey is just counting on the United States, which is hammering the Islamic State with airstrikes in the vicinity of Kobani, to stop the Islamic State, freeing it to concentrate on the Kurds.