US-Saudi-Iran Rapprochement Needed Before Peace in Syria Can Happen 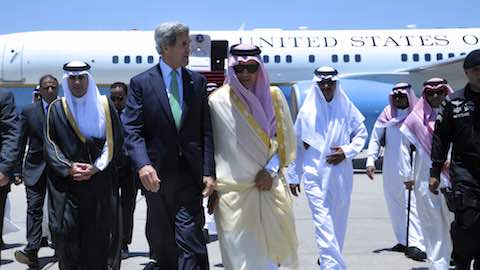 US-Saudi-Iran Rapprochement Needed Before Peace in Syria Can Happen

Treating the Syrian conflict in isolation from other regional problems just might facilitate a US-Saudi-Iran rapprochement, argues Neil Thompson. 'De-escalating' the material support provided to the warring factions and imposing a complementary economic embargo might also help spur the process along.

It has proved impossible for the West to wish away the realities of the interlocking conflicts in Iraq and Syria. While the so-called Islamic State has been driven back from about 25 percent of the Iraqi territory it seized last summer and significant leaders have been killed, the group nevertheless remains resilient and capable of staging comebacks. For instance, reports are starting to surface that Ramadi, capital of Iraq’s disputed Anbar province, is on the verge of falling to IS militants. In addition, IS is also expanding its reach in Syria, where it recently cooperated with al-Qaeda affiliate Jabhat al-Nusra to consolidate both groups’ control over the disparate rebel movement. Having ruled out cooperation with the Syrian government on account of its human rights abuses the West lacks a local partner with whom it can fight the militants on the ground. Successful action against IS in Iraq is ultimately useless if the group can compensate with gains in Syria. It’s time for fresh thinking.

Having backed away from directly overthrowing the Assad regime in 2013, Washington instead sought to train and arm moderate anti-regime forces with advanced weaponry. However, attempts to create a Syrian version of the anti-jihadi Sunni Sahwa (Awakening) movement have demonstrably failed. During the recent Idlib offensive, for example, Jabhat al-Nusra militants were photographed using American TOW anti-tank missiles, which were probably seized from the US-backed Syrian Revolutionary Front (SRF) during intra-rebel feuding last year. Back in November 2014, Jabhat al-Nusra also attacked the SRF and other moderate groups linked to the Free Syrian Army (FSA) and absorbed their equipment, territory and many members. Other FSA cells have simply defected en masse to the more prestigious fundamentalist rebel formations, taking their US weapons and training with them.

President Assad has rightfully been accused of manipulating the issue of Sunni fundamentalism to shore up domestic support for his regime. However, pointing this out does not mean that Syria’s minorities will not share the fate of their Iraqi neighbours should Islamic State or Jabhat al-Nusra seize their areas. Indeed this has already been tacitly admitted since the US has been bombing parts of Syria now controlled by the Support Front and Islamic State, thus helping the military efforts of a dubious regime it is official American policy to overthrow. The West cannot keep fighting and arming all sides of Syria’s multisided civil war simultaneously and claim to have a coherent strategy. It will need to chart a path out of the Syrian quagmire that does not involve blanket support for either party.

Towards A Post-Assad Syria

The key issue to resolving the Syrian struggle remains the organized departure of President Assad, which can only be achieved by negotiating his exit through the actors who keep him in power, principally the Iranian government. Yet, parting Assad from his foreign backers would only be the first step along a much longer road to peace inside Syria. There is nothing inevitable about Assad receiving continued Iranian backing if changing factors cause Tehran’s calculations to shift. After all, it eventually abandoned former Iraqi strongman Nouri al-Maliki once it realised that he had lost too much legitimacy to continue as the country’s Prime Minister. With a deal seemingly approaching over the previously intractable nuclear issue, perhaps the time has come to seek a slow rapprochement over the Syrian half of the interlinked Iraq/Syria conflicts.

Civil wars which have become internationalised like Syria’s are also notoriously difficult to resolve by force alone. Any real peace accord would only be acceptable to the communities inside Syria currently supporting Assad if they believe their security would be guaranteed. Assad himself would only agree to step down if his safety outside Syria could be guaranteed, probably by providing a refuge in Iran so he could avoid an international criminal prosecution. Likewise, any exit arranged for him would have to be such that there can be no possibility of his staging an armed comeback as has been the case with former Yemeni President Ali Abdullah Saleh. This would be completely unacceptable to the fragmented Syrian opposition. After so much bloodshed the transition to peace will be tortuous and complex, but the internal strains can be considerably reduced if the international environment is right and external actors push together for a peace treaty.

What might be needed is a Syrian version of the Taif Agreement that ended the civil war in neighbouring Lebanon. Any grand bargain would have to be backed by the United States, Iran and Saudi Arabia and cover political reform (i.e. the dismantling of the Ba’ath party’s monopoly on power), the return of refugees and the disarmament of all state and non-state militias. This seems less likely in the short term after the divisive events in Yemen, since the Syrian conflict has come to be perceived as inseparable from wider Saudi-Iran regional power struggles. On the other hand, the expense for Iran of supporting the Assad regime will shortly be matched by a drain on Saudi finances that support the fighting in Yemen.

Moreover, the recent interim breakthrough over Iran's nuclear program demonstrates that the best way to achieve momentum in the Syrian peace talks might be to treat the struggle in isolation from other regional events. It was only after Iran's nuclear program was prioritised by the P5+1 as a single issue separate from Tehran's behaviour in other spheres that international diplomatic progress towards an agreement was made. Likewise, Russia's diplomatic initiative earlier in the Syrian conflict succeeded with the dismantling of government chemical weapons under international supervision without toppling the Assad regime or ending the civil war.

Complaining about Russian or Iranian protection of the Assad regime will not change that fact both national governments consider it in their interests to do so. Nor will it alter the situation inside Syria, where after four years of fighting, no side has proved strong enough to overcome all the others. But unless Syria's rival foreign backers can take some shared responsibility and start to come to an international agreement first, the warring factions will have no incentive to come to terms. What is needed now is an agreement to implement a comprehensive international de-escalation of material support to all sides, including the regime. If this was combined with an economic embargo to stop funds for military purposes getting out and smuggled arms getting in, this could slash the resources available to any group to keep their fighters armed, fed and paid. Properly enforced by neighbouring states it would hurt the ability of both the rebels and the regime to continue the struggle and help push them towards the negotiating tables, whilst in theory still allowing aid for civilians in.

With loud Saudi concerns about sinister Iranian influence in Damascus, Baghdad, Beirut and now Sana'a, such a process can seem unlikely. But consider that US airstrikes supported Iranian Revolutionary Guards Corps advisers fighting alongside the Shi’ite militias that took Tikrit and one can sense that behind the scenes areas of cooperation are already being explored. The fracking revolution in America means Washington has fewer concerns about energy security and placating its Gulf Arab allies, including Saudi Arabia.

For its part, Tehran has seen its influence in the Middle East grow but, as with the Soviet Union in the 1970s, a moribund economy is also absorbing the costs of other people’s wars. President Hassan Rouhani is keener on economic engagement to raise everyday living standards than spreading the Iranian revolution. All this means that the prognosis for a US-Iran rapprochement over Syria is not as far-fetched as critics may assume. Even Riyadh may raise fewer objections than expected. Above all Saudi Arabia is determined to remain the unchallenged leader of the Arabian Peninsula. While Saudi proxies have failed to drive Assad from power in four years of fighting, the Kingdom now perceives it faces a threat closer to home from the Yemeni Zaidi Houthi movement. The day may soon come when the Saudis are happy to explore toning down their support for rebels in Syria in exchange for a similar reduction in aid to the troublesome Houthis by Iran.

Neil Thompson is Content Editor at News4Media and freelance contributor at the Diplomat, Informed Comment, Geopolitical Monitor and similar publications. He holds an MA in International Relations of East Asia from the University of Durham.

"US-Saudi-Iran Rapprochement Needed Before Peace in Syria Can Happen"