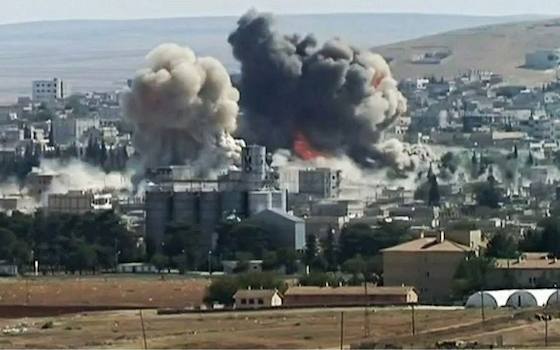 In the New York Times, James Kirkpatrick writes that a "series of episodes over just the last four weeks is raising new fears about the capacity of the extremists who call themselves the Islamic State to catalyze so-called lone-wolf attacks, conceived and carried out by individuals or small groups around the Western world who may have little or no connection to the Islamic State." These include:

... Australian authorities arrest a ring of 12 accused of plotting daring murders, including a public beheading.

In Canada, a gunman assaults the Parliament building and kills a soldier guarding a war memorial, and a motorist strikes two soldiers, killing one -- in both cases, perpetrators with tenuous links to Islamist extremism.

And in New York City, a man wielding a hatchet attacks four police officers in Queens, slashing one in the head and another in the arm.

The gunman in the attack on Canada's capital had a criminal record and recently applied for a passport, planning to travel to Syria after undergoing a "radicalization process," police said on Thursday.

It seems that, back on September 22, the Associated Press reported:

According to ABC News, the video says: "If you can kill a disbelieving American or European, especially the spiteful and filthy French, or an Australian, or a Canadian, or any other disbeliever, then rely upon Allah and kill him in any manner or way however it may be."

At USA Today, James Robbins writes about the Canadian attacks.

Martin Couture Rouleau ran down two soldiers with his car in Saint-Jean-sur-Richelieu, southeast of Montreal, killing one. Rouleau, who had changed his Facebook name to "Ahmad," was a radicalized convert to Islam who openly posted jihadist messages in social media. Like Zehef-Bibeau, his passport had been withdrawn, in his case in July when he attempted to travel to Turkey, purportedly to join the fighting in Syria.

"Rouleau and Zehef-Bibeau's apparent lone wolf actions, or ‘individual jihad'," he continues, "are the kind of attacks that al Qaeda and other terror groups have recently been encouraging. They are inexpensive, harder to detect and disrupt, and chillingly effective. It remains to be seen whether Wednesday's attack was part of a coordinated, longer term plan, or a spur of the moment operation, perhaps seeking revenge for Rouleau's death two days earlier."

Either way, "both of this week's incidents demonstrate the global reach of radical extremism and could encourage future small-scale attacks."

Returning to Kirkpatrick of the Times, the appeals from the Islamic State generate more response than Al Qaeda's in the past.

"The Al Qaeda ‘fan boys' never did this, definitely not in so coordinated a fashion in so close a time," said William McCants, a scholar of Islamist militancy at the Brookings Institution.

Decades of Qaeda calls for Muslims in the West to instigate their own attacks mostly "fell on deaf ears," but "the ISIS guys are just really energized," Mr. McCants said, using an alternate name for the group, the Islamic State.

The group's social media messages to Muslims living in the West have changed sharply, from "come join the attack" to "we are being attacked and what are you doing? You are just sitting there!" said Mokhtar Awad, a researcher at the liberal Center for American Progress, based in Washington.

The attacks mark a dark, new chapter in the already blood-soaked saga of the Islamic State. Kirkpatrick:

Analysts say the far-flung plots and attacks mark a change in the nature of the group and its threat to the West. Unlike Al Qaeda or other jihadist groups, the Islamic State had previously focused on capturing territory across Syria and Iraq and on sectarian killings in its own region -- not on a global war against the West. But since the American-led bombing campaign against the group began to hit its Syrian stronghold, the Islamic State has sought to retaliate by urging its sympathizers throughout the West to strike back on its behalf.