Khomeini Drew the Line at Nukes 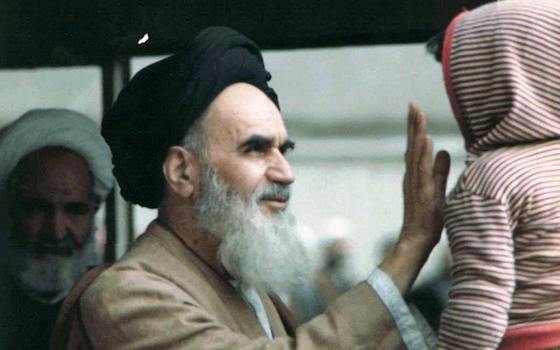 Khomeini Drew the Line at Nukes

Iranian politicians sometimes refer to the United States as the Great Satan. Ayatollah Ruhollah Khomeini, leader of the Iranian Revolution, used the term iblis (a devil in Islam) to characterize the United States. But to many Americans, Khomeini, Iran's first supreme leader, was a demon himself. Not only did he preside over the hostage crisis, he executed thousands of political prisoners not long after he assumed power, and he empowered terrorist acts by Hezbollah.

But when it came to state-sponsored violence, the Supreme Leader definitely had his limits. In his book Manufactured Crisis: The Untold Story of the Iran Nuclear Scare (Just World Book, 2014), Gareth Porter wrote about Khomeini's reservations about chemical and nuclear weapons. In a recent article for Foreign Policy titled When the Ayatollah Said No to Nukes, he expanded on that.

While in Tehran recently, Porter interviewed Mohsen Rafighdoost, who served as minister of the Islamic Revolutionary Guard Corps during the Iran-Iraq War. When Iraq used chemical weapons against Iran,

The supreme leader was unmoved by the new danger presented by the Iraqi gas attacks on civilians. "It doesn't matter whether it is on the battlefield or in cities; we are against this," [Khomeini] told Rafighdoost. "It isharam [forbidden] to produce such weapons. You are only allowed to produce protection."

Invoking the Islamic Republic's claim to spiritual and moral superiority over the secular Iraqi regime, Rafighdoost recalls Khomeini asking rhetorically, "If we produce chemical weapons, what is the difference between me and Saddam?"

... told Khomeini [of] "a plan to produce nuclear weapons." That could only have been a distant goal in 1984, given the rudimentary state of Iran's nuclear program. At that point, Iranian nuclear specialists had no knowledge of how to enrich uranium and had no technology with which to do it. But in any case, Khomeini closed the door to such a program. "We don't want to produce nuclear weapons," Rafighdoost recalls the supreme leader telling him.

In short, Rafighdoost understood Khomeini's prohibition on the use or production of chemical, biological, or nuclear weapons as a fatwa -- a judgment on Islamic jurisprudence by a qualified Islamic scholar. It was never written down or formalized, but that didn't matter, because it was issued by the "guardian jurist" of the Islamic state — and was therefore legally binding on the entire government. "When Imam said it was haram [forbidden], he didn't have to say it was fatwa," Rafighdoost explained.

"Khomeini Drew the Line at Nukes"