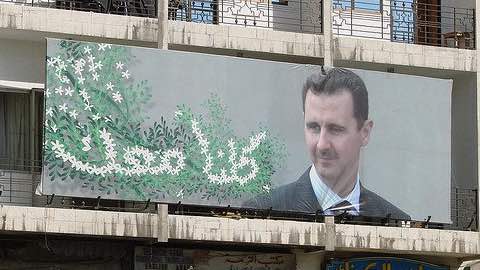 The regime of Syrian President Bashar al-Assad may not be as close to the brink as reported.

Recently, we posted about how Syrian President Bashar al-Assad was withholding chlorine for health purposes and, to almost as ill effect, using it as a makeshift chemical weapon. We commented that these measures may be a sign of his desperation. On April 28, the New York Times reported:

The Syrian Army has suffered a string of defeats from re-energized insurgents and is struggling to replenish its ranks as even pro-government families increasingly refuse to send sons to poorly defended units on the front lines. These developments raise newly urgent questions about the durability of President Bashar al-Assad's rule.

"The trend lines for Assad are bad and getting worse," said a senior United States official in Washington, who, speaking on the condition of anonymity to discuss confidential intelligence assessments, nevertheless cautioned that things had not yet reached "a boiling point."

At Foreign Policy, Aaron David Miller asks: Is Bashar al-Assad Finished, for Real, This Time, Again? "Of course," he notes, "this is the same question we've been asking ourselves repeatedly for the past five years now. … Is it going to be different this time?" For guidance, he sought out the University of Oklahoma's Joshua Landis and the Atlantic Council's Fred Hof.

Nusra and Ahrar al-Sham seem to have consolidated their leadership over the rebel forces [under the banner of the Army of Conquest] and have found a way to work effectively together. That is big.

As for the current tactical developments on the ground, they do not necessarily presage the fall of Damascus or the disappearance of the regime. There is ebb and flow in this conflict, and Iran may again (as it did in 2013) find ways to reverse regime losses with foreign fighters.

They have different opinions on the extent to which Iran would go to save Assad.

Alawite rule and Assad's regime is very important to Iran. Tehran may spend more money [to support the regime], but I find it hard to believe that it would send brigades of Iranian soldiers to fight in Syria.

The author asks where Syria will be a year from now.

Assad will still remain in control of Damascus and the coastal regions, but the city of Hama will either have fallen or be engulfed in war.

If Washington maintains an arm's-length approach to protection of civilians and political-military support of Syrian nationalists, one year from now the humanitarian abomination will have deepened significantly and the country will be uneasily and unofficially partitioned between IS and the regime as it hemorrhages people.

Let's end with this curious observation about the Islamic State by Hof:

The Islamic State (IS) is not part of the anti-Assad insurgency: it is an Iraq-derived phenomenon working often in tandem with the Assad regime to defeat Syrian nationalist alternatives to it and to the regime. Should IS change its target and go after the regime there would be a spirited and effective defense of Damascus -- with or without Assad -- because IS' reputation for sectarian slaughter is well-established.