The Need for a New Syrian Narrative 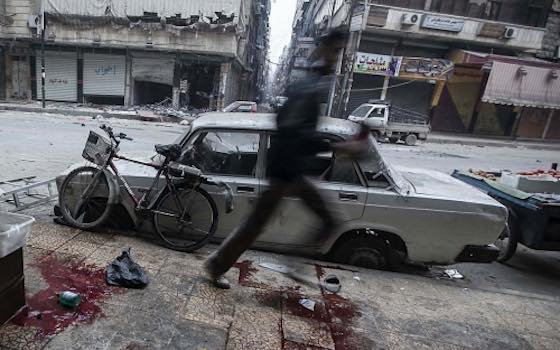 The Need for a New Syrian Narrative

The conflict in Syria is entering its fifth year, and the Syrian suffering continues. In the last week it was reported that the so-called "Islamic State" (IS) had attacked the Khabur region in the northeast of the country, kidnapped more than two hundred Assyrian Christians, including women and children, destroyed churches and provoked a mass exodus from these communities.

According to the United Nations High Commissioner for Refugees, António Guterres, the Syrian situation is "the most dramatic humanitarian crisis the world has faced in a very long time." Syrians are now the largest refugee population under UNHCR’s mandate. Further, more than 6.5 million Syrians are internally displaced persons (IDPs). Together, refugees and IDPs account for 40 per cent of the country's pre-conflict population, and at least half of that number is children.

The humanitarian tragedy and the security crisis created by IS and Al Qaeda-affiliated groups are the most visible and least contested aspects of the conflict narrative in Syria.

However, from the outset, different and competing narratives about the nature of the conflict were circulated by the international media. These narratives have increased polarization among Syrians and undermined attempts to resolve the conflict.

As the conflict escalated, for instance, the media promoted a narrative of "sectarianism" and a "Sunni and Shi'a divide". This narrative has obscured the role of global and regional geopolitical divisions and conflicting state interests in causing and sustaining the conflict. The sectarian narrative as well as other competing narratives have helped to create a version of history that, although "comforting" for its proponents, draws on a) overly-simplistic binaries of good versus evil, b) notions of ‘victimhood' and c) exaggerated claims to represent "the Syrian people".

The role of the media in shaping narratives

The media has played a key role in the formation of the various narratives that have shaped public opinion and the international community's perception of the drivers and dynamics of the conflict. In general, the media often focuses on extreme positions while rarely covering more moderate discourse. Moreover, because of the proliferation of online digital content produced by activists from both inside and outside Syria, the social media has tended to amplify the views of those with an interest in conflict while neglecting more conciliatory views.

The amplification in the media of extreme narratives has clearly influenced the international community's understanding of the conflict and some of the solutions that were suggested for resolving it. Marc Lynch, for example, has shown how assumptions derived from social media could be "reproducing very misleading analytical conclusions, creating artificial certainty, embedding false narratives, and encouraging counterproductive interventions" such as the call for military action against Syria in August 2013. Another example is the exaggerated assumption that the conflict is mainly sectarian and that the solution should be based on a kind of confessional power-sharing formula. In fact, the media has rarely covered Syrian voices that challenge the narrative of sectarianism or that emphasize a shared Syrian identity, equal citizenship or the possibility of national reconciliation.

The need for a unifying narrative

To work toward a political solution, a counter-narrative must be developed that focuses on what brings Syrians together. The approach to conflict resolution proposed by Johan Galtung suggests that conflicts should not be seen in simplistic ‘good versus evil' terms. Instead, conflict narratives must acknowledge the existence of difficult and unresolved issues which lead to frustration, aggression, and violence; and approach resolution efforts with empathy, nonviolence and creativity.

Successful conflict resolution processes in South Africa and Kenya can provide inspiration for addressing these critical issues at the start of the peace process by emphasizing the importance of developing an alternative narrative. In South Africa, full and equal ownership of one national narrative and of the process of change was an essential step towards peace and reconciliation. In Kenya, the national dialogue and reconciliation process (KNDR) following the post-election violence in 2007-08 sought to "anchor the idea of peaceful co-existence on bonds of citizenship," creating a national narrative that was seen as "a key prerequisite for the maintenance of a cohesive nation and for ensuring grounded long-term political stability and viability of the state." In both of these cases, people took responsibility for the past and promoted a unifying narrative.

A UN Security Council open debate in January 2014 recognized that divergent memories of war are often passed down in communities, where they can remain latent until stirred into violence. This suggests a need to bypass "zero-sum thinking" and to accept "shared national narratives" which help to repair trust and foster genuine reconciliation.

In Syria, stories about the war have developed in a way that harms national identity and obscures the history of peaceful co-existence. To counter this, there needs to be an honest and thoughtful process for writing a national narrative aimed at reconciliation, which integrates ‘enough of the truth' of the conflict for Syrians to feel that their suffering has been recognized, while emphasizing social resilience and solidarity in order to instil confidence in who Syrians are and what brings them together. This national narrative should provide the basis for any potential solution to end the conflict in Syria. By loosening the foundations upon which supposedly intractable issues are built, it can pave the way to the long process of reconciliation.

Rima Barsoum is a Syrian researcher and consultant for peace-building and dialogue projects, based in Geneva.

"The Need for a New Syrian Narrative"