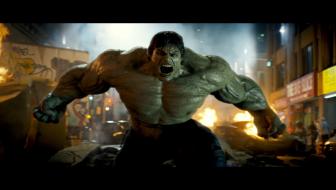 What do you know? A credible Incredible Hulk Movie.

"Incredible" overstates it, but "The Incredible Hulk" finds a viable way to retell an old Jekyll and Hyde story, dating back to the early 1960s and a Cold War that inspired its share of unruly Marvel Comics misfits.

"The Incredible Hulk" establishes a tone and the dramatic stakes necessary to support that story. In the realm of cinematic superheroism, that's saying something. And in its noisy "Transformers"-mayhem fashion, the movie's pretty exciting.

This version of "The Incredible Hulk" movie, directed by Louis Leterrier, plays the story for keeps without putting anyone on the couch, while heaping on the crushing, body-slamming death matches the average 13-year-old sociopath will lap up like Gatorade.

The film flies through the back-story in its opening credits. Fleeting, chaotic images of scientist Bruce Banner (Norton) undergoing experimental gamma-ray treatment reveal a fiasco. Banner believes the treatments will be for the Greater Good, but they're being conducted on behalf of Evil, in the form of a secret U.S. military weapons project. Having tasted blood and big-boy tantrums as the Hulk, Banner goes undercover, a fugitive from justice.

The story proper begins with Banner down in Rio, hiding out from the military brass among the throngs on the hillsides, working on his anger-management techniques, working at a bottling plant. Why Rio? Because Rio is a terrific locale for a chase, with Banner leaping from rooftop to rooftop, pursued by William Hurt's Gen. Ross and his special-op fighters.

Like Norton, Tim Roth isn't a Central Casting choice for a comic-book movie. The British actor plays Emil Blonsky, tool of the U.S. military (he was a KGB weasel in 1967, when Marvel introduced him) who becomes The Abomination, foe of Hulk and ordinary citizen alike. I find Roth to be a predictable ham in a lot of pictures, but sometimes a new context frees up an actor to try other things, and in "The Incredible Hulk" Roth works more effectively than he has in years.

The two most elaborate action sequences take up a good chunk of the running time. One pits Banner/Hulk against the ops on a university campus. The other--the film's climax--has Banner willingly transforming into the Hulk in order to vanquish the Abomination, who's stompin' at the Savoy, metaphorically speaking, as he trashes half of Harlem. Leterrier, who brought 10 tons of greasy flashy style to "Transporter 2," may be a sap for the sudden slow-mo change-up. But until the last 20 minutes, which stumble around in an attempt to set up a sequel, "The Incredible Hulk" keeps slamming everything forward, satisfyingly.

Two points about the soundtrack. One: The volume levels of the WHAM!!!! KRRRAAANGGG! BOOOOMMPH! effects are best described as "ouch!" Two: "The Incredible Hulk" features the dullest musical score of the year. Perhaps these two factors cancel each other out. At any rate, Norton is an interesting enough actor to flesh out Banner's Jekyll-and-Hyde dilemma. I have no idea how much the actor meddled with the script. But it works. As for Liv Tyler, the general's daughter and Banner's ex, well ... she's OK. She never really does enough one way or the other to tip a film in any direction. Primarily, opposite the thin-lipped Norton, she brings enough of her own lip to share close-ups with all four of the Fantastic Four, let alone one green giant with a blackout temper and stretchy pants for all occasions.