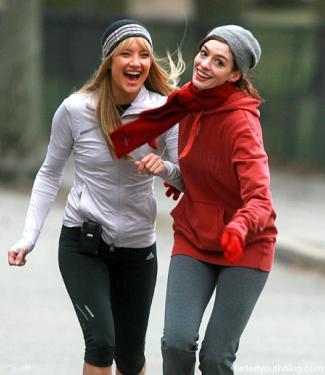 The timing of this picture's release is unfortunate, as is the picture itself.

Now, the target audience may disagree with me. (The combined international gross for last year's "Made of Honor" and "27 Dresses" was $266 million, not counting DVD sales and rentals.) But "Bride Wars" really does not capture the mood of the moment.

It comes from a different time, a different planet. Watching the characters flit from Vera Wang fitting to wedding-planner meeting, you may feel like forcing these two to do a few hundred hours of community service at a homeless shelter.

The best Depression-era movies macked on extreme wealth while needling its privileged economic royalty. "Bride Wars" barely rouses itself to deliver a joke, and its sense of upper-middle-class privilege feels smug.

Liv (Hudson), the rich lawyer, is meant to be the less initially sympathetic one, whose boyfriend (Steve Howey) is Patience and Understanding incarnate. Emma (Hathaway) is a heavily enabling middle-school teacher whose live-in boyfriend (Chris Pratt) seems nice enough at first, although certain intolerant mutterings suggest that Emma might be better off with some dreamboat-in-the-wings on the order of Liv's brother (Bryan Greenberg).

Both ladies are supposed to be 26; they act like they're 11.

After an intimidating consultation with the doyenne of New York wedding gurus (Candice Bergen) they're mistakenly double-booked, and neither backs down, and they spend fully half the movie playing humiliating pranks on one another.

Surreptitiously Emma keeps sending Liv chocolate and cookies so she'll be too fat for her wedding dress. (Har.) Liv switches spray-tan colors on her former pal so that she turns a burnt orange. (De-har.)

Half the comedies made in Hollywood are based on the premise of boy-men acting like idiots.

Switching the gender and toning down the vulgarity to a PG level offers only change, not improvement. I cannot believe the "Bride Wars" script was written by a "Saturday Night Live" actress/writer (Casey Wilson) and a fellow improv-based performer (June Diane Raphael), although I can believe that the co-writer of "Saving Silverman" (Greg DePaul) worked on it.

Director Gary Winick did nicely by the recent "Charlotte's Web," but he shoots this material like a mid-'90s sitcom on the WB. Filmed mostly in Boston, the film has the advantage of a fine cinematographer, Frederick Elmes, who has done fantastic work for, among others, David Lynch. Here, though, he's stuck with drab hotel interiors and toothsome close-ups of the stars.

After rising to the challenge of "Rachel Getting Married" and, earlier, helping to make "The Devil Wears Prada" such a savvy surprise, watching her struggle with this bourgeois hack-work is sort of depressing.