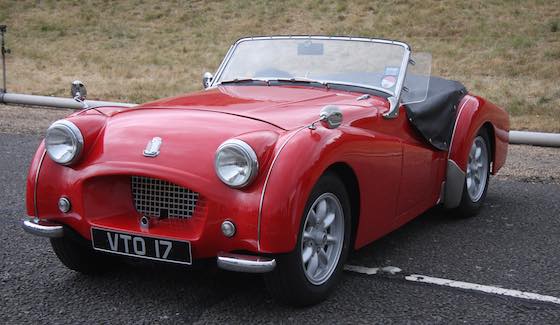 Triumph is a strange name for a motorcar company with little apparent will to survive. But, the British nameplate did offer one model that deserves to be honored in the pantheon of the greatest cars of all time. Somehow the venerable British car company Standard got all the planets to align in the TR-2, if only for a few moments, and the result was a classic.

Triumph is a strange name for a motorcar company with little apparent will to survive.

But, despite its undulating course that flowed mostly downhill, the British nameplate did offer one model that deserves to be honored in the pantheon of the greatest cars of all time.

Somehow the venerable British car company Standard got all the planets to align in the TR-2, if only for a few moments, and the result was a classic.

For the Triumph name to grace the TR-2 in 1953 was something of an upset. By that year Triumph, at least as it related to motoring contrivances, had gone through a dizzying litany of ups-and-downs, with downs definitely holding the upper hand. The company that first brought Triumph motorcars to market in Britain had grown from a venture started in 1884 by a German immigrant named Siegfried Bettmann. After a stint as a translator with the White Sewing Machine Company, Bettmann got into the business of importing bicycles into Britain, bicycles on which he plastered his own name. By 1886 Bettmann had replaced his surname with the Triumph trade name, figuring that Triumph was readily understood in a number of languages, and by the end of the decade Bettman's concern was manufacturing bicycles of its own in Coventry.

Of course the late 1880's were not just the era of England's most famous murderer, Jack the Ripper; it was the time when the internal combustion engine came into general use. So it wasn't much of a stretch for the Triumph Cycle Company, Limited to consider adding motor-powered cycles to its line of well-engineered bicycles. Chief engineer and partner Maurice Schulte, also German-born, strongly considered producing Hildebrand & Wolfmuller motorcycles under license, and he even imported one for testing in 1895, but that potential deal died-as did a similar plan to build Beeston Humber motorcycles right before the turn of the century.

Finally, in 1902, Triumph introduced its own motorcycle. Designed by Shulte, it featured a one-cylinder Belgian Minerva engine that produced somewhere between one-and-a-half and three horsepower. The engine was attached to a standard Triumph bicycle frame, which retained foot pedals in case the engine conked out. The machine and the very similar models that followed it were commercial successes, and soon Bettmann and Shulte decided to team up to build complete motorcycles.

The first of the all-Triumph models came off the factory floor in 1905. Designed by Shulte and factory manager Charles Hathaway, the motorcycle featured a 300 cubic centimeter displacement side-valve engine that produced three horsepower. Though it doesn't seem like much, the power plant gave the rudimentary cycle a cruising speed of about 35 miles per hour and a top end of about 50-good performance circa 1905. The new bike was a sales success, but hardly a runaway winner with sales of just 250 the first year.

On the strength of racing victories and continuous innovation, sales grew exponentially for the motorcycle pioneer. By 1910, Triumph was building thousands of motorcycles a year, offering a board selection of models. Then, by 1913 the company introduced a model designed specifically for women, called, demeaning enough, the baby Triumph.

During the War to End All Wars, Triumph was a stalwart friend of the Allies despite Bettmann's German background. The company supplied more than 30,000 of the company's Model H motorcycles to the war effort before hostilities ended on November 11, 1918.

Once the tragic war ended, it looked as if Triumph could anticipate nothing but good times in the post-war environment. Its motorcycles won thousands of fans from various military branches, and pent-up demand seemed to spell boom times. But Bettmann had grandiose plans for his company, of which his partner Shulte wanted no part. Bettmann wanted to build motorcars.

Rather than convincing his chief engineer that auto manufacture was a good idea, Bettmann bought Shulte's share and sent him packing. In his place Bettmann hired Claude V. Holbrook, a colonel who had been responsible for motorcycle procurement in the British army during the war. Oddly, Holbrook wasn't thrilled with the idea of joining the hotly competitive automobile market either, but Bettmann was persuasive. By 1923 Triumph had introduced its first car, the 10/20. A 23-and-a-half-horsepower 1.4-liter four-cylinder engine powered the attractive touring car, and its introduction was greeted by collective yawns from the public. 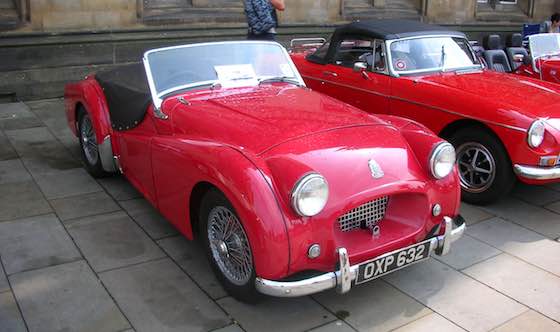 Despite the founder's insistence, car manufacturing at Triumph had a faltering start, and things never really got much better. In the late Twenties the company introduced a Super Seven model that did take some sales away from the Austin 7, Britain's answer to the Model T, but the Depression that followed the stock market crash of 1929 threw another crimp into Triumph's plans for success in the automotive field. In fact, the setback was so severe that Bettmann was forced out of his management position, and by 1935 he was ousted from the company he founded.

The mid-Thirties also produced a few other seemingly oddball changes. With the motorcycle business humming in 1935 and the car business floundering after a decision to quit selling family cars in a bid to go "up-market," Triumph executives decided to suspend motorcycle production to jump-start the car side. That, predictably, didn't work, and so the following year management decided to sell the motorcycle business to a competitor headed by John Young "Jack" Sangster. He almost immediately appointed Bettmann chairman of the revived Triumph Engineering Company, whose successor firm still builds respected motorcycles today.

Through the Thirties Triumph produced some sporting cars of note. Donald Healey, who would later become famous in America for his Austin-Healey sports cars, joined the company in 1933 and was responsible for establishing the marque's performance image. That image was strengthened by Healey's Dolomite roadsters and by Rob Green's Vitesse saloons (sedans) that came just before World War II; and though the cars were lookers, they weren't big sellers. As the Thirties ended, the company again shifted gears, turning away from sports cars to emphasize near-luxury sedans, but that did little to help its flagging fortunes. By 1940 Triumph had been reduced to a shell of itself and was forced into receivership having built just 35,000 cars in its 17 years of manufacture.

With Britain embroiled in World War II, that might have been the end of the Triumph story, at least as it related to automobiles, but there was an angel waiting in the wings in the form of Sir John Black, head of the Standard Motor Company. Legend has it that Black bought the Triumph name from the latest receiver because he wanted to build a sporting marque that would out-do the Jaguars of his rival Sir William Lyons. In any case, immediately after the war Standard introduced two all-new Triumph models, the 1800 Roadster and the 1800 Town & Country. These followed a few years later by the Triumph Mayflower, a car that Black hoped would help crack the American market.

Sadly for Black, Americans didn't take to the Mayflower's dreary styling. He was bounced from Standard just before the car, the TR-2, that carried the torch for Triumph in America was introduced. Unveiled at the 1952 Earl's Court Motor Show, the Triumph "Sports" or TR-1 borrowed heavily from the Mayflower mechanically, but offered a functional if not exactly beautiful two-seat body. Frankly, the rear end of the concept car was pretty hideous, but it did show enough promise that it was eyed as a production model that could capitalize on America's growing fascination with sports cars.

Ken Richardson was brought in as the company's chief test engineer, and he fought for a vastly revised chassis, calling the first iteration "a bloody deathtrap." Changes were made both to the chassis and the rear end styling, and by March 1953 the now re-named Standard Triumph TR-2 was one of the hits of the Geneva Motor Show. Either by design or serendipity, the TR-2 fit in beautifully between the MG TD, which was ancient, slow but relatively cheap, and the Jaguar XK 120, which was new, fast and much more expensive. The TR-2 offered an economy version of the Jaguar's lush exterior styling plus performance that put the TD to shame. 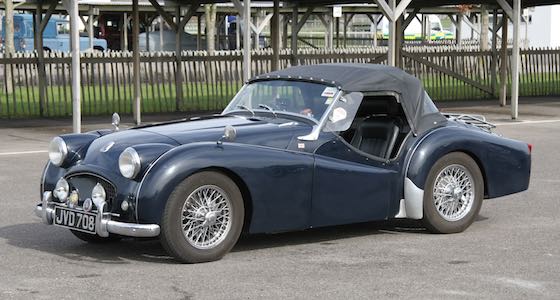 Like the Chevrolet Corvette, which debuted at almost the same time, the TR-2 borrowed heavily from its more mundane brethren within the company. The TR-2 was built on an X-braced ladder frame with coil spring and wishbone suspension up front and a live rear axle on semielliptic leaf springs. Behind the grille-less front opening was a 1991 cubic centimeter overhead-valve four-cylinder engine that featured twin SU carburetors. The dual-carb set-up was about the only aspect that differentiated it from the Standard Vanguard engine in use at the time, and power output was a less than riveting 90 horsepower at 4800 rpm.

Still, for its time, the TR-2 was definitely a performance car. It negotiated its way from zero to 60 miles per hour in 12 seconds and had a top speed of 105 mph. Sure, your basic economy car could easily out-run that today, but in 1953 this was performance territory, especially when combined with taut handling.

Equally important to the car's success was the honest body drawn up by Walter Belgrove. Though the American public didn't take to his Mayflower sedan, it did eat up the TR-2 and its very similar successors, the TR-3 and TR-3A. The sleek fender lines and very low, cut out doors invited drivers to leap into the driver's seat rather than struggle to locate the interior door handle, which was the only door handle provided. A pretty cool feature if you were an Ivy League jock vintage 1955.

The car also earned itself some racing renown, including a respectable showing in the 1954 Alpine Rally. That same year a TR-2 finished 15th overall at the 24 Hours of Le Mans, and the car would go on to be a club racing legend as well as a successful rally machine.

In all, before the TR-3A ceased production in 1961, some 80,000 TR2's, TR-3's and TR-3A's were built, a record that dwarfed the marque's pre-war manufacturing figures. No one will ever call the Triumph TRs the greatest cars of all time or even the greatest sports cars of all time, but they played their part in America's love affair with the sports car, justifying the immigrant founder's dream of building cars in his adopted homeland.