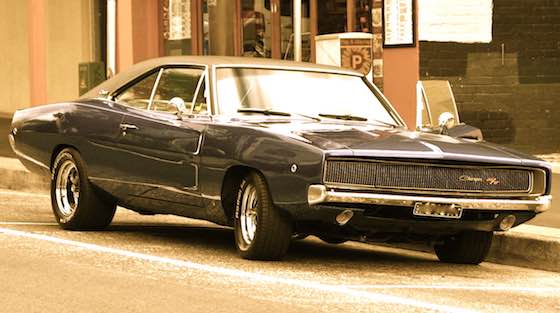 Based on the Coronet, it wasn't much of a looker. But who could forget the Dodge Charger's menacing full-width grille with those hidden headlights.

It takes a long memory to recall the mid-Sixties, but to fans of American-designed, American-built automobiles, those were the glory days. With the odd-ball exception of the Volkswagen Beetle, foreign competition was but a fly-spec on the landscape. Fuel was plentiful and cheap, and big engines were unencumbered by pollution-control devices. It was an era of unlimited possibilities and unbridled optimism. America had defeated Hitler and held back the Communists in Korea, reaching a balance of power with the Soviet Union. Vietnam was yet to be lost.

American cars of the era reflected the very personality of the country: brash, powerful, brutally honest and unwilling to take a backseat to anybody. It was a decade of the Chevrolet Corvette, Pontiac GTO, and Ford Mustang -- cars that might not have been as sophisticated as those coming from the top European manufacturers, but cars that had enough brute strength to take on all comers. In those days, even the best BMWs and Porsches were stifled by small-displacement engines dictated by European taxes and fuel costs; Ferraris had difficulty with reliability; and Mercedes-Benz was building solid, boring sedans with a remarkable resemblance to the Checker Marathon. The Japanese? At the very best, their little-bitty cars were a joke compared to the majesty of American iron.

On the street and on the track, power and more power were the watchwords. Since the late Forties, the NASCAR circuit had been a battleground of horsepower, and The Chrysler Corporation had enjoyed a good measure of success, especially with the Chrysler 300s of 1955 and 1956 that absolutely dominated the series. Through the early Sixties, Ford held the advantage on the track with drivers Fireball Roberts, Marvin Panch, Fred Lorenzen and Ned Jarrett. But then, in the middle of the 1964 NASCAR season, Chrysler dropped a bombshell when it unveiled its "hemi-powered" Plymouths and Dodges.

Of course, the hemi concept wasn't new. Dodge, Chrysler and DeSoto had all employed engines with hemispherical combustion chambers in the Fifties. The vaunted Chrysler 300s were equipped with "hemi" V-8s, and the 1956-model engine was said to produce 355 street horsepower from its 354 cubic inches, a very enviable number. But the hemi that Chrysler introduced to NASCAR in 1964 took the concept about as far as it could go. For one thing, it displaced a monstrous 426 cubic inches. For another, it refined the hemispherical head's natural advantages.

The key advantage of the combustion chamber shape, which was roughly half a globe, was that it allowed huge intake and exhaust valves on opposite sides of the combustion chamber. More air in and more air out equated to more horsepower. The heavy breathing was aided by the central location of the spark plug that facilitated more even fuel burning. Of course, the valvetrain was more complex that the typical American V-8 with double sets of pushrods, rocker arms and rocker shafts. But, though it was costly to build, it had the strength of a brick outhouse. In the Plymouths the hemi engine was called the "Super Commando," while in the Dodges it was called the "Hemi Charger."

Of course, the Hemi-Charger was installed in the Dodge Charger, right? Well, no. And in fact, NASCAR put a big crimp in Dodge's marketing plan when it banned the hemi engines at the beginning of the 1965 racing season, only to reinstate the engine with special circumstances later in the year. But the die had been cast, and Dodge execs were prepared to use the windfall of NASCAR publicity surrounding their Hemi-Charger-equipped models with a car that had a more masculine moniker than the Coronet, which up to that time had been their answer to the Pontiac GTO. Thus, the Dodge Charger was born as a 1966 model. One might guess that the newly introduced Dodge Charger would be equipped with the famed "Hemi-Charger" engine, but that guess would be wrong. Dodge brass weren't too keen on putting the ultra-expensive-to-build 426 Hemi into more cars than they had to to satisfy NASCAR homologation rules, so the standard engine in the '66 Dodge Charger was the 383 cubic inch, 325-horsepower V-8 with conventional heads and combustion chambers.

That first Charger, based on the prosaic Coronet, was an odd-looking piece; it's fastback roofline a bit ungainly on its lengthy 117-inch wheelbase. The car's bows to sportiness were the headlights hidden in the full-width grille, radiused rear wheel openings and four-bucket seats. One advantage of the fastback roofline was nearly station wagon-like carrying capacity with the rear seats folded. That was nice, but it wasn't going to win you any street races. Still, at the reasonable base price of $3,122, the Charger sold in reasonable numbers in '66 and in '67. 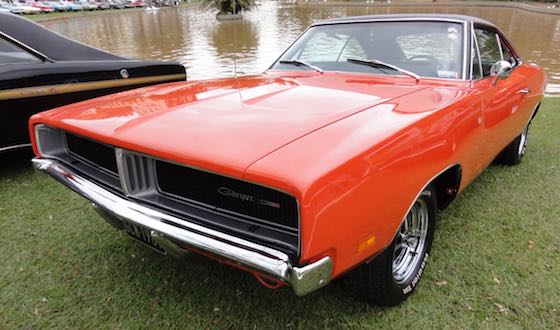 Dodge then came out with a much-improved redesign of the Charger in 1968 model year. Featuring a Coke bottle-shaped profile, the Bill Brownlie-designed body had a wide-mouth grille with hidden headlights and a pert upturned spoiler on the decklid. The pillarless greenhouse had a very fast rear roofline tapering into the trunk. With "mag" wheels and white-lettered tires, it certainly had curb appeal. The unibody chassis relied on mundane independent front suspension with a horse-and-buggy leaf spring-live axle rear suspension. And the engine? The 426 hemi, right? Well, sometimes. But most Chargers were fitted with other Mopar engines, with the 440 cubic inch "wedge" engine, sporting 375 horsepower a popular choice for the street.

While the '68 Charger was a looker and a street racer to be reckoned with, Mopar racing mavens discovered that the design wasn't very good for the track. Both the blunt nose and indented backlight (rear window) were aerodynamic disasters, so for the 1969 NASCAR season Dodge created a special sub-model dubbed the Charger 500 that remedied these ills. NASCAR dictated that 500 examples of the Charger 500 be built to qualify it as a stock car. Unfortunately for Chrysler, though, Ford had gone even farther in the creation of its Ford Talladegas and Mercury Cyclone Spoiler II's, so the Charger 500's were usually also-rans.

Midway through 1969, the folks at Mopar racing decided they would not be outdone, creating what have to be the most outrageous "stock" racings car ever built. Drawing from research conducted at the George C. Marshall Space Flight Center, Chrysler engineers covered the Charger's nose with a pointed end-cap. Extreme as that change was, however, it was nothing compared to the giant wing that jutted up from the rear decklid. Christened the Dodge Charger Daytona, the car was again built in limited numbers to satisfy NASCAR's homologation standards. 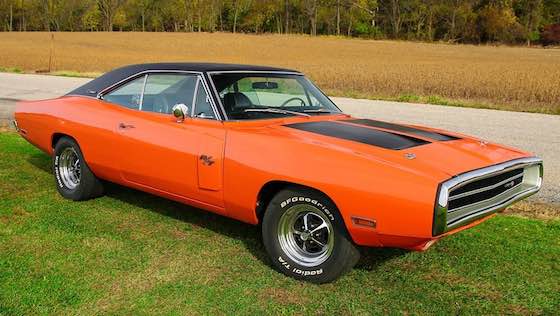 In this form, with the 426 hemi pumping under the hood, the Dodge Charger and its close cousin, the Plymouth SuperBird, became the dominant cars of the 1969 and 1970 NASCAR Grand National seasons. The cars frequently ran at well over 200 miles per hour on the superspeedways of Daytona and Talladega, and they led directly to the institution of the "restrictor plate," a speed-limiting device that is still with us today.

For the street, the Dodge Charger Daytona became the last, illogical conclusion of the muscle car era. Only about 500 were built, and a relatively small number of them actually had the 426 hemi engine. Others were powered by the 440 cubic inch V-8, which was still a potent combination. Though not the prettiest of supercars, the Dodge Charger Daytona certainly had a personality all its own. And once you saw one, you would certainly never forget it.