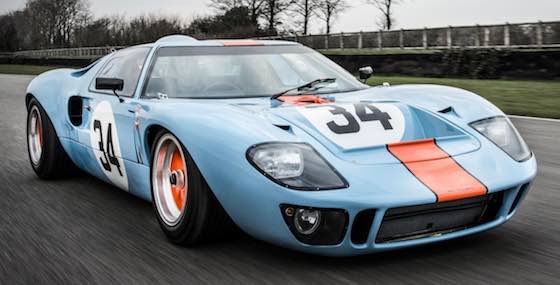 Henry Ford II made a commitment to European-based racing like Formula One and endurance GT competition with the Ford GT40.

The first lesson to be learned here is simple: don't piss off a guy with a billion dollars.  Just who committed this grievous sin?  And just who was finally made to pay for it?  None other than Enzo Ferrari, the former mechanic turned owner-operator-maestro of the fabled racing empire that bears his name.  Though the Italian never acknowledged it, the experience did teach him a peculiarly American life's lesson, namely, paybacks are a bitch.

It all started this way:  In the early Sixties, one of the movers-and-shakers at Ford Motor Company was a man of Italian heritage named Lido (Lee) Iacocca.  Now renowned as a television pitchman, Iacocca at that time was a key executive at Ford Motor Company and was largely responsible for bringing a performance image to the Ford brand by backing projects like NASCAR racing and the landmark Ford Mustang ponycar.

But on the stage of global motorsport, NASCAR was looked at as a hick American affectation.  Whatever success Ford had in NASCAR, and over the years it had plenty, it held no sway in Europe, South America or the Orient.  That was a situation Iacocca wanted to change, so he persuaded his boss, Henry Ford II (nicknamed "The Deuce"), that making a commitment to European-based racing like Formula One and endurance GT competition would help make the cash registers ring.  Ford, who liked to hear the cash registers ring, was all ears.  He asked Iacocca how they should go about it, and the short answer was "Buy Ferrari."

Maybe at first glance that plan seemed far-fetched, because even in the early Sixties, Ferrari was already a legendary marque with an enviable racing record.  But, at the same time, as a money-making enterprise Ferrari was not nearly as successful as one might have guessed from its on-track successes.  From Bentley to Duesenberg to Lotus, makers of racing machinery have had a notoriously difficult time actually generating profits, and the same held true for Ferrari.  For one thing, Enzo cared a lot more about winning races than making cash.  For another his road cars, though often spectacular, sold in miniscule numbers and were, in the overall scheme of Ferrari's priorities, an afterthought.

So when Ford Motor Company put out some feelers to Il Commendatore about the possible purchase of Ferrari, the initial response was warmly greeted.  Further meetings ensued; Henry Ford II got involved on a personal level; and it looked as if those strange bedfellows -- the American industrial giant and the Italian cottage industry -- would wind up hitched.  But as the deal neared completion, Enzo Ferrari seemed to get cold feet.  In retrospect it is impossible to determine exactly what went wrong.  Some say that, as part of the deal, Ford refused to let Ferrari (the man) continue to control Ferrari racing operations, which was tantamount to refusing to let him continue to breathe.  Others say Ferrari, both shrewd and competitive, had never been serious about getting into bed with Ford (the company) in the first place.  Like a conniving Italian Lothario, the thinking goes, Ferrari was just using Ford to make Fiat jealous and thus to persuade the Agnelli family they had better take a partial ownership role in Ferrari, all the while letting Enzo control the racing operations, something they eventually did.

For whatever reasons, Ferrari backed away from the Ford deal, and the Deuce was, well, mad as the deuce.  He expected to have the Ferrari race team as his new playtoy and, instead, he had been jilted at the altar.  So, in the fine American tradition epitomized by the phrase "Don't get mad; get even" Henry Ford II decided he would teach Enzo Ferrari a thing or two about whom he should and shouldn't mess with.

Simply put, Ford ordered his minions (and he had lots of minions) to win what many perceive to be the most important race in the world -- the 24 Hours of Le Mans.  This, of course, was a tall order, since no American race car had ever won the Le Mans 24 hours and very few had even come close.  More than three decades before, in 1928, Stutz had made the best shot at it, finishing second, and that same year Chryslers finished third and fourth.  In the Fifties, Briggs Cunningham tried to turn the trick with his special Cadillac-powered racecars, but his best results were third-place finishes in '53 and '54.  But this didn't stop Ford.  He wanted to beat Ferrari in the worst way, and the good news was he had the cubic dollars to do it.

As things happened the Ferrari deal went sour in 1963, and the Deuce put out the directive that a Ford-branded GT racecar would compete at Le Mans in June 1964 -- not much lead time.  But Ford quickly employed former Aston Martin racing team major domo John Wyer to boss the effort, brought in Carroll Shelby, who happened to be a former Ferrari driver himself, as a consultant, and the team started hustling.

Very rapidly Wyer ended up in Eric Broadley's Lola racecar shop, because with so little time to move the project forward he knew it was impossible to start from scratch.  So the mid-engine Lola GT became the basis of what was to be dubbed the Ford GT40, but by the time the makeover was completed the new racer was a very different animal.  Ford stylists in Dearborn, Michigan, set to work on the car's exterior design, and their handiwork was tested in a wind tunnel at the University of Maryland.  Meanwhile, Shelby, who knew more than a few tricks to wring horsepower out of Ford V-8s, set to work to make the mundane 289 cubic-inch pushrod engine produce racing-winning amounts of reliable accelerative force.

The Ford GT40 was introduced to the public at the New York Auto Show in the spring of 1964, a heady time because it also was marked by the introduction of the original Mustang.  And frankly Ford risked upstaging itself, because new to the sleek, snarky, 40-inch-tall GT40, the Mustang looked like a kiddie kar.  But the GT40 also proved that Ford wasn't kidding about going endurance racing against the likes of Ferrari.  It had all the right stuff - sheet-steel monocoque mid-engine configuration, transaxle with ZF gearbox and disk brakes that would stop a Greyhound bus.  Yet, amazingly, this brutish-looking beast weighed just 1,835 pounds.

And so on June 20, 1964, Ford Motor Company came to Le Mans.  The company entered three factory racecars: GT102 driven by Phil Hill and Bruce McLaren, GT103 driven by Richie Ginther and Masten Gregory, and GT104 driven by Dickie Attwood and Jo Schlesser.  If you believe in fairy tales, you probably think one of them won the fabled race, but no, it wasn't that easy. Unfortunately, the Attwood/Schlesser car caught fire on the Mulsanne Straight, and transmission failures doomed the other two cars, but not before they had put an unholy scare into one Enzo Ferrari.  For one thing, while the Ford GT40s were running, Hill set a new lap record (131.38 miles per hour) around the legendary course.  But the bottomline is, Ferraris finished one, two, three.

That, of course, did not sit well with Mr. Henry Ford II. But he was undaunted in his quest to beat Ferrari at its game, so for the 1965 race, he invested even more cash, and Ford fielded six cars, two powered by immense seven-liter (427 cubic inch) NASCAR racing engines.  With some 500 horsepower on tap, these GT40 Mk IIs had a top end of some 210 mph.  Phil Hill again set a lap record, but before the 24 hours had elapsed all the Fords broke and Ferraris finished one, two, three again.

This was getting monotonous -- and irritating.  But Ford decided to apply more money to the infested area.  For the 1966 race, the field included 13 (Good God, 13!) GT40s, three prepared by Shelby American, three by Ford's NASCAR race shop, Holman & Moody, and the others by "independent" teams.  Seven of the 13 were 500+ horsepower 427-engined versions.

Again, the Fords were amazingly fast, but as the race unfolded, the old, familiar thing began to happen -- they started to break.  One by one they fell from the field, heartbreaking because they were so fast.  Surely the Deuce began to fear he had another debacle -- and a damned expensive one at that -- on his hands.

But this time things would turn out very differently, because this time three of the Ford GT40s didn't break.  And, somewhat coincidentally, they finished the race in an unaccustomed position -- one, two, three.  In fact, the Fords were so far in front at the end that team orders went out that they should try to finish in a three-way dead heat, because the American marketers thought a French three-way would have enormous advertising potential back in the States.  The MkII driven by Chris Amon and Bruce McLaren was officially declared the winner.

Ford might have stopped there, but the crew now had a good thing going.  Driving lighter, even more powerful GT40 Mk IVs, built in the U.S. by Kar Kraft, the team of Dan Gurney and A.J. Foyt won the race and Bruce McClaren and Mark Donohue finished fourth.

Two in a row proved enough for the Deuce, and Ford Motor Company decided to quit its official involvement in world endurance GT racing, but that didn't stop the Ford GT40s from winning victories at Le Mans in 1968 and 1969 under the management of John Wyer and his Gulf Oil team. The '69 victory was especially impressive since it was accomplished by Jacky Ickx and Jackie Oliver in a car that had run at Le Mans in 1968.

What this all meant was that, after the snub by Ferrari, and after millions upon millions of dollars plus the time, effort and sheer nerve of many, many intrepid racing men, Ford won the world's most glamorous race four consecutive times.   In other words, Mr. Ferrari, as far as we Americans at Ford are concerned, you can eat...well, what you can eat sure ain't pasta.