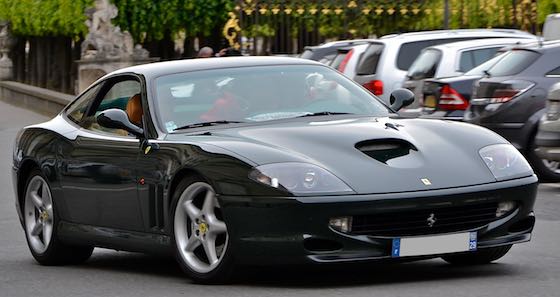 The Ferrari 550 Maranello, an exotic sports car with truly stupefying performance potential, doesn't have to subject its driver and passenger to extravagant amounts of physical travail.

Face it, we're getting older. And if it's difficult for you to look that undeniable prospect in the eye, know this: the marque with the youthful verve of Italian brio, that forever-young emblem of the European playboy, has come to terms with age and aging. Ferrari knows you're getting old. Further more, it has actually done something about it. One of its latest in a string of truly outstanding cars recognizes the limitations and advantages of age, and it revels in both. The 550 Maranello is a living embodiment of progress and of adapting to reality, a testimony to the fact that, in the 21st Century, you can have your cake and eat it, too.

What the 550 Maranello proves is an exoticar with truly stupefying performance potential doesn't have to subject its driver and passenger to extravagant amounts of physical travail. It demonstrates that eye-stopping looks and reasonable creature comforts are not mutually exclusive. It shows that, by God, we have learned something since the 1980s.

The 550 Maranello was designed to replace one of the other worthies on our list of the greatest cars of all time, the Testarossa and its progenitors, the 512TR and F512M. And while the Testarossa was the steel and glass epitome of Eighties excess, the 550 Maranello moved beyond that "greed is good" ethic to a new standard. It is a vivid reaction to the ludicrous outrageousness of the Lamborghini Countach and Diablo, outrageousness that was only slightly toned down in Ferrari's competitor, the Testarossa. And while it certainly lacks the visceral punch of those three rolling billboards of opulence, in all other ways it is a better car.

If a car is meant to be driven, instead of simply ogled or used as a sandwich board that, proclaims "Yes, I'm rich," then the Maranello is a design triumph. Its body is gorgeous, if a bit familiar, and, at the same time, its shape takes into account that the rich, like the rest of the population, are getting older. It recognizes that the rich don't want to turn themselves into Bavarian pretzels to climb into their precious automobiles, nor, once in them, be forced to make their bodies do things that sailors wouldn't ask Far East fancy house girls to do simply to get the vehicle in gear. It acknowledges that the rich don't like the sounds of ringing in their ears any more than do punch-drunk former prizefighters. And it accomplishes all this in a vehicle that will take a back seat to none in the department of performance.

As Ferrari itself describes its creation, "The 550 Maranello is Ferrari's intepretation of the 12-cylinder berlinetta, with a front engine and a pronounced sports personality, for the 21st century. The brief given to the technicians was particularly demanding: design and build a car able to meet the needs of Ferrari customers looking for driving emotions and exciting performance, who do not want to forego driveability or comfort. Customers attracted by state-of-the-art technical proposals from a company, which has always treated design as an aesthetic solution to the demand for performance, and has always built its cars with sophisticated craftmanship."

Okay, so Ferrari's spelling and grammar aren't quite up to the level of its "craftmanship." You still get the picture here. In the 550 Maranello, Ferrari made an effort to build a car with vivid performance, and, at the same time, it backed away from the customer-vexing habits of some of its previous models. To its credit, Ferrari didn't deviate too far from its character, especially in delivering on-the-edge performance in terms of acceleration, top speed, braking and grip, but it did so in a package that was taller and easier to get in and out of than the model it replaced.

Just having the guts to draw a design with a roofline higher than its predecessor deserves a gold star for its Pininfarina creators, but the 550 Maranello offers more than that to its occupants. In the Maranello, the company that had previously offered its customers hundred-thousand-dollar machines with sliding Plexiglas windows, actually admits that it built creature comforts into its new design. Ferrari says that when its artisans penned the Maranello, they paid a great deal of attention to the "quality of life on board," items like driving position, passenger comfort, soundproofing, luggage space, and, glory be, climate control. From Ferrari?

Yes, from Ferrari. And if the taller roofline and more rational ergonomics weren't a big enough risk, the premier Italian marque took another giant leap that the wrong-headed might see as a leap backward - to a front engine design. But when one looks at the design question rationally (what, a "rational" exoticar?) one has to see the wisdom of the front engine placement. Mounted in the front, the V12 powerplant doesn't require the troublesome lengths of tubing for cooling that a mid-engine design mandates. Mounted in the front, the V12 powerplant doesn't beg for side-mounted radiators accented with "strakes." Mounted in the front, the V12 powerplant can be fitted in a straightforward fashion, rather than using oddball mechanical contrivances simply to get the power to the two rear wheels. Though it might seem heresy to Ferrari loyalists, the Maranello's design silently acknowledges that the engineers who work for General Motors designing Corvettes might actually be onto something. In fact, loath as Ferraristis are to accept the fact, the Maranello's similarity to the Chevrolet Corvette continues into the engine compartment, at least in terms of displacement. But we don't want to push the analogy too far, because the super-sophisticated, super-complicated Ferrari engine differs greatly from GM's latest V8 in philosophy, if not so much is output.

The engine that powers the car is a 5474 cc (334 cu. in.) 12-cylinder with its banks separated by 65 degrees. No one can question the complexity of the engine with its dual overhead cams and 48 valves, but Ferrari notes that the engine's most outstanding feature is the fact that "it delivers peak torque from 3000 rpm" instead of at the astronomical rpm ranges of some previous Ferrari street engines. Actually, the Maranello's engine hits its torque peak of 419 pound-feet at 5,000 rpm, but the torque curve is so flat from 3,000 and above that the company's press material isn't lying.

If one didn't know better, it would seem that Ferrari was trying to emulate the strong low-end torque of engines like the big American V8s, and in essence, it is, in practice if not in theory. The key reason? Strong low-end torque makes a car "feel fast," and it makes it easy to drive in most day-to-day conditions, where peaky engines are a bane. 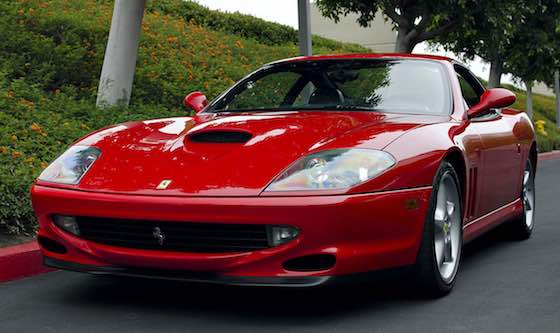 Around town or even on the freeway, the maximum power output of 485 horsepower at 7000 rpm is nearly a moot point. But the huge gobs of horsepower do come into play when the goal is top speed, and the Maranello has a top speed to be reckoned with. Ferrari claims a top end of 199 miles per hour, and while that might be a hair optimistic, Car and Driver magazine, for one, has turned in lap after lap at the fabled Transportation Research Center at well over 190 mph.

There isn't a huge amount of technological trickery in the engine compartment, just good, solid engineering techniques taken to the nth degree. For instance, the engineers fought the battle of the bulge and won. Both the engine as a whole and, equally important, its reciprocating components are extremely light. The aluminum alloy engine weighs but 518 pounds. The cylinder case, heads and the oil sump are made of light alloy, and the block has damp press-fitted aluminum cylinder liners coated in Nikasil.

Inside the engine, the connecting rods are fashioned from Ti6a14V titanium alloy, which made it possible to lighten the counter-weighting of the drive shaft, in turn improving the response and balance. At the same time, Mahle forged aluminum alloy pistons don't simply lighten the reciprocating masses, they also have a special crown design to enhance the thermodynamic efficiency of the combustion chamber.

Engine management is very sophisticated as well. The Maranello uses a Bosch Motronic M5.2 ignition/injection system, which is considered by many a state-of-the-art system. Nor is any part of lubrication left to chance. The Maranello is equipped with a racing-inspired dry sump with two recovery pumps and one input pump, double filter, a separate oil tank and dedicated oil-cooling radiator. The six-speed manual gearbox is mounted in the rear of the car, with close ratios through the first five gears and a taller sixth cog for easier cruising.

Despite all this rational goodness, this sound engineering, there will be those who will say the 550 Maranello lacks the presence of the Testarossa. They will claim Ferrari has sold out, building little more than a Euro Corvette with bland, yesterday styling, a bow to marketing, not to Enzo. To that we can only reply, the Ferrari 550 Maranello is a car capable of covering Ferrari's private track at Fiorano in one minute, 34 seconds, which happens to be a full 3.2 seconds faster than the best time ever achieved by a 512 Testarossa. The way we look at it, that should be good enough for anybody.