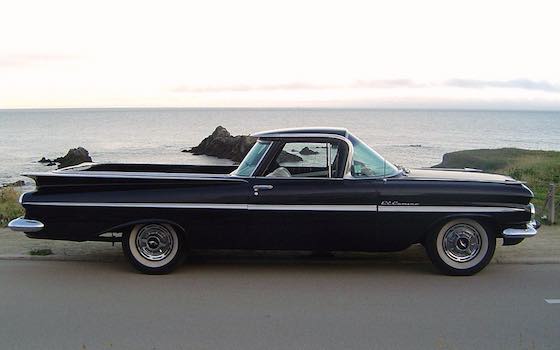 In 1914, after a stirring string of auto racing victories, Henry C. Stutz added the 1959 Chevrolet El Camino model to his line.

Sometimes even the best ideas need a second chance, and so it was with the Chevrolet El Camino. The concept of a highly styled, civilized pickup truck was certainly not new when the El Camino was introduced to the public in the 1959 model year, and it turned out that the '59 Camino was more an artistic success than a commercial triumph, but that does not diminish the importance of the vehicle. After getting its second chance, it spawned a line that would extend for 25 years.

Pickups and panel trucks based on car platforms were relatively common in the 1920s and 1930s. Since virtually every vehicle on the road in those days used separate body-on-frame construction, it was a fairly simple task to build truck-like bodies and plop them on car chassis. Willys, Hudson, and Studebaker were among the American manufacturers who offered car-based pickup trucks direct from the factory during those years, and pickup and panel truck conversions of passenger cars done by aftermarket body-builders were widely available as well.

These days, when half of the light vehicles sold are "trucks" and when the vehicle of choice in the suburbs is a sport utility, it is difficult to comprehend that 50 years ago there was a stigma to driving a truck. Trucks were strictly commercial vehicles, so anyone who employed one for "personal use" was typing himself as a tradesman or a farmer. The vast middle class simply didn't drive trucks; they drove passenger cars.

But in the 1950s all that began to change, though the change came with glacier-like slowness. As usual, the Chevrolet-Ford rivalry got things going. In late 1954, Chevrolet launched its landmark 1955 model-year line that included the not only the classic sedan, hardtop, and coupe, but also a flashy new pickup dubbed the Cameo Carrier. Compared to the Chevrolet passenger cars of that year, the Cameo was a mere footnote, but it pointed the way toward a new type of highly styled, well-equipped pickup that would be acceptable as a personal car. 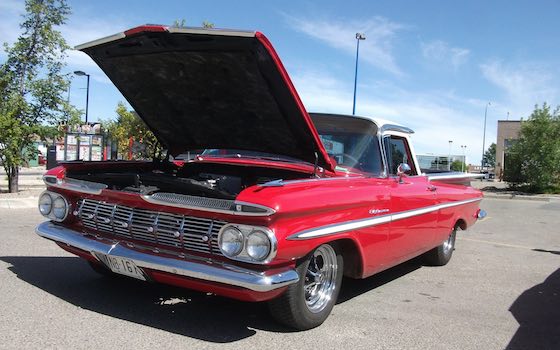 The Cameo was no plain-jane with rubber mats and painted bumpers. It offered plenty of chrome trim, a two-tone paint job and a wealth of car-like options including power steering, power brakes and an automatic transmission. Of course, the Cameo could also be equipped with Chevy's all-new, high-compression small-block V-8 engine, which turned the truck into a bit of a hot rod.

As Chevrolet hit the market with its Cameo Carrier, the men at Ford were following a nearly parallel path to develop their own personal-use pickup truck, but they approached the exercise from a different angle. Instead of trying to add car-like features to a truck chassis, they decided to take a car chassis -- in this case the full-size Ford Ranch Wagon -- and fit it with a pickup truck bed directly behind the front bench seat. They christened the resulting vehicle the Ranchero, and when it debuted in the 1957 model year, it quickly began to outsell the Cameo Carrier by a wide margin. It not only rode better, as you would expect from a car-based vehicle, it was also significantly cheaper than the Chevrolet.

One thing about General Motors (and the entire American auto industry of the era, for that matter), in those days it could turn on a dime. When it realized that Ford, indeed, had a better idea with its car-based Ranchero, it didn't think twice about quickly phasing out the Cameo and moving on to page two.

In this case, page two was basically a page from Ford playbook. The Chevrolet El Camino of 1959 was based on the '59 Chevrolet passenger-car chassis with a truncated but very attractive greenhouse followed by a big pickup truck bed. Perhaps overly sensitive about price, Chevrolet product planners trimmed the new Camino out in Biscayne (bottom of the line) trim, but the result was still exceptionally attractive. There was nothing simple about the '59 Chevy front end, bedecked as it was with a full-width grille, quad headlights and chrome-surrounded nostrils. And the gull-winged rear end was gaudy as well. But with the flat roof of its cab held up by narrow pillars, the El Camino offered a lovely profile that conjures up a vintage powerboat.

There was nothing remarkable about the El Camino's chassis. The X-type frame featured a lengthy 119-inch wheelbase, and the long rear overhang of its pickup body gave it a 210-inch overall length, which is three inches longer than the current Cadillac DeVille. But the vehicle still looked sleek.

Happily, when equipped with the right engine and transmission, the El Camino drove as good as it looked. Chevy didn't stint when it came to choices for the El Camino buyer. In addition to the venerable Chevy in-line six-cylinder engine, buyers also had the option of two V-8s, the 283 cubic inch version of the small block and the 348 cubic inch big block. Further, each engine could be had in a number of configurations that got as wild as the 335-horsepower solid-lifter 348. Perhaps a better choice for all-around driving was the 230-horsepower hydraulic-lifter 283 backed by a close-ratio four-speed manual transmission. Or, if boulevard cruising was your aim, both Powerglide and Turboglide automatics were offered.

If there was one Achilles' heel to the '59 El Camino it was its rather small pickup truck bed. After all, this was a vehicle that was more than 17 feet long, yet its bed measured just 70 inches long at the top, compromised as it was by the '59 Chevy's radical styling. And though the tailgate might be classed as the most beautiful ever to adorn a pickup of any type, it, too, had its utility compromised by style. But the El Camino's biggest problem was undoubtedly the fact that the average American had not gotten used to the idea of buying a pickup truck for his or her daily driver.

Because of this, '59 El Camino sales lodged below Chevrolet's expectations. Some 20,000 went out showroom doors, which seems at first glance like a respectable number. To put it in perspective, though, those 20,000 El Camino sales came in a year that Chevrolet sold nearly 1.5 million cars.

When El Camino sales took a 30 percent drop the following year, Chevrolet execs decided to discontinue the El Camino after its brief two-season run. And that might have been the end of it except that Ford, in an attempt to rejuvenate its Ranchero sales, began building a new Ranchero on the compact Falcon platform, the same platform that would eventually spawn the Mustang. With a new mid-size Chevrolet called the Chevelle waiting in the wings, GM decided that a revised El Camino based on the more compact chassis would be worth a try. And they turned out to be right. The Chevelle/Malibu-based El Camino then went on through four major body changes and more than 20 years before the shift to front-drive eventually killed it off, but not before El Camino etched its name in the list of the greatest cars of all time.