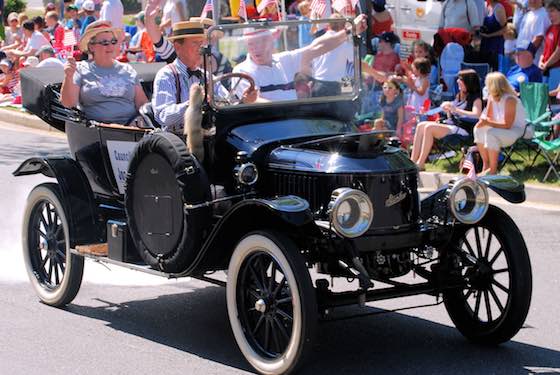 There was a time when many people believed the best way to propel a vehicle on road or rails was the same -- with steam.

If you subscribe to the theory that "simple is better," then, like the Stanley brothers a century ago, you might become a proponent of steam power. After all, when you consider the mechanical gymnastics a gasoline-powered automobile has to go through to operate properly - things like transmissions, clutches, gear-changing mechanisms, etc. - it is a wonder that gasoline cars now rule the roost.

Back in the simpler times before the turn of the previous century, it occurred to many that the way to propel a vehicle over the road was the same way to propel a vehicle on rails - namely steam. When you look at it, steam power offers many advantages. First, virtually anything that will burn can be used as fuel - wood, coal, kerosene, natural gas, whale oil, petroleum - you name it. Second, the design of the actual engine is simplicity itself. Often steam engines have fewer than 25 moving parts. Third, steam power provides nearly instantaneous torque that precludes the need for multi-speed transmissions, gearboxes and/or other driveline components. And finally, steam power has a long track (no pun intended) record of reliability.

None of which was lost on automotive pioneers like the Stanley brothers, Francis E. and Freeland O., or on scores of their contemporaries. It is estimated there were over 100 firms building steam cars in the United States between 1898 and 1905. One report notes that in 1900, when there were just 2000 or so cars in the United States, over half of them were powered by steam. Electric vehicles also outnumbered the cantankerous and hard-to-start gasoline cars at that point in time.

F.E. and F.O. Stanley were identical twins born in Kingsland, Maine, on June 1, 1849. They operated a successful dry-plate photographic business in Massachusetts until the automobile bug bit them in 1896. A steam-powered vehicle built by George Whitney first sparked their interest, and soon after they both encountered a French-designed gasoline auto at a fair in Brockton, Massachusetts. Within months they designed a steam engine destined for their first car that was built for them by the Mason Regulator Company of Milton, Massachusetts.

From there the automotive path led straight up, almost literally. Having sold out their photographic business, they began to build steam cars more as a hobby than as a business, but in 1898 one of their cars won the hill-climbing contest at Charles River Park. The brothers, who had little inclination to wade into the hotly competitive business of automotive manufacture, were deluged with people wanting copies of their car. Since they were entrepreneurs, they couldn't help but take these potential customers up on their offers, and in a twinkling they were in the car business. But, much like Henry Ford at the same time, the Stanleys were more interested in setting speed records than building production cars. In 1898 one of their steamers was timed at the dizzying speed of 27.40 miles per hour.

Less than a year later, the Stanley brothers' cars had gained such a reputation for quality and reliability that the firm was approached by a two customers, A. B. Barber and J. B. Walker, who bought the manufacturing rights to the Stanley Steamer and went into production as The Locomobile Company. On August 31 of that same year, a Stanley Steamer driven by F.O. Stanley with his wife as passenger was the first car to climb Mount Washington, helping solidify the car's reputation. Despite selling the rights to their vehicles, however, the Stanleys decided to stay in the steam car business, much to Locomobile's consternation. Much legal wrangling ensued, some apparently over patents held by the descendants of Eli Whitney, inventor of the cotton gin, and when all the litigation had played itself out both Locomobile and the Stanleys were still in the steam car business.

The Stanleys did change their designs radically, opting to place the engine toward the rear of the vehicle, connected directly to the differential, rather than using the rather crude chain drive they had utilized previously. The shift had the twin benefits of simplicity and better weight balance.

The improved model was equipped with a twin cylinder engine that was both powerful and laden with torque. The fire tube boiler was placed where gasoline cars' engines were being fitted, under the famous "coffin nose." The boiler was heated by a main burner that, in turn, was kept in operation by a pilot burner. Kerosene was pumped to the main burner from a tank with fuel pressure maintained automatically. The pilot burner, which burned gasoline, was fed from a separate pressure tank. The engine was mounted horizontally under the rear deck, and it, the driving gear and differential were all enclosed in an oil-tight and dust-proof case and ran in an oil bath. 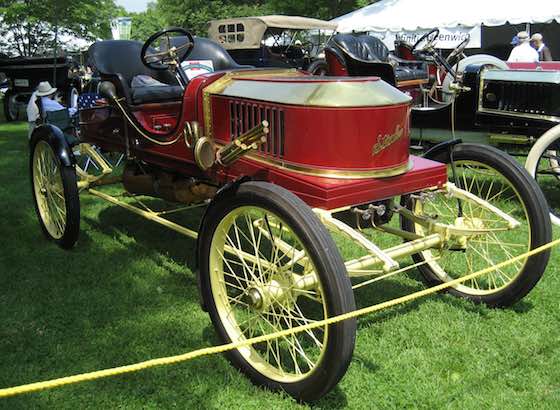 Driving the vehicle was simplicity itself. Once a proper head of steam had been established by lighting and heating the boiler, a handle allowed the driver to adjust the amount of steam sent to the engine, essentially a hand-operated accelerator. Another lever controlled the flow of fuel to the main burner. The car had conventional brakes, and the engine could also be engaged in reverse to help braking or to travel in reverse (in theory) as fast as in forward engagement.

Progress came quickly as the Stanleys used racing (and essentially nothing else) to advertise their improved vehicles. In 1906 racing driver Frank Marriott was timed at 127.66 miles per hour on Daytona Beach with a streamlined Stanley Steamer nicknamed the "Woggle Bug." It was one of the first vehicles ever designed with the help of wind tunnel testing. The following year Marriott had a revised and very twitchy Woggle Bug up to about 150 miles per hour when a gruesome crash destroyed the car and almost cost Marriott his life.

The Stanleys had even better success with their production vehicles. It's said a 1907 model Gentleman's Speedy Roadster was capable of 75 miles per hour. The stone-cold reliability of Stanley Steamers made them a favorite of New England police and fire departments.

But the Stanley Steamers did have two failings. The first was range. While the Gentleman's Speedy Roadster could travel at 75 miles per hour, it couldn't travel more than 50 miles or so on a filling of water. Odd as it may seem, some say the foot and mouth disease epidemic that occurred in the New England area in 1914 was one of the keys to the Staley Steamer's eventual demise, since it hastened the removal of many of the roadside horse troughs that steamer drivers relied on for water. The other failing was start-up time. Often it would take a Stanley Steamer 10 to 15 minutes to build up its steam level before it could be driven, and once the self-starter was designed for the gasoline car that inconvenience became too much. 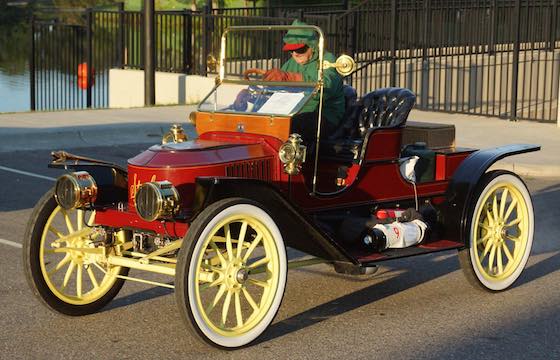 Spurred by the competition from Locomobile, the Stanleys improved their cars, despite the progress of their gasoline-powered rivals. By 1913, Stanleys were electrically lighted to compete with the modern gasoline cars of the day, but, strangely, they retained wooden frames until 1915.

In fact, by 1915 it had become clear to most that the internal combustion gasoline engine was the powerplant of the future and steam a thing of the past. Still F.E. Stanley continued racing his cars over the New England countryside. Sadly, on July 21, 1918, he was fatally injured in a car accident near Ipswich, Massachusetts. Crushed by the death of his twin, F.O. sold the company and turned to the manufacture of violins. The company lasted only two more years. On October 3, 1940, F.O. died at the age of 91 from a heart condition.