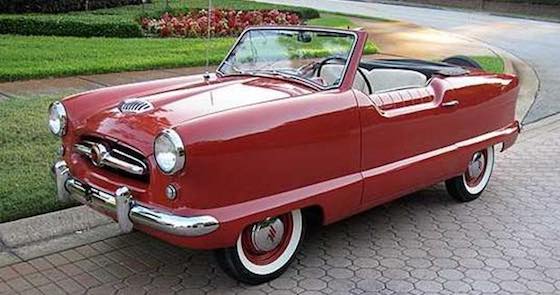 Compared to the American behemoths of its day, the Nash Metropolitan was undersized and underpowered. But this cute compact would be a harbinger of cars to come.

Some cars are macho; some cars are grand; and some cars are utilitarian. But when a car is described as "cute as a bug's ear," which, of course, is the epitome of cute, no other car springs to mind as quickly as the Nash Metropolitan. Though it's not really pretty, not really sleek, and certainly far from racy, the Met seems to have a universal appeal, like peanut butter, backscratching, and Coca-Cola. No, the Metropolitan didn't come from a top-of-the-line manufacturer. No, it doesn't have a proud racing history. And, no, it wasn't built in huge numbers. But the Nash Metropolitan possesses an ageless, cuddly quality that has made it a perennial favorite of car lovers and car agnostics alike.

As is befitting a car that was so different from the American norm, the story behind the Metropolitan is filled with misconceptions, perhaps the biggest of which is the belief in many quarters that the car was a design penned by England's Austin Motor Company and Nash simply applied its name badge to an American version. Since Austin was known for its fine small cars, starting with the legendary Austin 7, there is basis for that deductive reasoning, but the truth of the matter is far different. Instead, the Metropolitan was an American design and the ultimate result of many years of experimentation by the Nash Motor Corporation.

The late 1940s were fertile years for the American car industry. World War II had ended, leaving a gigantic pent-up demand for automobiles, and American factories, unscathed by the devastation of the war, were ready, willing and able to turn them out. Those years spawned a wide variety of new models from the Big Three manufacturers, and it also brought new players like Tucker, Crosley, and Kaiser into the game, trying their luck at making an impact with innovative products. At the same time Nash Motor Corporation, then a part of the Nash-Kelvinator auto-washing machine combine, felt the heat to develop new, innovative products of its own, fearing that it would be left in the dust if it didn't.

Out of this desire to innovate came the NXI and NKI experimental models, which were developed in 1949 and 1950 and then shown to selected audiences across the country. While the bulk of the American car industry was devoted to the "bigger-is-better" philosophy, these prototypes were small cars, designed to provide American buyers with economical transportation. When consumers responded favorably to the idea of a small car, Nash executives went to the unusual step of mailing a questionnaire that featured photos of the prototype, which was largely the work of independent car designer William Flajole, along with a postage-paid envelope to several thousand potential buyers. The result of the survey convinced them that there was a market for a small, economical car, but Nash didn't have the production capacity or the light-car expertise to produce the vehicle in quantity, so its executives looked overseas to the British auto industry, which was taking a good deal longer to recover from World War II than its American counterpart. 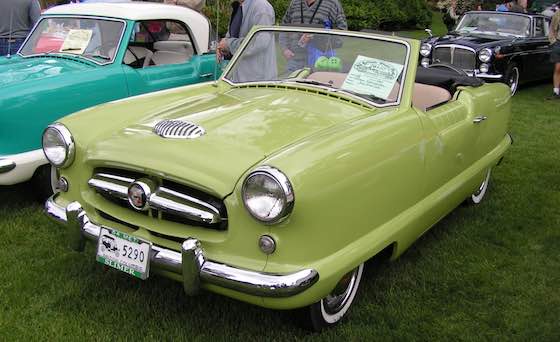 Nash struck a deal with Austin Motor Company, which was at that time was, arguably, the world's foremost producer of small cars, to build what was still being referred to as the Nash NKI for export to America. Nash provided the design for the unitized body structure and suspension components, while Austin provided the tiny 1200cc (73.17 cubic inch) four-cylinder engine. Production began at Austin's Longbridge, England, factory in 1954, and soon the diminutive car began to show up on American roads.

Among other things, you have to give the Nash executives credit for bravery, because the little car, quickly renamed the Metropolitan, was as unlike the typical American car as you could get. While Chevrolets, Fords, and Plymouths of the era were getting steadily bigger and more powerful, the Metropolitan was tiny and anemic.

Here's a comparison for you: the full-size 1955-model-year Chevrolet, another important car launched in 1954, boasted a potent 265 cubic inch high compression V-8; the Met made do with an engine of barely one-quarter the Chevy's displacement. There was certainly nothing wrong with the Austin A-40 engine. In fact, it was a workhorse of the Austin company, powering a succession of good cars over the years. It featured aluminum pistons and a fully counterbalanced crankshaft, but with its tiny Zenith downdraft carburetor and so-so 7.2:1 compression ratio, the overhead valve four cylinder was as reliable as vanilla ice cream and about as exciting.

But that was just what the Nash Metropolitan buyer had in mind. Hey, if you wanted a hot car, you could buy a Chevy V-8, but if you wanted a cute car that wouldn't cost too much to buy or to operate, then plunk your money down on the Nash Metropolitan. Two models were offered, a two-door convertible and a two-door hardtop, and both were so cute you felt compelled to pinch them on the fenders.

Part of the Met's appeal was its small size. The car sported an 85-inch wheelbase and an overall length of less than 150 inches. But even when riding on its standard 13-inch wheels the Met was fairly tall at 54 1/2 inches, which made for an interesting profile, accented by the signature "dip in the door." While hardly beautiful, the Met was as irresistible as a baby kitten, and though it didn't take the market by storm, it did begin to rack up decent sales numbers.

Perhaps the numbers would have been even bigger if Nash-Kelvinator hadn't merged with Hudson almost simultaneous to the Metropolitan's introduction. The combined operation took the name American Motors Corporation, but it still continued to market vehicles under the Nash and Hudson names as it sorted out its future. The Metropolitan was sold by both Nash and Hudson dealers, so there are a few Hudson Metropolitans still cruising the streets.

Though the Met was conceived as economical transportation, it wasn't marketed as a "cheap" car. The suggested retail price for the Model 541 two-door convertible was $1,469, and the suggested list for the Model 542 two-door hardtop was $1,445 -- not all that economical in 1954 terms. But to its credit, the little Metropolitan was filled with standard features. Included among them were dual sun visors, directional signals, map light, dual electric windshield wipers and a "Continental-type" rear-mounted spare tire carrier and cover. The hardtops offered standard two-tone paint, while the convertible mimicked the same look with a second-color convertible top. Of course, most buyers sprung for a couple of the options, like radio, heater, and white sidewall tires.

One thing the Nash Metropolitan wasn't was fast.

If you wanted to grip tightly to the big steering wheel and three-on-the-tree manual shifter to wring the Met through its paces, you would be rewarded with a 0-60 miles per hour acceleration time of nearly 30 seconds. The Met was reasonably light at approximately 1800 pounds, but that weight was squared off against 42 horsepower. 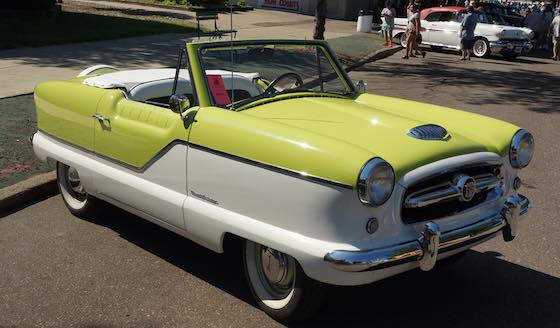 Still, the Metropolitan filled a niche and sold in decent numbers that persuaded American Motors brass to introduce a second version, while they continued to tinker with the Rambler American, which was one of America's first true "compact cars." The revised version of the Met offered a bigger engine and updated, even cuter styling.

The new engine displaced 1500 cc (90 cubic inches) and offered a 24 percent increase in horsepower, all the way up to 52 horsepower thanks to an increased compression ratio (8.31:1). Styling changes included a new hood, mesh grille replacing the "floating bar," and a zig-zag stainless steel side trim strip that separated the two body colors. By 1959, the Met received its last full round of improvements, which included such unheard-of luxuries as a trunk lid, glove box door, seat adjusters, and window vents.

Finally, after the 1962 model year, the AMC Metropolitan finally vanished from new-car showrooms at the conclusion of a nine-year run. During the course of its production, 94,986 Metropolitans were sold, and while not one of them ever set a race course on fire, the Metropolitan's staying power and its never-ending cuteness wins it a place among the Greatest Cars of All Time.

The Nash Metropolitan is a car that was sold, initially, only in the United States and Canada, from 1954--1962.

It conforms to two classes of vehicle: economy car and subcompact car. In today's terminology the Metropolitan is a "subcompact", but this category had not yet come into use when the car was made. At that time, it was variously categorized, for example as a "small automobile" as well as an "economy car".

The Metropolitan was also sold as a Hudson when Nash and Hudson merged in 1954 to form the American Motors Corporation (AMC), and later as a standalone marque during the Rambler years, as well as in the United Kingdom and other markets.