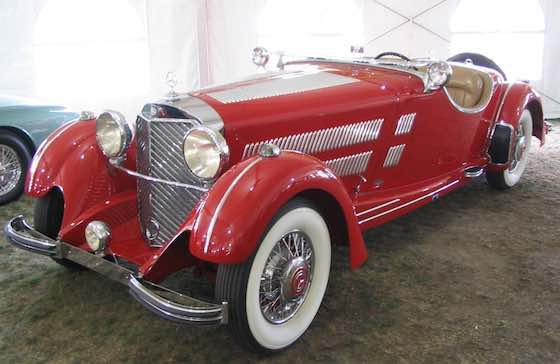 The Mercedes-Benz 500K / 540Ks were among the best-engineered cars of the 1930's, a decade when car designers around the world seemed ready to try anything.

One car has been unfairly associated with a political movement, and a deplorable movement at that: the German National Socialist (Nazi) Party. The Mercedes-Benz 500K came to flower coincidentally with the Nazi assumption of power of Germany. Because of that, and because of the newsreel and movie footage that always seemed to show one Nazi official or another in a grosser Mercedes, the car has become nearly an emblem for oppression. That is very sad, because the Mercedes-Benz 500K and its successor, the 540K, was one of the best-engineered cars of the 1930’s, a decade when the plethora of car designers around the world seemed ready to try anything.

Of course, the deep roots of Mercedes-Benz reach back to the very beginning of the motor car era. Karl Benz and Gottlieb Daimler, working independently a hundred of so miles from one another, developed what are widely regarded as the first automobiles in the very same year, 1886. Each founded an automobile manufacturing company, and each of those companies was widely respected around the world. But it wasn’t until 1926, 40 years after their concurrent invention of the modern automobile, that the Daimler and Benz name would be spoken together.

The cataclysmic merger between the two companies, which occurred in a Germany still attempting to dig its way from under the mountainous burdens of World War I, immediately led to exciting, leading edge machinery. The Mercedes SSKs and SSKLs designed by none other than Ferdinand Porsche, created a legend on the racing circuits. Their brawny supercharged six-cylinder engines produced prodigious amounts of horsepower, and on Grand Prix tracks throughout Europe they were nearly unstoppable.

Then, however, came Black Friday, the stock market crash and a worldwide Depression. Global trade went into a tailspin, and in Germany the newly consolidated Daimler-Benz was not immune to the difficulties. 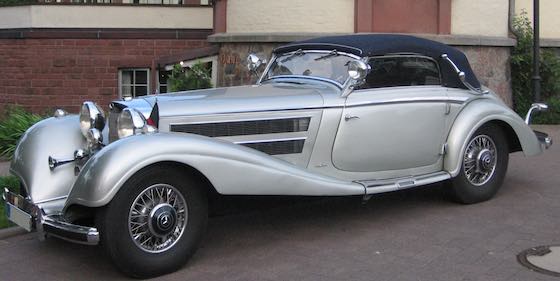 Sadly, the calamity was just the sort of opportunity a former German corporal and political prisoner named Adolph Hitler was waiting for. After the burning of the Reichstag, he came to power in a Germany that was looking for a return to its former greatness and for revenge against the countries that had humiliated it after the Great War.

As political upheaval in Germany ended with the beginning of a dictatorship, Daimler-Benz was trying to emerge from the Depression. Happily for the new combine, the Fuehrer’s plan for the Fatherland was built on rejuvenating its industrial base and, in general, getting things moving again. Germany embarked on a massive road-building campaign, including the beginning of the famous autobahn system.

Far ahead of its time, the German autobahn demanded a car that could make use of its high-speed capabilities. Daimler-Benz, its technology honed by Grand Prix racing, was ready and able to fill the bill.

Porsche had exited Mercedes-Benz in the late Twenties, but his chief engineering spot remained in capable hands. Hans Nibel, who had cut his teeth on Benz Grand Prix racers before World War I erupted, was handpicked to design the Mercedes-Benz series that would culminate in the 500K and 540K.

What he came up with was an automobile on a grand scale. It weighed nearly 5,000 pounds, was powered by an incredibly long straight-eight engine, and had a hood nearly as long as some of today's minicars.

Nibel's original design, labeled the 380 and introduced in 1933, had a 3.8-liter eight cylinder engine, but that didn't provide enough cubic inches to move the mammoth car with the appropriate alacrity. Within a year, the engine had been opened up to 5-liters (305 cubic inches) and a supercharger was installed.

In this incarnation the engine produced 100 horsepower when normally aspirated, still a pitifully small number to face off against 4775 pounds of steel, glass and rubber, but when the supercharger was engaged horsepower screamed up to 160. The sprint from zero to 60 miles per hour with supercharger at full song was actually more like a jog -- it took 16 seconds -- but the German burghers of the day were much more interested in its top speed potential, which was more than 95 miles per hour. The engagement of the supercharger was used to overtake lesser individuals in their Horchs, Adlers and DKWs.

There is no doubt that the engineering of the 500K was top-notch in a take-no-prisoners/spare-no-expense manner. Curiously enough, the mammoth straight eight engine lacked an overhead cam (or two.) It was an overhead-valve design, built for high torque at low engine speeds, and the supercharger substituted for more elaborate valve gear. But everything else about the 500K was ahead of its time.

For example, its brakes weren't just hydraulically activated. (That was becoming commonplace in the Thirties.) They were also power-assisted. The gearbox didn't just offer three forward speeds; it offered four, including a top gear suited to autobahn running. And in the days of beam axles, front and rear, the 500K didn't simply offer an independent front suspension; the rear suspension was independent as well. The trailing-arm type rear suspension used two coils at each wheel as the springing medium.

The epitome of the 500K was the Spezial-Roadster, a car that almost looks like a parody of a classic. The hood is so long and the passenger-luggage compartment is so small that the car may well be one of the most selfish, over-the-top designs ever.

Of course, Nibel's engineering had a lot to do with it. For better front/rear weight distribution the lengthy straight-eight was set well back in the chassis. Simply to house all that machinery, the hood is almost absurdly long, stretching nearly one-half of the car's length. From the right side of the louvered engine cover two large-diameter chrome exhaust pipes emerge, similar to those of the Cord 810.

The car's stylist, Hermann Ahrens, gave the car gracefully swooping fenders that flanked the signature Mercedes grille, and then swept back in a graceful arc to form the running board. The rear fender rises nearly as high as the small decklid, which is crowned with twin spares. One of the prettiest features of the design is the "V" windshield whose steep angle is matched by the angle of the cut of the rear-hinged door.

Sadly, only 29 Spezial-Roadsters were produced. Sadder still is the fact that this impressive example of Thirties engineering is forever linked to an infamous dictator.