There is a lovably oddball character to the British motor industry that is typified by Aston Martin.

While their American cousins quickly built automobiles in mass manufacture, starting with Ransom E. Olds before the turn of the last century, the British seemed perfectly content to approach car building as a cottage industry. Hammer out a few here, put together a few there, and maybe build a little bit of profit into the enterprise. This was the pattern for many British car builders, from Morgan to Jaguar to MG to Triumph to Aston Martin.

The original Aston Martin partners, Robert Bamford and Lionel Martin, completed the first car in 1914, didn't register it with the British government until 1915 and didn't build a second car until 1920. Bamford was an engineer and Martin was a driving enthusiast, and both men competed fairly successfully in hill climbs, including a famous event at Aston Clinton, which would eventually give the marque half its name. After campaigning Singers, Bamford & Martin Ltd, as their leisurely automotive enterprise was called, decided to build its own car to compete with the best of the breed. As Martin described it, what he wanted to build was "a quality car of good performance and appearance, a car for the discerning owner-driver with fast touring in mind."

The first car, called unceremoniously "Coal Scuttle," was built on a modified Isotta-Fraschini chassis and was powered by a 1400cc Coventry Simplex engine hooked up to a four-speed gearbox. The stout engine, multi-speed gearing and lightweight of the design helped it achieve a top speed of about 70 mph and, more to the point, an enviable record in competition. World War I intervened and Bamford & Martin didn't build another car until Bamford retired. The company was then reorganized; Martin assumed control and renamed the company to Aston Martin.

In the 1920's Aston Martin continued in idiosyncratic ways, building a few dual overhead cam four-cylinder racing cars that garnered attention in Britain and on the Continent. One model, dubbed with the manly name of "Bunny," made a 16-and-a-half hour endurance run at Brooklands, setting a world record with an average speed of 76.2 miles per hour.

Despite these successes, though, the company was passed around like a bad cold in the Twenties and Thirties. A.C. Bertelli took over the marque in the middle of the bathtub gin decade, had some racing successes and then passed along ownership to R.G. Sutherland in 1932. More racing wins followed, but as a commercial enterprise Aston Martin's progress was mixed at best.

In 1939 Aston Martin developed a prototype that featured an independent front suspension and a Cotal electric pre-selector gearbox. But World War II intervened and when hostilities ended, Aston instead produced a less sophisticated model as it wallowed near receivership. Then David Brown became the company's most financial savior. Under Brown's leadership an Aston Martin Two-Litre based on the Atom prototype won the Spa 24-Hour Endurance race in 1948, rejuvenating the car's image. Teamed with another David Brown acquisition, Lagonda, Aston Martin gained new life as the Fifties dawned.

With production from the two companies newly consolidated in Newport Pagnell, Buckinghamshire, Aston Martin brass decided to use the 2.6-liter six-cylinder Lagonda engine, which had been designed by the legendary W.O. Bentley, in a revised Two-Litre chassis. The car was dubbed the DB2 and introduced to the public in 1950.

The original DB2 was a pure two-seater sports car, but over the years, as the company chased more volume, it was built as a 2+2 "fixed head" (coupe) version as well. Through the Fifties the DB2 was continually undergoing modifications, tweaks and mild re-styling exercises, becoming the essence of the relatively new Grand Touring (GT) style of automobile, a car with sports car handling and feel but with a closed body. 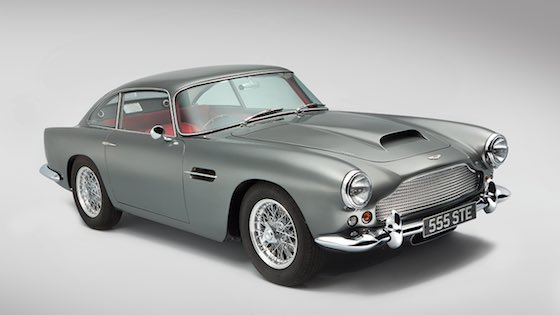 By 1958 Aston Martin showed the world what some would call the best all-around GT car of its era, the DB4. With a hand-made, all-aluminum body designed by Touring of Milan, the coupe was a lesson in classic tailoring. Its front end was dominated by a fender-to-fender grille flanked by two round headlights, and its understated style bespoke of sophistication and what we in the U.S. call "class."

The DB4 was the handiwork of Aston Martin general manager John Wyer, chassis engineer Harold Beach and engine designer Tadek Marek. In keeping with its high-performance profile, the DB4's bodywork was as functional as it was beautiful, built in the "superleggera" manner (Italian for super-light). Fitted on a rigid steel tube frame, the lightweight panels allowed its designers to keep the car's weight at a svelte 2800 pounds.

Hauling around that 2800 pounds was a state-of-the-art in-line six-cylinder engine displacing 3670 cubic centimeters (224 cubic inches). The Marek-designed power plant delivered 263 horsepower at a heady 5700 rpm. Peak torque of 245 pound-feet was achieved at 4000 rpm. Even though the car's upright grille gave it the aerodynamics of a shoebox, it still had a top speed of some 140 miles per hour. The sprint from zero to 60 miles per hour took some 8.5 seconds, not stellar in today's terms, but excellent for a long-legged tourer circa 1959.

As was the norm with Aston Martin, the DB4 underwent constant evolution. Bumpers and grille grew more pronounced. A shorter, lighter GT version of the original car was introduced, and then the chassis was farmed out to Italian design house Zagato for a complete re-skin in an attempt to make the car more competitive on the track. That effort was largely a failure, but the Zagato-bodied DB4 (of which only 19 were built) is considered by many the most desirable of all the DB series.

In 1964, with the substitution of a 4-liter version of the Marek engine, the car became the DB5. Soon that model was made famous as James Bond's personal chariot in the movies "Goldfinger" and "Thunderball." Two years later, the model morphed into the DB6 with a heavily revised Kamm-style rear-end treatment that offered better rear-seat accommodations. Production of six-cylinder Aston Martins ended in 1973, superseded by the V-8-powered cars.

Through it all, Aston Martin has out-lived virtually all of its many owners and prospers today as the ultra-luxury brand owned by Ford Motor Company.

The entirely new car was shown at the London Motor show in 1958, sharing a stand with the DB Mark III which was to continue in production for almost a year. The Aston Martin DB4 was the first production car to capable of 0-100-0 mph in under 30 sec. claiming to reach the 100 mph mark in 21 seconds. A very impressive car that put Aston Martin back in competition with other Mediterranean sports car manufacturers.