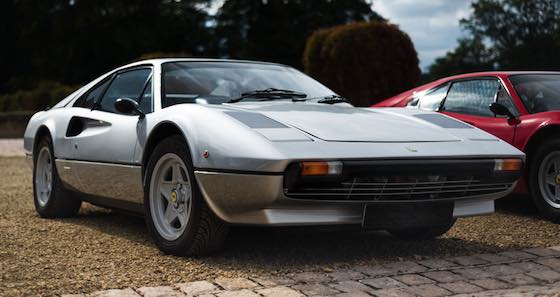 The Ferrari GTB/4 Berlinetta Boxer's big flat-12 engine had a lot to say about the body that wrapped around it. And what a body it was.

If it's a Ferrari, it's equipped with a V-12 engine. By 1969, this had become as commonly accepted a fact as E=mc2 or peanut butter sticks to the roof of your mouth. In fact, the major factor that separated the Dino line of cars from "true" Ferraris was the fact they were not equipped with a V-12. (Instead V-6 powerplants provided motivation for the attractive mid-engine two-seaters.)

As the Seventies dawned Mauro Forghieri, one of Ferrari's most talented engineers, convinced Enzo Ferrari that a horizontally opposed 12-cylinder engine had some advantages over the V-12 for racing. Given the go-ahead, he immediately proved correct, as Ferrari flat-12's were among the most successful racing engines of the 1970s. By the time the decade was done, they had captured four Formula One world driving championships and four world manufacturers' championships.

Of course, the horizontally opposed engine configuration is almost as old as multi-cylinder internal combustion engines. Several engines of this type were produced before the turn of the century, and later both Porsche and Volkswagen became famous for their "flat" engines as did BMW with its motorcycles. Two benefits of the so-called "boxer" design are low center of gravity and inherent, push-me/pull-me balance. In most passenger cars, these advantages were offset by the obvious disadvantage: enormous width, particularly when the cylinders were topped with complex overhead cams.

Ferrari, though, was never much concerned about packaging efficiency, while width and complexity weren't looked at as the drawbacks they might have been had the car been intended for mass production. Certainly, mass production was not a consideration for Ferrari, which built a couple thousands cars a year, but basing its road cars on its successful racing cars was a definite consideration.

So Ferrari eschewed its traditional V-12 for a flat-12 when it came time to design the road car that would replace the 365 GTB/4 Daytona. That vehicle also eschewed the traditional longitudinally mounted front-engine configuration for the mid-engine concept. 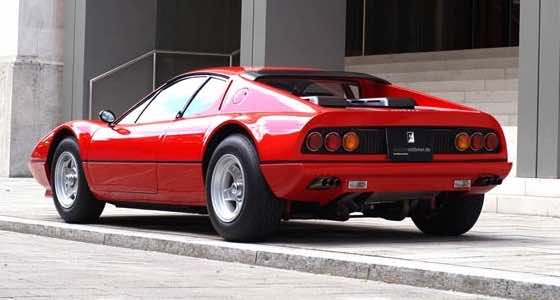 By that time critics were vociferous in their claims that Ferrari was late in developing a mid-engine street car. Lamborghini had debuted its mid-engined Miura in 1966, and many auto journalists immediately accepted it as the most advanced passenger car in the world. Not only did it look fantastic; it also had a very Ferrariesque V-12 engine squirreled away behind driver and passenger. Why, some writers wondered in print, was Ferrari allowing itself to take a back seat to an erstwhile tractor manufacturer?

These queries did not go unheeded at Scuderia Ferrari. Designers, engineers and artisans began hand-crafting a concept car that would eventually be exhibited at the 1971 Turin automobile show. Its wheelbase of 98.4 inches was within fractions of both the Lamborgini and the Corvette Stingray. (Enzo Ferrari showed open disdain for both models, but, always the competitor, he never lost sight of them.)

Fitting the colossal flat-12 engine into the car proved to be an enormous headache, particularly since Ferrari insisted that the vehicle still carry both driver and passenger. (A precursor show car from Pininfarina had placed the driver's seat in the middle of the car in an attempt to gain some packaging efficiencies.) One of the solutions Ferrari engineers arrived at was to mount the engine above the transaxle. At first this seemed like an abomination and a clear affront to the laws of physics, which clearly suggest that a weighty item like an engine be kept somewhat low in a vehicle. But when one considers that a horizontally opposed engine like the Boxer 12 is not nearly as tall as a V-12, the gods of physics were quieted somewhat. Getting the considerable power of the engine to the transaxle was accomplished by a series of gears mounted aft of the engine. The clutch was also mounted aft. Looking forward below the engine were the differential, then the five-speed gearbox, which had a fairly direct linkage to the gated shifter in the passenger cabin. Obviously, a portion of the engine extended behind the rear axle, but the center of gravity was between the front and rear wheels, which was what the designers intended.

The term evolution was a familiar one at Ferrari, so it is not surprising that the 365 GTB/4 BB (the "BB" referring to Berlinetta Boxer) borrowed some of its structure from the Dino. Suspension was double wishbone all around, and the "double" theme was carried through with twin springs at each wheel. Steering was by rack-and-pinion. As with most Ferraris, its frame was constructed of welded steel tubing, while its bodywork was a mish-mash of fiberglass, steel and aluminum.

And what a body! With a knife-edge prow and a roof barely 44 inches off the pavement, the Boxer had the intimidating looks of a drug cartel hitman. The front overhang was exaggeratedly long, while the tail nipped off abruptly behind the rear wheels. The design's tiny vertical rear windscreen was hidden behind graceful sail panels and a visor that would later be knocked off by Toyota. This was the Ferrari solution to the knotty problem of how to house the engine in a mid-engine car. 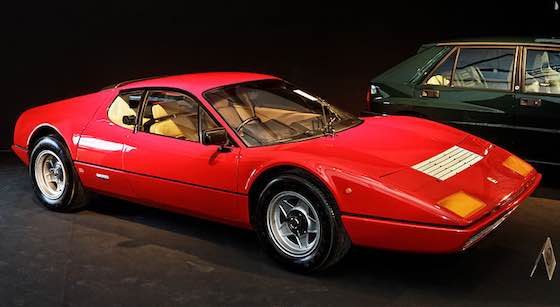 At the center of the car, quite literally, was the "boxer" flat-12 engine. Aside from the horizontally opposed configuration, there was nothing remarkable about the engine. It simply offered the expected: belt-driven dual overhead camshafts, Weber carburetion, and it used the same pistons and connecting rods as did the V-12 Daytona engine. At 4.4 liters, its displacement was almost identical to the engine in its predecessor as well, and horsepower was up just slightly, from 352 to 360. Both peak horsepower and peak torque occurred lower in the rev-band, however, making the Boxer a more driveable machine.

It was also a machine with riveting performance potential. Road testers reported zero to 60 mph sprints in as little as 5.3 seconds and claimed top speeds of more than 175 miles per hour. While at the absolute limit the Boxer could be a handful, it had enough designed-in understeer to keep the ham-handed and inattentive from crashing rear end first into roadside obstructions. Though it had minimal luggage capacity - about enough for a bathing suit and a toothbrush - it was capable of long distance touring without beating up driver and passenger.

When it came time to revamp the 365 GTB/4 BB in 1977, it wasn't performance but comfort that got more attention. Displacement was brought up to nearly 5-liters (301 cubic inches) through judicious boring and stroking, and the compression ratio was bumped up a bit, but more onerous exhaust emissions and noise standards ate up most of the potential power gains. Ferrari again listed the peak horsepower at 360, though the peak occurred yet lower on the tach. Dubbed the 512 BB, the revised car was somewhat easier to drive and live with, while producing very similar acceleration and top speed numbers.

Any way you look at it, the Boxer carried the prancing horse of Ferrari into uncharted territory, and before it went out of production, it became in the public's eye the essence of Ferrari.

The Ferrari Boxer Was the Coolest Ferrari