Eventuallly reality overwhelmed the Chevrolet Chevelle SS 454, but for several shining moments the car demonstrated how hot a factory-built hot rod could be.

In this case the fantasy was having a National Hot Rod Association Pro Stocker nearly straight out of the box from your local Chevy dealer. The reality was tightening exhaust emission controls, consumer concern for fuel economy, and the costliness of small production runs. In the end, reality overwhelmed the SS 454, but for several shining moments the car demonstrated how hot a factory-built hot rod could be.

We have outlined the history of the Chevrolet Chevelle in a previous piece (see Chevrolet Chevelle SS 396), but for the sake of clarity and historical accuracy, let's run through it quickly here. The "mid-sized" Chevelle sprang full-grown from GM's A-body platform that also supported the Oldsmobile F-85, Pontiac Tempest and Buick Special. It hit the market at the beginning of the 1964 model year.

The original F-85, Tempest, and Special all had their share of idiosyncratic features, but in their second incarnation, all the weirdness was engineered out of them. Instead, they became "ordinary American cars," so generic in engineering and construction that each could well have worn a blue stripe. With this as its underpinning, there was nothing leading-edge about the Chevelle either, but while some might have held that against the vehicle, to others it was a blessing. If you knew anything about cars, you could work on a Chevelle. 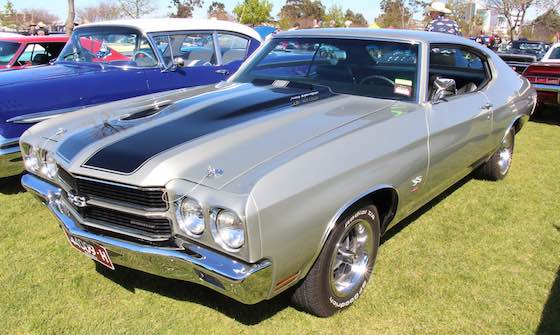 Slotted between the Chevy II and the full-size Chevrolet line, it rode on a 115-inch wheelbase. Front engine, rear drive of course, the Chevelle's suspension was also pretty simple -- an independent A-arm front and a live axle in the rear. In its original form, the car had few performance aspirations. Instead, it was a super-reliable family car, capable of hauling six passengers on its two bench seats and a decent amount of luggage.

Its original "Super Sport" version was more style than substance. The 220-horsepower 283 V-8 engine was part of a package that offered tachometer, front bucket seats, available Positraction limited-slip differential, sintered-metallic brake linings (for the mundane drum brakes), and a four-speed manual transmission. As the model year progressed, the Chevelle engine choices expanded to include two 327 cubic inch V-8's with horsepower ratings of 250 and 300. But the car was no threat to a big-block-equipped Pontiac GTO.

With the success of the GTO, General Motors began to lighten up its corporate policy that had restricted the use of so-called big-block engines in intermediate-sized cars. The fear was that too much horsepower might result in rampant mayhem -- plus big insurance premiums. Chevy's first crack at the GTO was the 1965 Z16 Chevelle, a low-volume nearly secret option that included the 396-cubic-inch V-8 engine offering some 375 (gross) horsepower. That car led directly to the Super Sports 396 of 1966, a vehicle that also featured a sleeker exterior.

The lowest level SS 396 offered a 325-horsepower version of the 396 cubic inch V-8, and the up-level "street" version with the L34 hydraulic-lifter-equipped engine put out 360 horsepower. And if you wanted to pretend you were a race driver, you could pony up the extra bucks for the 375-horsepower solid-lifter version, though few went to that extreme. With a sub-15-second quarter mile time from the L34 there was really no reason to opt for the high-maintenance solid-lifter version.

The SS 396 proved to be a big hit in the marketplace. It was a practical family car (albeit one that offered dismal fuel economy) that could also win most stoplight derbies. Its cornering ability was never on par with its straight-line ability, but if you like the feel of power and torque (and who doesn't?) the SS 396 had it in spades.

By the time the 1968 model year rolled around, the SS 396 was solidly successful, so GM was willing to invest yet more money in the sub-model. In fact, GM engineers decided to build two different chassis for the '68 Chevelle. The mundane four-door sedans rode on a 116-inch wheelbase, while the coupes, including the SS 396, got a tauter 112-inch wheelbase. This didn't turn the Chevelle into a Ferrari, but the shorter wheelbase, along with other tweaks like the addition of sway bars and inclined front control arms, helped upgrade the previous model's handling. 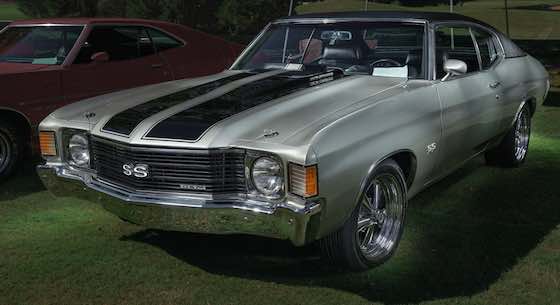 By 1970, the Chevelle was equipped with an even bigger big-block. The same basic block was bored and stroked to achieve a displacement of 454 cubic inches, and the model designation shifted to SS 454 for the sake of symmetry. Each cylinder bore in the monster motor was nearly the equivalent of a quart-sized tomato juice can. Big and fuel-thirsty but who cared?

While the 396 cubic inch engine remained in the lineup, two versions of the 454 trumped that solid performer. Semi-rational human beings opted for the LS-5 version of the 454. With hydraulic lifters and a potent 10.25:1 compression ratio, this version was said to be good for 365 (gross) horsepower. Arguably, this SS 454 was the most streetable all-around performer of the SS series.

Pure racing types took things one step further. They ordered the LS-6 454 featuring solid valve lifters and a shocking 11:1 compression ratio. GM claimed the engine developed 450 gross horsepower. Straight-line times for the LS-6 SS 454 were truly stellar. Various magazines claimed zero-to-60 miles per hour clockings as low as the mid-five second range. Road testers saw quarter mile times of less than 14 seconds, this from a car that could be bought off the showroom floor. Fantasy come to life!

But by 1970, fantasy was plummeting headlong into reality. The SS 454's days were numbered. First, for the '71 model year General Motors decided that all of its products should be tuned to run on unleaded fuel. The lower octane of the unleaded gas led to the emasculation of the two 454 engines. The LS-5 was de-tuned to a 8.5:1 compression ratio, and, though GM still claimed 365 horsepower for the beast, it is doubtful the engine actually offered that much. The LS-6 version dropped to a 9:1 compression ratio and 425 horsepower, and further it seems unlikely that any 1971 LS-6-equipped cars were actually delivered to non-racing customers. The car still looked good, and with the LS-5 street engine it performed well, but the end was rapidly drawing near.

By 1972, with reality closing in, the SS 454 was on its last legs. The LS-5 engine was still available, but GM decided to switch to SAE net horsepower ratings in '72 versus the gross horsepower ratings used previously, so the emission-choked car looked even more anemic with its 270 claimed horsepower. In reality the engine was not much different from the previous year, but the switch reflected the insurance companies' new sway with automakers. The '73 SS 454, with an all-new body style, boasted just 245 horsepower, and the following year the SS option package vanished from the scene as the first oil crisis changed everything about the auto industry in a matter of a few dreadful months.

A Brief history of the most desired and powerful Chevelle