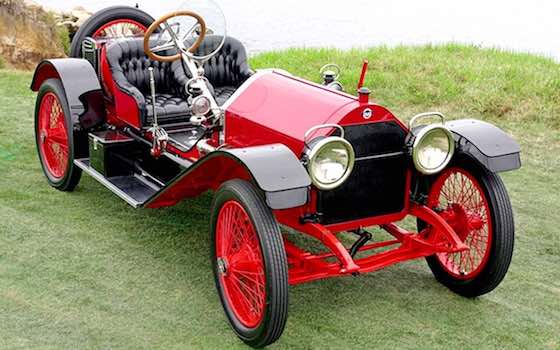 In 1914, after a stirring string of auto racing victories, Henry C. Stutz added the Stutz Bearcat model to his line.

If a typical American trait is confidence, then Harry C. Stutz was as American as apple pie or baseball. A more confident car man you are never likely to find, and, to his everlasting credit, Stutz always backed up his confidence in himself with high quality work.

Born on a farm near Dayton, Ohio, on September 12, 1876, Stutz was only able to obtain a grade-school education before he entered the work force, getting a job at the Davis Sewing Machine Company and then moving on to the National Cash Register Company. Despite the long hours, Stutz wasn't the type to sit still. At night he took classes in mechanical engineering, and by 1897 he had designed and built his first car, a contraption nicknamed "Old Hickory" because it was built from scrounged parts and a discarded hardwood buggy.

When Stutz moved from Ohio to Indianapolis, he immediately looked for a job in the budding automobile industry and found one at the Lindsay Russell Axle Company. Soon he moved on to the J. & G. Tire Company and then to the Schebler Carburetor Company. As his career developed, these apprenticeships gave him a thorough knowledge of automotive components that none could match.

In 1905 Stutz got his first opportunity to design a production car, and he didn't waste it. The vehicle he produced -- the American Underslung -- was one of the most significant, if unsung, automobiles of this century's first decade.

Not one to stick lamely with convention, Stutz turned chassis design on its ear with his car. Instead of having his chassis perched unsteadily on springs above the axles, Stutz hung his chassis from the axles. As Stutz himself pointed out, "Recoils [from sudden stops, for instance] are upward instead of downward, because the springs operate under tension instead of compression." Handling was aided, as well, by the vehicle's uncommonly low center of gravity. 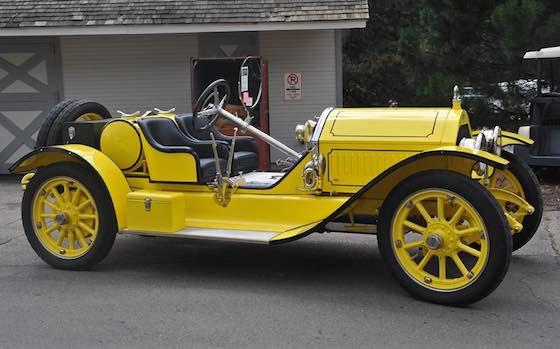 The underslung principle also facilitated the use of large-diameter tires, a boon to both handling and tire life in an era when punctures and blow-outs were as common as Saturday night baths. The American Underslung was fitted with 40-inch wheels, a size that would have made the car impossibly top-heavy had the car used a conventional chassis.

Its transmission was nearly as groundbreaking as its chassis design. Using chrome vanadium steel, Stutz conceived a four-speed gearbox in which the shafts rotated on ball bearings. Another advantage of the unusual layout was the almost horizontal driveshaft that extended from the gearbox to rear differential. According to Stutz, the typical angled driveshaft of the era cost its vehicle five to 15 percent of its power. In the American Underslung, driveline losses cost it very little of its 25-horsepower.

Stutz's creation also offered other unique features. It used exceptionally long leaf springs 36 inches long in the front and 47 in the rear to minimize ride choppiness that might have been the natural consequence of its relatively short 102-inch wheelbase.

Stutz was so concerned with proper lubrication that he designed a crankcase that carried eight quarts of oil, instead of the typical four, and he mounted an auxiliary oil tank integrally with the gas tank, poised behind the rear seat.

The American Underslung had a racy two-seat body (with mother-in-law seat perched uncomfortably at the rear.) Covered in buffed leather, the twin bucket seats were stuffed with what sales literature called "genuine curled hair." At $1,250 the American Underslung was a relative bargain and a qualified success, but Stutz didn't stick around long enough to pay much attention. With the Underslung design as his portfolio, he moved on to the Marion Motor Car Company, a stomping grounds of one Fred Duesenberg. His work at Marion was less high-profile than his breakthrough efforts at American, and part of the reason: he was preparing to launch a car that would bear his own name. Because of this, he put in his time at Marion, but every spare minute was spent getting ready for the joyous day when he would leave.

By 1910 his back room effort had moved from the design to the prototype stage. He was pleased with the results, but he knew to be a success his car had to break through into the public consciousness or it would get lost amidst the dozens of makes that were already on the market. As his ticket to the big-time, Stutz chose a rather daunting challenge -- an entry in the inaugural Indianapolis 500.

Certainly the Indianapolis 500 was not then what it is today - the biggest event in motor racing. But the initial event was expected to draw a rich international field of entrants, so Stutz's decision to field an entry was an expression of self-confidence bordering on braggadocio. 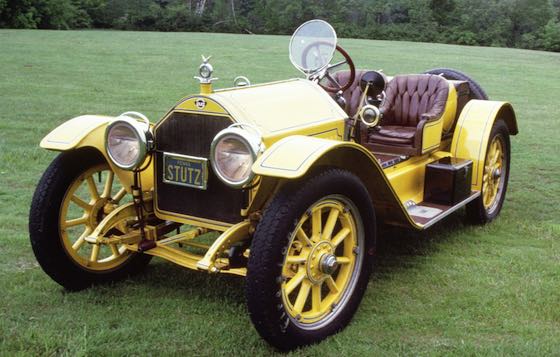 Fortunately, the racing car Stutz developed had the goods to be successful. It was powered by a 390 cubic inch in-line four-cylinder engine, which seems monstrous by today's standards but was actually modest in size compared to much of the competition. The cylinders were cast in pairs, and they were topped by a T-head design with intake valves on one side of the cylinders and exhaust valves on the other. Stutz specified dual ignition to guard against misfires, and he had galleries drilled into the hefty crankshaft to carry oil to the bearings. This was a car that was ready to race for 500 miles.

One May 30, 1911, with Gil Anderson at the wheel, that is just what it did. No, it didn't win the race. Ray Harroun took home the victory in a Marmon, and Anderson's Stutz finished eleventh. But for a multitude of tire-related pit stops, however, the car would have finished much higher on the list. As it was, the eleventh place finish was deemed impressive, especially since almost half of the 40-car field dropped out before the nearly seven-hour race was over.

With Indianapolis conquered, at least after a fashion, Stutz put into play the next phase of his plan. He announced that the Indianapolis-based Ideal Car Company would soon market a passenger car version of his successful racer in three body styles: four-passenger, five-passenger touring car and roadster. The roadster, of course, would soon evolve into the Bearcat, and, alluding to the Indianapolis 500, Stutz referred to it in his advertising as "The Car that Made Good in a Day."

With a wheelbase of 120 inches, the two bucket seats perched between the front and rear axles almost seemed lonely. Certainly there wasn't much bodywork to keep them company, just a minimal hood and jaunty fenders. The wheels were 34 inches in diameter and carried tires that were 4.

Bruce McCaw tells us about his 1914 Stutz Series E Bearcat at the Pebble Beach Concours d'Elegance.