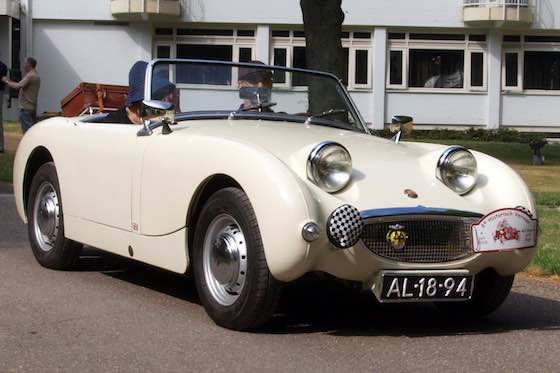 The 'bug-eye' wasn't the greatest car that Donald Healey built, but because of the Austin-Healey Sprite's low price and high cuteness quotient, it had the most universal appeal.

You could say that the car was as cute as a bug's ear, but its bug-eyes gave it the indelible image that has stayed with us for nearly 50 years. The Austin-Healey Sprite wasn't the first car that Donald Mitchell Healey built, nor was it the best, but, due to its stunningly affordable price and its so-cute-you-want-to-cuddle-it visage, the Sprite is the Healey car that has the most universal appeal.

Healey's saga was already moving into its third act when the Sprite was introduced in 1958. DMH, as he liked to be called, was born in 1898 in Perranporth, Cornwall, the son of a shopkeeper who eventually became a land developer. Like Henry Royce and Herbert Austin before him, the young Healey became enamored of tools, machinery and the most infant industry of the day, aviation. He left school to join Sopwith and within months, the outbreak of World War I prompted Healey to enlist in the Royal Flying Corps. Quickly, he shifted from mechanic to aviator, but his brief flying career ended when he crashed in 1916. Mustered out of the service soon after, he returned home to Cornwall where he involved himself in two other fledgling industries: radio and automobiles.

After designing a successful radio receiver, his interest in automobiles won out, and with his father's help he opened a garage. By the mid-Twenties his prospering business interests allowed him to indulge in racing, and he soon began to make a name for himself in the sport. His success in trials and rallies earned him a drive in the 1929 Monte Carlo Rally, piloting a Triumph Super Seven saloon. His first attempt in the prestigious rally was forgettable, but the following year a seventh-place finish in the event won him a factory ride in an Invicta. Driving that car, he won the 1931 Monte Carlo Rally despite a mechanical problem that cost him all the braking in one wheel.

After a short stint at the wheel of a Riley Brooklands in the Alpine Rally, he joined Triumph Motor Company as Experimental Manager, which placed him in charge of Triumph's rallying program. While at Triumph he paid Alfa Romeo the ultimate compliment by literally copying the marque's Monza engine, and the copy was installed in a stunning two-seater called the Dolomite. Unfortunately, Healy's Dolomite, one of just three built, was struck by a train in the 1934 Monte Carlo Rally. 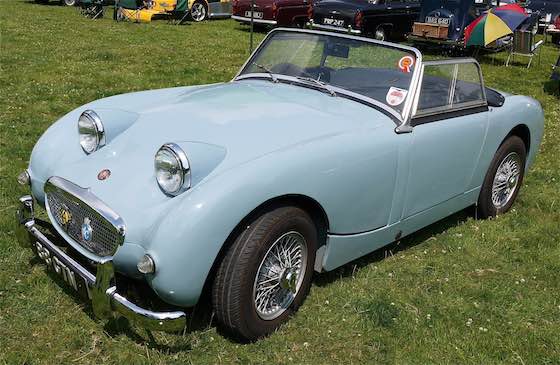 The Second World War was as jolting to Healey as the first had been. Triumph went into receivership, and he bounced to Humber, all the while nursing the idea that at the war's end he would finally manufacture his own car that would have all the best attributes of the finest sporting models of the day. When VE and then VJ day arrived, Healey set his plan in motion, wheedling a small supply of 2.4-liter four-cylinder engines from Riley.

The little engine was a gem, producing 100 horsepower, and Healey teamed it with an advanced chassis featuring a trailing link suspension. In British fashion, he left the body design and construction to outside firms, so the relative handful that were built at the time (1946-8) have rather unique looks.

Late in 1949 Healey struck a deal with the staid Nash-Kelvinator Corporation, but not to build sporty refrigerators. Instead, it was Healey's plan to manufacture sports cars using the Nash 3.8-liter six-cylinder engine. The Nash-Healey was destined strictly for America, and meanwhile, Healey cooked up another batch of automotive stew after signing a secret deal with Austin's Leonard Lord to purchase the marque's stolid A90 2.6-liter four-cylinder engine. Healey's idea was to fill the game between the aging, underpowered MG-TC and the modern but expensive Jaguar XK, and the result was Healey's Mona Lisa, the Healey Hundred.

The car was an immediate sensation.

So sensational, in fact that, Lord offered to take over production of the vehicle from the tiny Healey works. For a royalty on each car, Healey accepted the deal, which guaranteed much higher production than Healey's manufacturing operations could ever have contemplated. The Austin-Healey 100 led to a 16-year collaboration between Austin and its successor companies and Healey, and before the Fifties were over the collaboration begat the Sprite.

Like the 100, the Sprite was designed to fill a market niche, in this case the hole in the market for cheap, rudimentary sports cars that had been filled by Austin 7 variants prior to the war. To keep it cheap, the primary goal, Healey specified as many stock Austin parts as possible, most of them coming from the A35. Power (if you could call it that) was furnished by a tiny four-cylinder engine with displacement of less than one liter (948 cubic centimeters, to be exact.) With just 43 horsepower on tap, the Sprite wasn't all that sprightly, even given that its curb weight was a svelte 1,500 pounds. Acceleration from zero to 60 miles per hour took nearly 21 seconds, but the little car was so much fun to throw around that most forgave its power shortcomings. 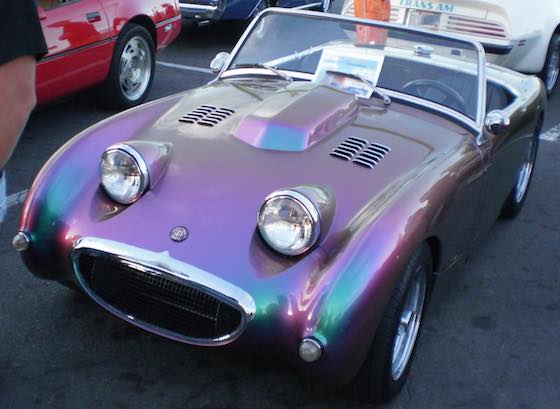 The Sprite's styling benefited from happy accident. The upright headlights that gave the car its "bug-eye" nickname ("frogeye" in the UK) came about because Austin decided to forgo the installation of a mechanism for hiding them under the hoodline during daylight hours. Feeling that such a system would be too expensive and complicated, the powers at Austin just left the headlights to jut into the breeze, giving the car its unique "face." As another cost-saving move, Austin corporate moguls also contemplated using identical front and rear body panels, but by the time production arrived that idea had been put to rest, though the front and rear lines are remarkably similar. Gerry Coker and Les Ireland share credit for the design.

Examples of cost-cutting were everywhere in the car. The Sprite Mark I lacked an exterior trunk opening (something it shared with several generations of the Chevrolet Corvette), exterior door handles and a folding convertible top. A true roadster, the Sprite was fitted with side curtains instead of roll-up windows so to open the door you merely slipped your hand inside and used the interior handle. Because it was exposed to the elements, the car's interior wasn't carpeted either. Instead, the floorboards were covered with ribbed rubber mats. Options included heater, tonneau cover, factory hardtop and even the front bumper.

When introduced in 1958, the little car was a hit, based largely on its fun-to-price ratio. The original Sprite had a suggested retail of $1,795 at the east coast port of entry, and it sold for less than 700 pounds in the UK. Over the course of its three-year product run more than 49,500 Sprites were built. In 1961 the Bug-eye Sprite was supplanted by an all-new version that was accompanied by a closely related variant called the MG Midget. This was the beginning of more than a decade of "Spridgets," but it was Healey's original Sprite that led the way.