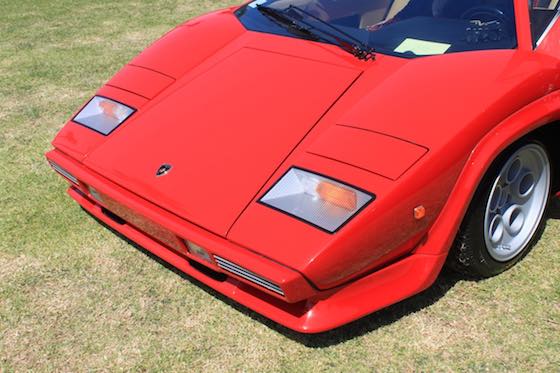 With these undercurrents buzzing around the Sant' Agata Lamborghini works, Paolo Stanzani stepped to the drawing board to design the car that would become the Miura's replacement, the Countach. At the time one would be hardpressed to think of a better man for the assignment. Not only had Stanzani been a key player in the development of all of Lamborghini's previous motor cars.

Speaking about adversity, they say whatever doesn't kill you makes you stronger.

In the late Sixties, Ferruccio Lamborghini was enduring a string of adversity, despite the fact that his Lamborghini Miura was the darling of the automotive press. Though once honored by Italy's president as a "Knight of Labor," a title that brought with slightly more esteem than being named a "Kentucky Colonel," his manufacturing plants were plagued by long and ruinous strikes. Communist agitation was everywhere, and the streets were often stained by the chianti red of rioters' blood.

Closer to home, the Lamborghini Miura seemed a victim of its own success, like a precocious child that can't quite adjust to adulthood. It was a car that was rushed into production before it could be properly sorted out, and, thus, the first round of buyers became loud, complaining "development drivers," a job they certainly did not want to pay for. In addition to the typical exoticar teething problems, the Lamborghini Miura had four very definite shortcomings:

The first was its backbone or, rather, it's lack thereof. Chief engineer Giampaolo Dallara designed the Lamborghini Miura's monocoque tub out of welded-up sheet steel. It seemed an excellent way to save weight, but, in practice, the chassis flexed much more than was desirable. When combined with corrosion over the years, a Lamborghini Miura chassis could actually fall apart during a hard maneuver.

Hard maneuvers could also cause the oil to slosh in the pan to the point the oil pickup would suck air. This had a devastatingly deleterious effect on the V-12's main bearings, and, of course, pulling the transverse engine from a Lamborghini Miura had about as much appeal as pulling one's own teeth without Novocain.

Another shortcoming was the relationship of the Lamborghini Miura's rear suspension geometry to its decidedly aft weight bias. (Some 58 percent of the vehicle's 2800-pound weight rested on its rear tires.) Early Lamborghini Miuras were known to transition in a flash from benign understeer to rapid oversteer, a trait that left many wealthy Lamborghini Miura owners white-knuckled and, perhaps, one or two of them dead. 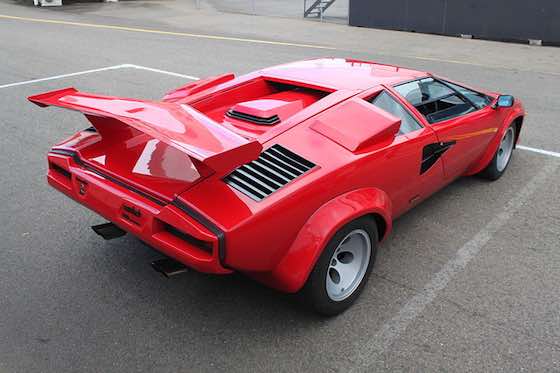 The final shortcoming was front-end lift, a factor that seems the bane of the "pretty" car. The Lamborghini Miura's attractively curved nose proved to be an effective airfoil, lifting the front wheels at speed, again a disconcerting habit to Lamborghini Miura purchasers.

With these undercurrents buzzing around the Sant' Agata Lamborghini works, Paolo Stanzani stepped to the drawing board to design the car that would become the Lamborghini Miura's replacement, the Countach. At the time one would be hardpressed to think of a better man for the assignment. Not only had Stanzani been a key player in the development of all of Lamborghini's previous motor cars, he was also the head of production for the company. He knew firsthand the manufacturing headaches the Lamborghini Miura design had brought onto his enthusiastic team of artisans.

Though Dallara had reinvented the sports GT car with his groundbreaking mid-engine design, Stanzani didn't blindly follow the obvious lead. In fact, he proceeded to reinvent the sports GT yet again, because, except for the midships-mounted V-12, his Countach was vastly different from the Lamborghini Miura.

The Lamborghini Miura had been hailed for the innovation of its transverse-mounted V-12, something akin to a Mini Cooper set-up on a far grander scale. Stanzani understood the packaging efficiencies of the transverse mount, but he also had experienced the tortuous shift mechanism and the cockpit heat problem inherent in having six cylinders a few inches from the seatbacks.

For the Countach, he mounted the engine longitudinally (as had the mid-Sixties Ford GT40, among others), but rather than having the power takeoff exiting the rear of the engine with a short run to a transaxle, he specified the power takeoff be in front of the engine, right to the gearbox, which sat about even with the driver's right thigh. This enabled a shift linkage as direct as in a conventional front-engine, rear-drive automobile. 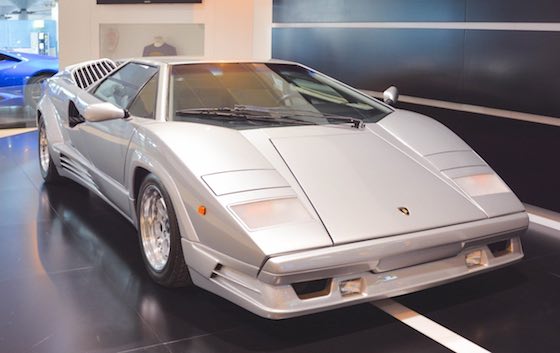 Unfortunately for simplicity, this was about the only direct aspect of Stanzani's design. To reach the rear-mounted differential, power was routed through a gearset to a driveshaft that ran through a tunnel in the oil sump, not exactly conventional or easy to build.

Lamborghini originally planned to offer the Countach with a 5-liter bored-and-stroked version of its Bizzarrini-designed V-12, and because of that it was unveiled at the 1971 Geneva auto show as the LP500. When it came to series production, however, the car's were powered by the reliable 3.9-liter version and the nomenclature was changed to the LP400. In its initial Countach form, the V-12 delivered 375 horsepower, down 10 from the Lamborghini MiuraSV configuration.

For the body design of the new car, Lamborghini tapped a familiar face: Marcello Gandini, who with some help from a very young Giorgetto Giugiaro, had drawn up the Lamborghini Miura. Like Stanzani, Gandini went a vastly different direction with the new car. Instead of the Lamborghini Miura's sensuous curves, the original Countach had edges to it, as if it were an oragami sculpture. Its most distinctive feature were the gas-strut-assisted swing-up doors. Those familiar with the current Countach would barely recognize the original, because it lacked the fender flares, cooling scoops and rear wing that made the car an Eighties icon.

What the design didn't lack was presence, and as it evolved toward production in 1972, the signature air scoops and low, anteater nose made it look futuristic. In fact, the car still looks futuristic more than 25 years after it was designed.

After tweaks to the original removed its tendency to lift its nose, the Gandini design was far better for high-speed touring than was the Lamborghini Miura's. Where the Lamborghini Miura would get twitchy during hard acceleration or braking, the Countach proved much more stable, which was important since, even in its earliest form, the car had honest 180 miles per hour capabilities. (In good trim a Countach could jet from zero to 60 miles per hour in about 5.5 seconds.)

Unfortunately, just as the Countach program was reaching fruition, Ferruccio Lamborghini's troubles grew so bad that he sold controlling interest in his car company to a couple of Swiss businessmen. Though lacking the driving vision of its founder, the company continued to refine the raging bull.

An S version was introduced in 1978, and in 1982 the car received the 5-liter V-12 that it was originally designed to accept in the early 1970's. Finally, still showing a great deal of life, its engine was redesigned yet again, receiving four-valve heads on a bored-and-stroked 5.2-liter block. This Quattrovalvole proved to be the most potent Countach of them all, with 455 horsepower and more torque than a bulldozer.

It was a car in which the driver never looked back. Why bother? If he was doing his job, nobody was ever gaining on him. 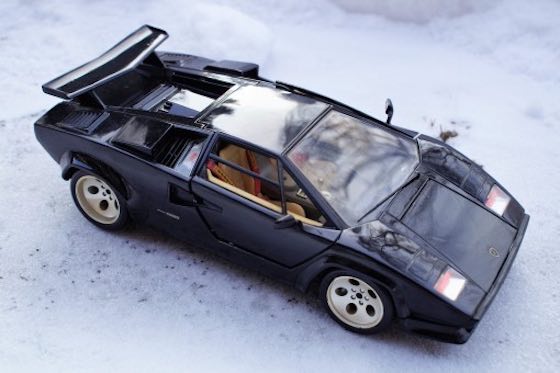 1986 Lamborghini Countach. An Italian exclamation of astonishment! The hottest supercar of the 1980s.