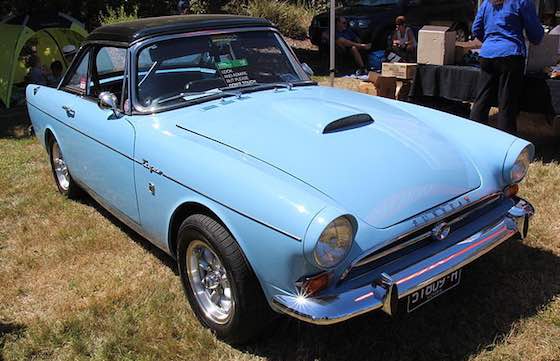 With the help of Carroll Shelby, the pint-size 1964 - 1967 Sunbeam Tiger Roadster became special -- and pretty quick -- after a V-8 was shoehorned into it.

Nobody ever accused Maxwell Smart (aka Agent 86) of being the brightest gemstone in the jewelry box, but there is one thing you can say for him, he knew how to pick a car. When he cruised up to the clandestine offices of Control each week to get his newest assignment, the Sunbeam Tiger he left at the curb drew knowing smiles from teenage car freaks in the television audience (including one Jack R. Nerad of LaGrange, Illinois.)

There were plenty of flashier, more exotic cars the Don Adams character could have driven in the Mel Brooks-Buck Henry-created series "Get Smart," but the Sunbeam Tiger was the perfect choice. It had British and American roots (or should we say Rootes?); it was palpably understated and cool, and, like Maxwell Smart himself, it was frequently underrated and a bit obscure.

Also like the Maxwell Smart character -- part James Bond, part Barney Fife -- the Sunbeam Tiger was a pastiche. In the solid, stolid chassis of the Sunbeam Alpine sports car it featured the heart of a falcon, in this case the Ford Falcon.

The idea for this assemblage of big American engine in small European car was certainly not an original one. In the post World War II era alone, automotive history is littered with such projects: Allard, Nash-Healey, Facel Vega, Iso. Of course, the most famous and most copied of these is the Shelby Cobra, the result of installing a Ford V-8 into an AC Ace.

In the early 1960's the Sunbeam Alpine presented a very similar opportunity. Debuting in 1959, the Alpine was a civilized two-seat British sportster, a pride of the Rootes Group. Somewhat more luxurious than the typical British sports car of the era, the Alpine boasted roll-up windows, a folding soft top that actually fit, and even an optional hardtop. Fitted with tailfins reminiscent of a late-50's Dodge, it was also a handsome car and, by English standards, very well screwed together. Where it came up lacking, as the Fifties matured into the Sixties, was in the engine bay. The 1494 cubic centimeter displacement four cylinder engine just didn't produce enough horsepower, so even with its electronic overdrive-four-speed transmission the Alpine had a hard time tasting 100 miles per hour. 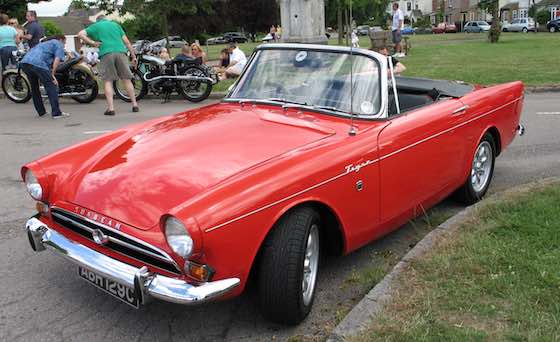 This led to a great deal of frustration in one Ian Garrad, U.S. West Coast honcho for Sunbeam and its parent Rootes Group. His frustration built as he watched what he believed to be the technically inferior AC Ace turn into a world-beater by the quick infusion of American V-8 power. He began to eyeball various American V-8s as the answer to his quest -- Chrysler, Oldsmobile, even the much-vaunted Chevrolet small-block -- but most of the engines were too bulky for the little Alpine's engine bay. Further, General Motors was not much interested in making a deal that would create a good, low-priced alternative to its Chevrolet Corvette. So Garrad's solution seemed to be Carroll Shelby's solution -- the recently introduced Ford 260 cubic inch V-8 that had been designed to breathe new life into the compact Ford Falcon.

In the true spirit of "if you can't beat 'em, join 'em," Garrad enlisted Shelby and fellow West Coast road racer Ken Miles to install the small Ford V-8's into Sunbeam Alpines. The two remodeling projects proceeded in the two separate race shops in Southern California during early 1963 and by May of that year the two "prototypes" were ready for some drive testing.

It turns out that Miles took a very simple approach, fitting the Ford V-8 into a largely unchanged engine bay and retaining the recirculating ball steering. Shelby and his technician, Bill Carroll, schooled by the AC Ace conversion, took things farther. They moved the engine rearward in the chassis to try to approximate the Alpine's nearly 50-50 weight distribution. This required some reshaping of the firewall and the transmission tunnel, but the result was worth it. Shelby also installed a four-speed manual transmission -- much better than the two-speed automatic in the Miles car -- and added a rack-and-pinion steering unit. Then, rather amazingly, Shelby and Miles, now working in cooperation, did a great deal of development and durability testing, including high-speed runs in the Mojave desert and, even more taxing, stop-and-go on California freeways.

By the Summer of '63, the as-yet-unnamed Ford-powered Alpine was ready for a trip across the ocean to gain the approval of Lord William Rootes of Ramsbury, who had begun his motoring career some 50 years before as a penny-a-day apprentice at Singer. 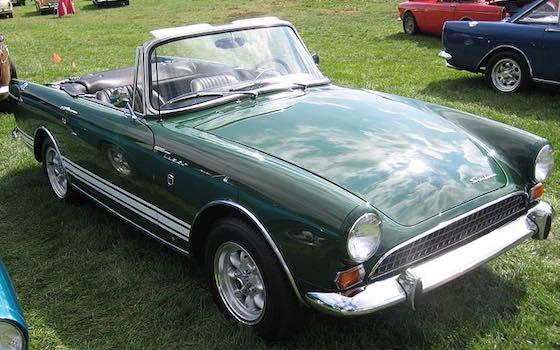 Despite his advanced years, Lord Rootes gave the car a thorough flogging, including a 100+ mph run down a local highway and suspension-testing attacks on winding English roads, and by the time he returned to the factory he was sold. He established an official Rootes factory project code-named Thunderbolt to develop the car further, and work on the project proceeded at speed.

By the spring of 1964, the car, now called Sunbeam Tiger in honor of Sir Henry Seagrave's special V-12 Sunbeam land speed record car that had captured the world record at 152.33 mph in 1926, was ready for a public introduction. That came in the New York Auto Show where the car debuted with an attractive list price of $2,295 for a four-speed manual transmission version. (A version with automatic was priced $500 higher.)

With a wheelbase of 86 inches and an overall length of 156 inches, the new Tiger was almost spot on to the dimensions of the present-day Mazda Miata. Rootes engineers did a great job preventing the car from gaining too much performance-robbing weight. At 2565 pounds the Tiger was 285 pounds heavier than the Alpine IV, and most of that added weight came, not from the Ford engine, but from the chassis-strengthening that Rootes specified to accept the added horsepower and torque.

In stock trim the Tiger's Ford V-8 offered 164 horsepower, so the resulting 0-60 time of 7.8 seconds was good but not mind-blowing. However, simultaneous with the launch, Carroll Shelby and Rootes began to offer what was called the L.A.T. 1 Stage 1 tuning kit that included such go-fast equipment as "wilder" cam, solid valve lifters, heavier valve springs, performance distributor, four-barrel carburetor and aluminum manifold. The resulting 245 horsepower turned the Tiger into a true Cobra-fighter.

Understandably the Sunbeam Tiger began to gain positive notices from the motoring press, who immediately glommed onto the Cobra connection. They also praised the Tiger as being much more civilized than the Cobra with its roll-up windows and pleasant interior design. But, sadly, just as the launch and first sales year were unfolding positively, dark clouds hovered around Rootes Group in Britain. Since 1960 the company, which had long enjoyed a reputation as a caring employer, was plagued by Communist-inspired wild-cat strikes that had a huge effect on the company's bottom line. Finally, Lord Rootes saw the inevitable and began to court ties with Chrysler Corporation. By early 1965 Chrysler had effectively taken over Rootes Group via an acquisition of 83.2 percent equity.

This effectively spelled the impending doom of the Tiger, since Chrysler was not eager to continue to market a sports car that carried a Ford powertrain. Production of the Tiger continued into the 1967 model year, and the Mark II version featured the larger-displacement 289 cubic inch Ford V-8, making it one of the most desirable of the Tigers. But then, after a total of 7,067 Sunbeam Tigers had rolled from the Rootes Coventry assembly line, the vehicle went out of production for good.

In the 1960's the makers of the timid Sunbeam Alpine hired Carrol Shelby to drop some V8 excitement into their sports car. The result, is the thunderous Sunbeam Tiger.