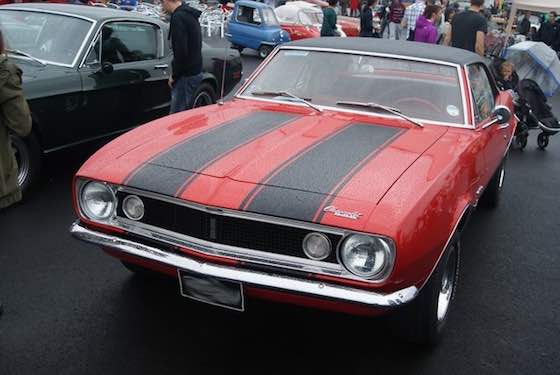 The wild success of the Mustang combined with Ralph Nader's attacks on the Corvair helped launch Chevy's Camaro entry into the 'pony' car race.

The common conception is that Ford introduced the Mustang in 1964 to incredible success, and the folks at arch-rival Chevrolet simply copied the concept to unveil the Camaro in 1966 for the 1967 model year. Fact is, though, the story is not quite as simple as that. Despite commonly held impressions, if one takes an oblique look at history, one might assert that Chevrolet, not Ford, actually introduced the small, personal sport coupe or "ponycar" and that Ford was the company that was playing catch-up when it introduced the Mustang.

What are you talking about, you might ask. Let's go back for a moment into the late Fifties when American Motors and Studebaker began to have some success with their so-called compact cars, the American and the Lark. At the same time, Volkswagen was having unprecedented success selling its legendary Beetle in the United States. With some of their sales being siphoned off, Ford and General Motors decided to do something about this unwanted competition, but they proceeded in two radically different manners.

Ford took a page from the American Motors and Studebaker and designed what was essentially a scaled-down American car, which it dubbed the Falcon. GM's approach was more "reach-out." Taking a page from the VW book, it entered the compact car market with a rear-engine, air-cooled model it called the Corvair, a car that the enthusiast magazines quickly labeled "the poor man's Porsche." While the Falcon that begat the Mustang was thoroughly mundane, the Corvair, despite what former Presidential candidate Ralph Nader would have you believe, was filled with engineering innovation. Further, it was one of the best-handling American cars of its era with its at-the-time very rare all-independent suspension. Further, as the model years passed, it continued to receive horsepower upgrades, culminating in a turbocharged six-cylinder version that was pretty hot. What this meant is that if you were shopping for a small, agile, reasonably high-performance coupe from an American manufacturer in 1963, your best choice was quite possibly a Chevrolet Corvair.

Of course, with the introduction of the Ford Mustang in 1964, Ford stole much of the Corvair's thunder. But even prior to the Mustang's introduction, Chevrolet designers were toying with similar concepts based on their Falcon clone, the Chevy II. One of these concepts, the Super Nova, actually saw the light of day at the 1964 New York auto show prior to the Mustang's launch. When it came to sporty cars, though, Chevrolet was putting its money on the Corvair, which was due for a very attractive restyling for the '65 model year right on the heels of the Mustang's debut.

The immediate landmark success of the Mustang, combined with Nader's attacks on the Corvair in his book Unsafe at Any Speed, finally forced Chevrolet executives to get off the dime on a Chevy II-based sporty car. Further, they demanded to have a model in showrooms for the start of the '67 model year, giving designers and engineers less than two years to build what would be the first Chevrolet Camaro. Luckily, Chevrolet's parts bins were filled with good pieces. For the engine compartment, there was the legendary small-block V-8, a better-than-decent in-line six cylinder and, within months, a version of the big-block V-8 engine as well. Similar to Mustangs, Camaros could be had from mild to wild with price tags that reflected excellent value for the money. 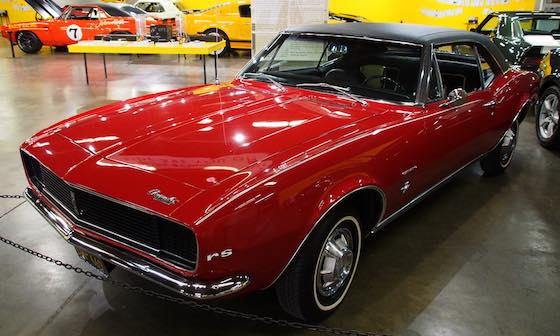 Like the Chevy II, the first Camaro was a strange mix of unibody and separate body-and-frame techniques. From the cowl rearward the Camaro was a unibody car, but the car used a ladder-construction "stub-frame" ahead of the cowl for the engine bay. The front suspension, a double-wishbone arrangement, was borrowed from the mid-size Chevelle, while the rear suspension was a very mundane live-axle design directly from the Chevy II. Early Camaros also borrowed the Chevy II's single-leaf rear springs initially, but more powerful later versions were fitted with conventional multi-leaf springs.

When it came to styling, the Camaro borrowed the Mustang's long-hood short-deck profile, but in other ways it was remarkably different from the car that spawned the ponycar craze. Instead of tracing around the Mustang or more sophisticated Mercury Cougar, Chevrolet designers led by Henry "Hank" Haga developed the Camaro's design based on the Chevy look exemplified by the Super Nova show car, the '65 Corvair and the '65 full-size Biscayne/Bel-Air/Caprice. With its big "hips" over the rear wheels, the Camaro also echoed such great GM shapes as the '58-'62 Corvette and the '63 Buick Riviera. With its full-width grille, understated round headlights and vestigal bumpers, the Camaro presented a pretty face, and its rear treatment with simple rectangular taillights was equally appealing.

Depending upon how much one wanted to spend, the Camaro interior ran from spartan to luxurious. A pair of round gauge nacelles greeted the driver through the thin-section three-spoke steering wheel. Radio and heater-ventilating controls occupied the center of the dash above an optional center console that was home for a three- or four-speed manual shifter or the two-speed Powerglide shift selector. The two front seats are often described as "buckets," but more accurately they are separate nearly flat benches. The rear seat accommodations were on a narrow bench with upright seatbacks, not designed for long journeys.

Right from the beginning, the Camaro's performance, if optioned correctly, was robust. For example, a '67 model with the 295-horsepower, 350 cubic-inch version of the Chevy small block could zoom from zero to 60 miles per hour in 7.8 seconds, a more than respectable performance. Some reviewers of the era actually preferred the all-around balance of the six-cylinder versions, even though they were down 140 horsepower versus the V-8, but real buyers always went for the inexpensive bang of the up-level V-8 offerings.

The Chevrolet Camaro was an immediate hit in the marketplace. More than 220,000 were sold in the first year alone, and sales were further boosted when the Trans-Am racing series Z/28 version began to take win after win, driven by Mark Donohue and others. With continual updates, the car remained a strong seller even through the fuel-challenged mid-Seventies. An early Eighties re-design rejuvenated the car's popularity, but popularity waned in the Nineties and as this is being written GM is again giving hints that the Camaro's proud days might be numbered.

This is the year of the Camaro -- the car of today! - Fascinating original promo film for the new Camaro in 1967.