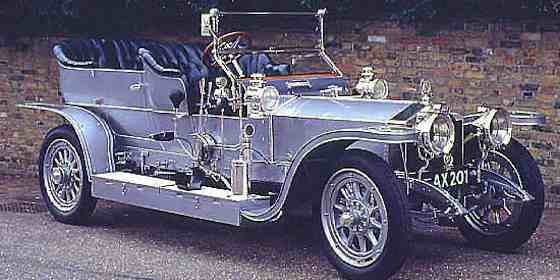 Immediately after its 1907 debut, the Rolls-Royce Silver Ghost embarked on a 2,000 mile endurance run proving the car's unparalleled quality and reliability.

By the time Rolls and Royce met in 1904, the latter had escaped the dreary lower class life in London to turn himself into a success. It was a difficult struggle, because Royce's father died when the boy was nine, and he was immediately thrust into the role as a breadwinner for the family. Trying to do his bit, he sold newspapers and delivered telegrams, but luck finally smiled his way when an aunt lined him up an apprenticeship at the Great Northern Railway.

While on this apprenticeship, he learned the basics of the machinist's trade, and he also began to study electricity, a relatively new field of endeavor in 1879. When he spotted an ad for the London-based Electric Power and Light Company, he parlayed his off-the-cuff knowledge into a job.

By 1884 Royce and a friend, A.E. Claremont, had set up their own electrical engineering firm in Manchester. The little company quickly found itself on the road to disaster until Royce designed a battery-operated doorbell that caught the public fancy. Soon thereafter the firm launched into the manufacture of dynamos of Royce's design, which began to earn the company a reputation for quality and reliability. Within a few years Royce's company was solidly profitable.

His Horatio Alger story might have ended right there had it not been for a passing flirtation with the infant automobile. On a whim, Royce bought a second-hand car and began tinkering with it. The Decauville he purchased was fitted with a two-cylinder, 10-horsepower engine and was fairly well-representative of the "light" motor cars of the era.

To Royce, a man who had built his business on precision, the little Decauville was far more uncivilized than he thought it should be. Part of the problem was that the internal combustion gasoline engine was still in its infancy. Rudimentary aspects like carburetion, ignition timing and engine balance were yet to be worked out. And another part of the problem was that most of the concerns that set up auto manufacturing operations were not overly concerned with precision assembly. Royce was convinced he could do a better job.

With the help of two apprentices, Royce proceeded to build his own motor car using the Decauville as the example, but refining the design in every way possible. Most of the refinement came in the engine, which Royce designed and built with great care. An in-line two cylinder, the engine used very advanced manifolding, ignition and carburetion, all devised by Royce, though the ignition and carburetor were based on the designs of others.

On April Fool's Day, 1904, Royce's first motor car was ready for its first test drive. It performed flawlessly as Royce drove to his house in Knutsford and then back to the Cooke Street works in Manchester, followed by his apprentices in the Decauville. The Royce motor car's successful maiden outing drew almost no attention from the press and absolutely none from Lord Llangattock's son Charles Rolls. Rolls had been an automobile enthusiast since 1896, when he brought over a Peugeot from France and drove it in violation of England's much-despised "Red Flag" law. (The Red Flag law required that a man on foot carrying a red flag precede each motor vehicle on public roads, effectively thwarting the auto industry.) But by 1904, new automobile companies were springing up almost every day, so the work of a Manchester electrical-engineer-turned-car-maker, was of little interest to the worldly son of nobility.

Rolls' name had first come to prominence in motoring circles in 1900 when his performance at the British Automobile Club's "1,000 Miles Trial" netted him a gold medal. Soon thereafter, he partnered with Claude Johnson, formerly of the Automobile Club, as selling agents for Panhard et Lavassor and Minerva automobiles.

These were among the premier automobiles of the day, so Rolls displayed little interest when an acquaintance of his from the Automobile Club, Henry Edmunds, suggested that he test drive a Royce motor car. Finally persuaded, he journeyed to Manchester, met with the rather reticent Royce, and then got behind the wheel of the Royce two-cylinder. From the start Rolls realized that the car was far more than just another shaky two-cylinder. He quickly arranged for his partner, Charles Johnson, to visit Royce and sign him to an exclusive representation deal.

For the upcoming Paris Salon, Johnson asked Royce to prepare not only his two-cylinder machine, but also a 3-cylinder chassis, 4-cylinder car and 6-cylinder engine. When the formal agreement was signed on December 23, 1904, it stipulated that the cars be labeled Rolls-Royce.

It was a terrific marriage. Rolls, the noted performance driver, served as the front man; Royce, the detail-oriented engineer, was the production genius; and Johnson, the behind-the-scenes marketing strategist. By the spring of 1905 Rolls-Royce automobiles were offered to the public in 2-, 3-, 4- and 6-cylinder form, each one hand-built to Royce's exacting specifications.

Throughout the summer of '05 the Royce artisans, at Johnson's behest, worked tirelessly on two 20-horsepower cars that would race in the inaugural Tourist Trophy race on the Isle of Man. On race day, Rolls ran into gearbox problems that may well have been the result of driver error, but Percy Northey, driving the other Rolls-Royce entry finished second. Though it wasn't a victory, it did put Rolls-Royce on the map.

Still, Johnson wanted a six-cylinder-powered car, because that was the obvious wave of the future. Royce obliged by fashioning a six from two three-cylinder engines grafted back-to-back using a common crankshaft of uncommonly large heft and strength. Royce also deviated from the then-common practice by positioning the cranks on the shaft at 120-degrees rather than 180-degrees. This resulted in a significantly smoother-running engine and is the arrangement used by most in-line six cylinder engines to this day. 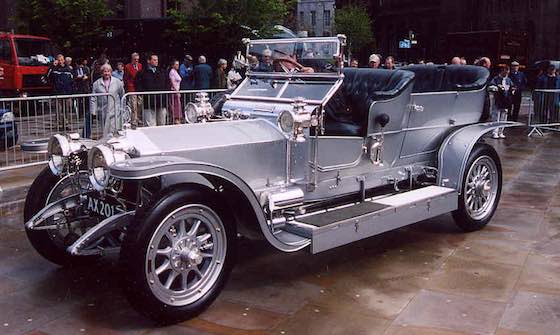 In other elements the Rolls-Royce six cylinder was common practice circa 1906. The heads were integral and, though his two-cylinder had used overhead valves, the six was an "L-head" with exposed side valve gear. Unlike many other engines of the day the tappets were adjustable.

The engine, which produced 48 peak horsepower at 1250 rpm, was not nearly so remarkable in its design as in its flawless workmanship. When many engine designers were enclosing their valve-operating mechanisms for the sake of noise control, Royce simply made certain that his were built so well they didn't make noise. The same attention to detail was obvious in all other areas of the car, from the brakes to the four-speed (with overdrive) gearbox.

One of Royce's most important areas of development was in the carburetor. Through impeccable machine work he was able to modify the Krebs-type carburetor so that it would allow the car to accelerate smoothly from three to 60 miles per hour in top gear without sputtering, something that was impossible in other cars of the day (and of this day for that matter.)

Initially dubbed the 40/50 (a poor name topped only by the ill-advised "Legalimit" of 1905), Royce's handiwork was so good that Rolls had an easy time in winning the Tourist Trophy race that year at an average speed of 39.3 miles per hour.

When 1907 dawned Johnson began to pull out all the promotional stops. In an era of polished brass radiators, he had a 40/50 chassis fitted with a silver-painted touring car body, while the headlamps and other accessories were finished in silver. He named this show car the Silver Ghost and immediately sent it on a 2,000 endurance run under the watchful eye of the Royal Auto Club. The Silver Ghost aced that test, and then immediately embarked upon others that proved without a doubt that it was a car of unparalleled quality and reliability.

By 1909 Rolls-Royce Ltd. had dropped its other models to concentrate all its efforts on the 40/50 Silver Ghost. It would remain in production for 19 years, and provide the legacy that supports Rolls-Royce Motorcars to this day.

The Rolls-Royce Silver Ghost, is the car that made its reputation as the most reliable luxury car builder in the world. This shimmering car was impossible to ignore. It quickly became known as The Silver Ghost, a name that was bestowed on it because its shimmering appearance and the fact that it moved as quietly as a ghost.

In 1907 the Silver Ghost name was born when Rolls-Royce managing director, Claude Johnson, who was known for his promotional skills, silver plated all the fittings of a 40/50 horsepower Rolls-Royce, and while he was at it, painted the body silver. The Silver Ghost name caught on and was eventually used for all the 40/50hp cars built between 1907 and 1925. The original car earned its place in automotive history by helping to forge the reputation of Rolls-Royce as the builder of the most reliable cars in the world. In May 1907 Johnson, under the watchful eye of the Royal Automobile Club (RAC), drove the car to Scotland and back using just one gear. A feat made possible by the high torque engine. The Silver Ghost covered the 2000 mile route with no problems and later, Johnson and a team of drivers motored effortlessly up and down Britain for almost 15,000 miles virtually non-stop, without any breakdowns. This was more than twice the existing record of 7,089 miles. The car was awarded a gold medal by the RAC and it secured its place in history.