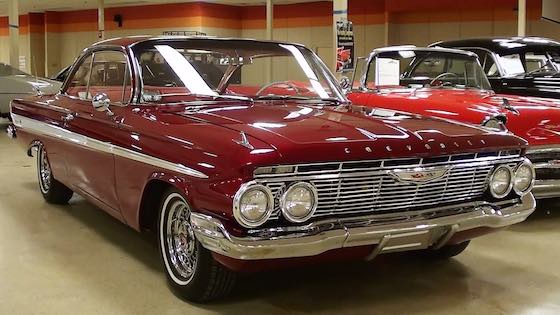 The story of the Chevrolet 409 actually goes back to the mid-Fifties, when Chevrolet was preparing the follow-ups to its landmark 1955-57 series.

The Chevrolet division of General Motors Corporation was a far different animal 40 years ago than it is today. These days, Chevy's cars are timid, awkward and apologetic. In styling, powertrain, and overall execution, they are a far cry from the best the world has to offer. GM still sports some of the best engineers in the business, but today's Chevys, sad to say, are also-rans. Take it from us, though, things were different in 1960. Way different.

In the 1960 model year Chevrolet was the number one nameplate in the land, registering a whopping sales total of 1.7 million vehicles, fully justifying the U-S-A-1 license plate. There was talk of breaking up General Motors, because it controlled such a large percentage of the total vehicle market, and the key reason was the ringing success of the Chevrolet division. When Dinah Shore warbled, "See the USA in your Chevrolet," on her popular television show, a lot of people apparently took her suggestion to heart.

There was a good reason Chevrolets were so popular as the Fifties turned into the Sixties -- Chevys were great cars! In those days the brand offered it all -- eye-catching styling, solid build quality, leading-edge powertrains and unparalleled value. No wonder that in 1960, Chevrolets accounted for more than one in every four cars sold in America. They deserved their popularity. Ed Cole, the fabled engineer-turned-Chevrolet Division head, had done his work stunningly well.

The story of the Chevrolet 409 actually goes back to the mid-Fifties, when Chevrolet was preparing the follow-ups to its landmark 1955-57 series. In those expansive times bigger was always thought to be better, so the 1958 models were conceived to be significantly larger than the fabled '57s, longer by nine full inches and with a beefier X-frame. What this seemed to call for was an even bigger V-8 engine than the small-block that had been introduced in 265-cubic-inch form for 1955.

Though the small-block was quickly boosted to 283 cubic inches, Chevy engineers decided to create a 348 cubic-inch big-block engine to reside at the top of the engine range for '58. Since arch-rival Ford was offering a 352-cubic-inch "Interceptor Special" in its top-of-the-line models, this seemed to be a wise course. Unfortunately, the resulting 280-horsepower "Super Turbo-Thrust" V-8, even when fitted with a complicated trio of two-barrel carburetors, was just so-so compared to the top-rated 283s, which weighed more than 100 pounds less. Chevrolet tried to remedy the situation later in the '58 model year with its 315-horsepower "Law Enforcement" version of the engine, but with solid lifters, the lumpy "Duntov" cam and a three-speed manual transmission, not too many civilians stepped up to that package.

In 1959, Chevrolet really went off the deep end in terms of wretched excess. Compared to the elegantly simple 1955 model, the '59 was as exaggerated as an Audrey Hepburn hat. The '58's 117.5-inch wheelbase was stretched to 119 inches, and the car's overall length jumped to 210.9 inches. But most exaggerated of all was the body style: huge expanses of glass followed by a wild, gull-wing rear-end treatment. Buyers apparently thought the new model was a bit much, because Ford actually out-sold Chevrolet that year by about 50,000 units.

Cole wasn't ready to throw in the towel, though. Instead, he toned the excess down considerably in the 1960 version of the car, and he had his engineers begin preparing a new, more svelte Chevrolet for 1961. That car was shorter than the '60 version by more than an inch and narrower by nearly two-and-a-half inches. Plus, it was bereft of tailfins. Instead, the crisply drawn side panels merged with an elegant chrome sweep across the top edge of the trunk lid. While not quite as exquisite as the '55, it was darn close, especially in sport coupe form. 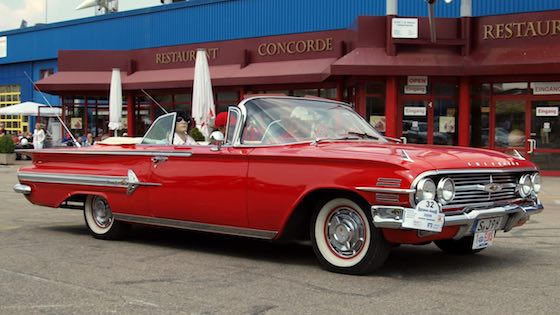 Into the engine bay of this worthy vehicle was dropped Chevrolet's first 409 cubic inch V-8, a direct descendant of the 348. Dubbed "Turbo-Fire," the 409, whose production began in January 1961, boasted a single Carter four-barrel carb that supplied enough fuel-air mixture to conjure up 360 horsepower. And that was just the beginning; with a bit of hot-rodding, more than 400 horsepower was easily available.

All this did not go unnoticed on the dragstrip, where Chevrolet was waging a secret war for supremacy while supposedly staying out of motor racing. Don Nicholson showed up at the 1961 National Hot Road Association Winternationals in Pomona, California, with a new 409 and promptly cleaned everyone's clock. His full-size family car zipped through the quarter mile in 13.58 seconds at a heady 105.88 miles per hour. The car was said to easily romp from zero to 60 mph in under six seconds. Certainly, this was enough to inspire some early Brian Wilson tune-smithing from the Hawthorne, California-based Beach Boys.

While the 409 version of the '61 Chevrolet definitely lit up the street, it did not light up the sales charts. By the time the model year ended only 142 souls had scooped up 409s, and a high percentage of those were destined for life on the track, not street duty. Maybe the stiff (for the time) $425 premium for the 409 kept many buyers at bay.

A similar situation was developing around the Super Sports package that Chevrolet offered on 409-powered cars and selected top-performing 348s. The SS package included such good stuff as power brakes, power steering, sintered metallic brake lining, heavy-duty spring and shocks, plus appearance niceties like "spinner" wheel covers, white stripe tires, tachometer, and a passenger "grab bar" on the dash ala Corvette. But though all this largesse was offered for a piddling $54, only 453 buyers purchased the package in the '61 model year.

The following year was a different story. First the 409 engine itself was vastly improved with a new block casting, cast alloy heads, bigger intake valves and a 11.0:1 compression ratio. When topped with a single Carter carburetor, the '62 409 returned 380 horsepower, and equipped with two four-barrel carbs (the fabled "dual-quad" of song) it offered a reported 409 horsepower. A "Tri-Power" triple two-barrel version was also available, but few wanted to wade into that mechanical nightmare.

At the wheel of 1962 409s Hayden Profitt won the Mr. Stock Eliminator title, while "Dyno" Don Nicholson copped a second Stock Eliminator title at the Pomona Winternationals. That same year a Bel-Air sport coupe version of the car equipped with the "four-speed, dual-quad, Positraction" equipment prescribed by the Beach Boys managed an astounding 12.22-second quarter mile at 115 miles per hour. Zero to 60 miles per hour could be negotiated in four seconds flat.

"Civilians" looking for a strong dose of performance for the street began to flock to the 409 in larger numbers. Some 15,000 customers bought big-blocks in 1962, and for the '63 model year Chevrolet, under new GM Semon "Bunkie" Knudsen, upped the ante of 409 choices with a 425-horsepower dual quad version, a 400-horsepower single-carb version and a more streetable but still potent 340-horsepower single-carb offering.

Car Life testers of a '63 model equipped with GM's rudimentary Powerglide automatic transmission commented on how easy it was to break the rear tires loose simply by stomping the accelerator. "Keep in mind one important proviso," Car Life wrote, "It is not good judgment to put your foot down too hard when coming out of a corner, or when crossing a wet spot on the street. With so much acceleration available it is possible to pull out of a side street in front of oncoming traffic and punch it so hard the car will spin out!"

Various versions of the 409 engine were offered into the 1965 model year on the big Chevys, but time was beginning to pass them by. The new Chevelle, a smaller Chevrolet model, was beginning to pick up the performance mantle for the brand, and Chevrolet engineers developed a new 396 cubic inch big-block V-8, which replaced the 409 mid-year in the '65 model run. But, as the Beach Boys might tell you, it was fun, fun, fun while it lasted. She's real fine, my four-oh-nine.

I thought you might like a look at this beautiful 1961 Chevrolet Impala bubble top. This car is powered by the legendary 409 V8, backed by a four-speed manual trans. They have done an amazing job on the entire restoration as well. The paint is amazing, the interior has be completely redone, and it is about as clean under the hood as it gets. Nothing needs to be done to this car, it's ready to go out and win some shows right now. Thanks for taking a look at it, we appreciate it!