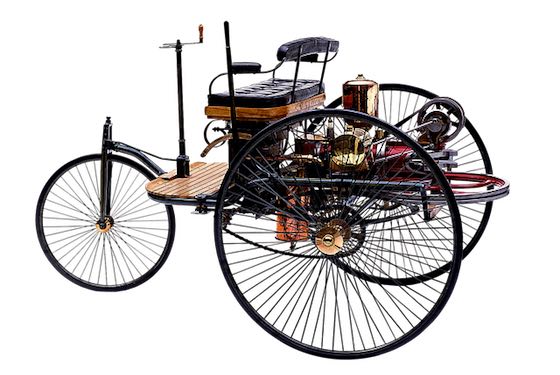 Despite what in some ways was a primitive contraption, the first automobile was a far cry from a carriage with a motor on it.

The conventional wisdom suggests that early automobiles were simply carriages equipped with crude engines instead of a horse. But when it comes to the first car, that conventional wisdom isn't just unwise, it's also false. Karl Benz was such a visionary that even his first motor vehicle was designed from the ground up as an automobile, not a retrofitted carriage.

Ironically, the man whose invention would ultimately threaten the viability of railroad travel was born the son of a German railway man. Though his father died when Benz was just two years old, he eventually followed him into the railway industry. It was Benz's mother, however, who had the most influence on the budding engineer. She scrimped and saved to send him to polytechnic, where he studied mathematics and steam engine design, and she encouraged him when he told her that he would one day build a vehicle that would not need rails.

After leaving college Benz landed a position in a locomotive factory, but his schooling was somewhat wasted there because most of his waking hours were spent banging on iron with a hammer. Soon Benz tired of the drudgery and opened his own machine shop, but within a few years the business failed and its assets were auctioned to pay creditors. Though a seeming tragedy at the time, the failure of the business turned out to be a blessing because it gave new impetus to Benz's dream of creating a motor vehicle unfettered by rails.

Of course, a compact engine was the key ingredient in designing such a vehicle, so Benz kept a close eye on the engineering developments of the time, developments that included Nikolaus Otto's four-stroke gas engine. Unfortunately for Benz, Otto patented his invention, so Benz concentrated his early efforts on two-stroke engines. He finally developed his first operating prototype on New Year's Eve 1879.

With a successful engine on display in his workshop, Benz was able to gather some financial backers to market the coal gas-powered units, but his mind was still on his dream of a motor car. When he announced his intention to proceed on that idea, several of the venture capitalists got cold feet and attempted to talk him out of the fool notion.

Benz persisted, however, and he proceeded with his plan. When Otto's patent lapsed, Benz began experimenting with four-stroke powerplants and eventually put together a tiny, one-cylinder engine that featured three innovations that are still in use today -- an electric battery, spark plug and electric coil ignition. 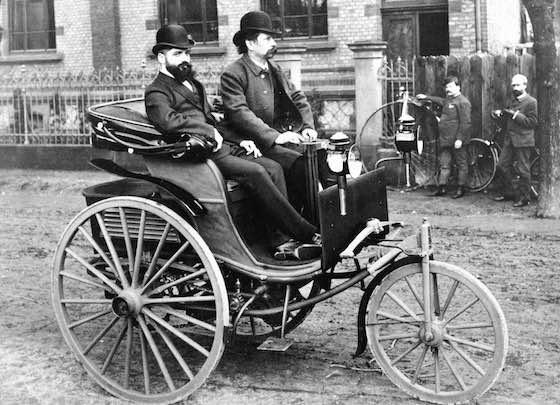 Of course, these three innovations didn't come together at once. Benz's first attempt at electric ignition used a generator in conjunction with the coil, but the generators of the early 1880's were not up to the task, so the inventor shifted to an electric storage battery, again using the coil to build up the voltage to the desired level to produce a sizable spark. The sparkplug itself consisted of two lengths of insulated platinum wire intruding into the combustion chamber.

Though the ignition system on the Benz engine was in many ways very modern, the fuel induction system was anything but. The engine didn't use fuel injection or anything resembling a true carburetor. Instead fuel drained into a can filled with fabric fibers and then evaporation carried the fumes into the cylinder.

Steering was also rudimentary. Benz wanted to build a four-wheel vehicle, but the engineer who had solved many of the problems of the internal combustion engine was unable to work out a satisfactory two-wheel steering system. To remedy that difficulty he fitted the vehicle with a single front wheel, which could be turned by a remotely mounted tiller.

Despite this primitive set-up, however, the first Benz Motor Wagen was a far cry from a wagon with a motor on it. The chassis of the vehicle was fashioned of steel tubes, just like a Ferrari, and the large rear wheels were attached to it with a genuine suspension system -- full elliptical springs. Rubber tires were fitted, but they were non-pneumatic, transmitting the poor quality of the contemporary road surfaces directly to the driver and passenger's backsides.

Crude as some elements of the vehicle were, however, Benz did make an effort to engineer key aspects of the vehicle including weight distribution, engine cooling, rear end differential and the semblance of a gearbox. To allow the car to idle, Benz worked out an arrangement of two pulleys, one rigidly connected to a countershaft while the other turned freely on the shaft. When Benz wanted to stop the vehicle he would apply the handbrake, which closed a band on the countershaft, and pushed a rod that moved the driving belt from the fixed pulley, allowing the engine to idle without driving the wheels.

Engine power was transmitted to the wheels via two bicycle-style chains running to sprockets on the rear wheels. The final distinguishing feature of the Benz car was its huge flywheel, which Benz mounted horizontally for better weight balance.

Benz first attempt to drive his creation in 1885 resulted in the first recorded automobile accident. In an enclosed area outside his Mannheim, Germany, workshop, he started his car successfully and got it underway, but, unaccustomed to the steering, he missed the open gateway and crashed into a wall. The car was damaged, but Benz was undaunted by the mishap, and soon he was motoring around Mannheim at four or five miles per hour, often to the consternation of his neighbors. 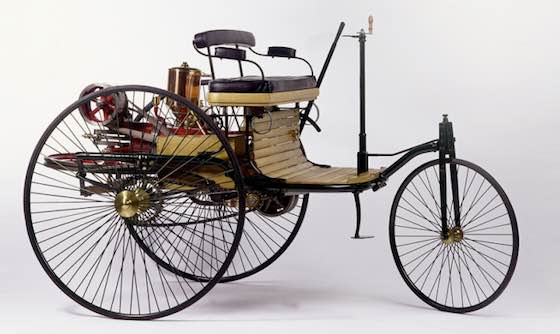 By 1888 the Benz Motor Wagen was in production for sale, but buyers weren't exactly standing in line for the new creation. That is, until Benz's wife and two sons drove the vehicle from Mannheim to Pforzheim, a distance of some 70 miles. The car has hardly trouble-free on the journey, but it made the trip in less than a full day and, because the Benz family outing was widely reported in the press, it proved to be a marketing coup.

Buyers finally came knocking, and, after reorganizing the company in 1890, the Benz motor works was on its way as a commercial enterprise. Soon Benz was offering a four-wheel car he dubbed the Viktoria, which in turn was followed by the Velo, the first attempt at volume production.

The Benz concern faced increasing competition as the Nineties ended, and in 1903 Benz briefly left his own firm in a huff, but he had already made his mark, the realization of his childhood dream -- the first motor car.

Mercedes-Benz traces its origins to Karl Benz's creation of the first petrol-powered car, the Benz Patent Motorwagen, financed by Bertha Benz[4] and patented in January 1886,[5] and Gottlieb Daimler and engineer Wilhelm Maybach's conversion of a stagecoach by the addition of a petrol engine later that year.

Years later they took their original creation out for a test drive.

Others believe that Siegfried Marcus, a German born, Austrian-Hungarian inventor was the first to use a gasoline engine in a car. They contend that Adolf Hitler had the records changed because Marcus was Jewish. Others say that Josef Ganz, who also was Jewish, invented the VW Beetle and was pushed aside by Porsche.