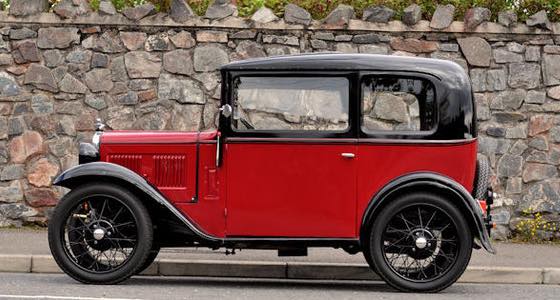 For Herbert Austin, who began his career at Wolseley, a venerable British manufacturer of proper motor cars, good things did come in small packages. Like Henry Ford and Andre Citroen, he had the belief that automobiles were not meant strictly for the elite upper classes but could also find a market in the common man. With that in mind, Austin founded his own company in 1905 and labored toward building a vehicle a wide swath of the public would care to buy. Whereas Ford developed his Model T rather early in his career, however, Austin would build cars under his name for 17 years before he hit on the vehicle that would win him lasting fame.

By the time the Austin 7 was introduced in 1922, Henry Ford had already assembled more than six million Model T's. In fact, during that year alone Ford built 1.2 million flivvers. By the mid-Twenties Fords were being exported to and built in all four corners of the world. All this, though, did not dissuade Herbert Austin from developing his own "people's car" in the British idiom. 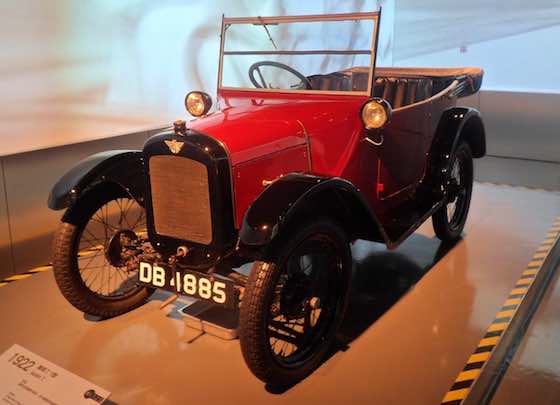 By American standards, the car he and his engineers developed was exceedingly small. The Austin 7 had a wheelbase of just 75 inches, more than two feet shorter than the Model T. Its 40-inch track was also exceedingly narrow, and at 794 pounds it weighed little less than half of a typical Ford of its era.

There was method in this, though. A car weighing as little as the Austin 7 did needed very little horsepower to generate a reasonable amount of speed. What this implied was that a diminutive car could get by with a minimal and inexpensive-to-build engine.

That, of course, it just what Austin had in mind. His "Baby Austin," as it was called, was equipped with an in-line water-cooled four cylinder with a displacement of just 747 cubic centimeters -- in other words, three-quarters of a liter. In typical British fashion its bore (56mm) was significantly smaller than its stroke (76.2mm.) As introduced in 1922, this side-valve four dribbled out 10 - horsepower at 2,400 rpm.

Power went through a conventional three-speed gearbox to the solid rear axle via Hotchkiss drive. The petite rear axle was suspended by tiny quarter elliptic springs, and the entire rear of the chassis consists of little more than longitudinal frame rails which failed to extend as far as the rear-wheel centerline. Minimalist, indeed.

Up front, the suspension was quite similar to that of the Ford Model T and the Peugeot Quadrilette with a transverse leaf spring the key member. From front to rear, the 7's frame has a definite "A" shape, echoing the blunt arrowhead configuration of its various bodystyles.

When it debuted, the Austin 7 was only available with a two-door four-seat open tourer body. To deal with England's notoriously bad weather, the car could be fitted with a collapsible top and side curtains. Perhaps the key distinguishing feature of the design was its spindly wire wheels, which made the car look as if its body were perched unsteadily on sticks. 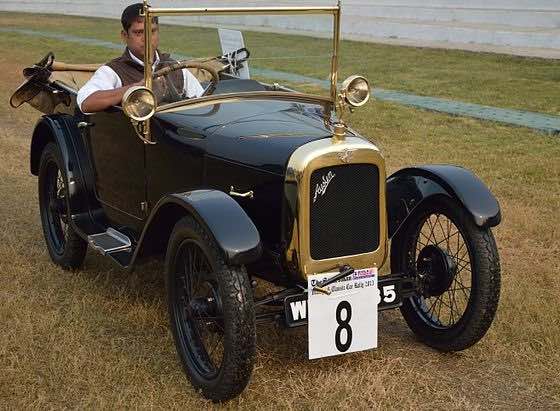 Soon closed bodies followed the touring car, and those designs, because they had to find common ground between the car's minimal wheelbase and the size of actual human beings, are often a bit clumsy looking. On the other hand, because the Austin 7 chassis could be had so cheaply, it very often became the subject of a new body from an outside coachbuilder. In fact, it was the business of building bodies for Austin 7's that got the Swallow Sidecar Company into the automobile business. Of course, the Swallow concern eventually morphed into what is now Jaguar.

The Austin 7 was the antecedent of other car lines as well. In France, an entrepreneur named Lucien Rosengart used Austin 7 mechanicals assembled under license as the basis of a series of roadsters and four-seaters. With some Gallic flair, they were racier than the original and a trifle longer-lived. The 1952 Rosengart Ariette still smacked of the Austin 7.

More well-known is the Dixi, built by the German firm of Eisenach. Like the Rosengart, its coachwork was a bit more substantial and attractive than its progenitor, and unlike the Rosengart it sold in substantial numbers, especially after the Eisenach factory was acquired by motorcycle manufacturer BMW.

Finally, when Herbert Austin visited the United States in 1929 and set up a manufacturing operation for his little car in Butler, Pennsylvania, he thought he was on the verge of conquering the largest car market in the world. Of course, he chose the worst year of the century to begin such an enterprise. By the time production began in May 1930, the Depression had begun and the 200,000 orders Austin claimed he had for the new car never materialized.

Still, the American Austin was a much more attractive car than its British cousin. Styled, at least in part, by Alexis de Sakhnoffsky, the tiny car had the same "kiss me I'm cute" appeal as the original Mazda Miata. Especially precious was the roadster version. With a longer, taller hoodline, more sweeping fenders and a more substantial radiator shell, the American Austin had a rakish feel. Adding to that sense were disc wheels and a shorter windshield (so short, in fact, that the after portion of the convertible top was raised above it by several inches just to offer a modicum of headroom.)

As an early day anti-status symbol, American Austins ended up in the hands of Hollywood notables like Al Jolson, Buster Keaton and the Our Gang child stars, who fit in them nicely, but the little vehicles were no match for the real cars that Ford and Chevrolet were producing at the same or lower prices.

On the other hand, the Austin 7 continued to ring up substantial sales in its native land well into the late Thirties. Like most models that enjoy such a lengthy run, it was the object of "continuous improvement" through the years. A self-starter was first offered in 1924; a fourth (lower) gear was added in 1932; and in 1934 the gearbox went syncromesh. Horsepower also climbed steadily from 10 at its introduction all the way to 16. Sadly, however, weight went up just as rapidly, and by 1937 the car scaled nearly twice as much as it had originally.

Perhaps more important that what it was, was what it did. The Austin 7 made Britain a car-making nation worthy of the world stage, and it spawned three other automotive marques that have, through time, out-distanced the original. For the existence of Jaguar, BMW and the legendary Jeep we can thank the one and only Austin 7.

Tour Scotland video of photographs from a visit to an Austin 7 Vintage Car Rally in Perthshire. This economy car produced from 1922 until 1939 in the United Kingdom by the Austin Motor Company. Nicknamed the Baby Austin, was one of the most popular cars ever produced for the British market, and sold well abroad.