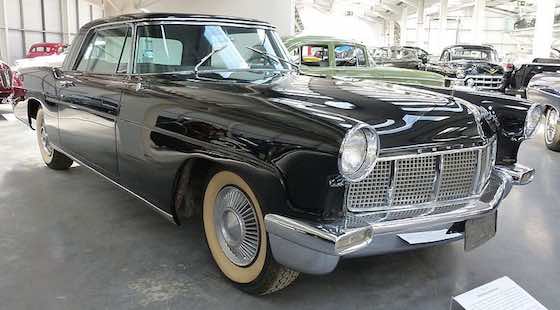 Supposedly, the sequel is never as good as the original; and that is certainly true of the Continental Mark II. The original Lincoln Continental, created as a one-off by Bob Gregorie and his design staff for the personal use of Edsel Ford, was, with little argument, the best American auto design of the 1940's. Mildly production-ized and sold as a series into the late Forties, it was a classic.

Ford Motor Company tried to re-create the same magic some 15 years later with the Mark II, but to re-create magic is a tougher task than the first time. Still, though the Mark II lacked the essential rightness of the original's proportions, it was a car to be reckoned with. By sheer mass, sheer price, sheer presence, it was a vehicle that epitomized 1950's America.

If you are known by the company you keep, then the Mark II deserves high marks. A wide swath of the rich and famous in the 1950's owned one, including Elvis Presley, Frank Sinatra, Louie Prima, Dwight Eisenhower, Barry Goldwater, Spike Jones, Nelson Rockefeller, Henry J. Kaiser, Howard Johnson and the Shah of Iran.

A sticker price that nudged $10,000 ($9,966.00 f.o.b. Detroit) made the Continental Mark II twice the price of a garden variety Lincoln of the same year. In defense of the gargantuan price, the Mark II was hand-built to a very high quality standard such that Ford Motor Company claimed it lost a thousand dollars or so on every one it sold.

That's a believable tale, because the Ford Motor Company of the early Fifties was in some disarray. The still-privately-held firm had weathered World War II with flying colors and leapt into the post-war economy with gusto, but as the Fifties dawned it seemed lost. As a maker of low-cost "transportation" cars and light trucks, it certainly had a big place for itself in the market, but climbing out of its stereotype into the middle-priced and luxury segments proved to be difficult. At the same time, General Motors was cleaning up in that portion of the market with Pontiac, Oldsmobile, Buick and Cadillac.

The executives at Ford Motor Company went through exercise after exercise to come up with a way to gain a strong footing in the upper end of the car market, but the plans that resulted from these excursions into "future-think" were almost invariably scrapped or emasculated. One plan that did bear some fruit was to take Mercury (often derided as Ford with more chrome) and move it upscale into what was approximately Buick territory, introduce a new division (Edsel) to compete in Pontiac-Oldsmobile territory and send Lincoln into headlong battle against Cadillac. An addendum to this plan suggested the creation of a "Special Products Division" to build short-production-run "halo" vehicles to add luster to the Ford Motor Company offerings.

Of course, we all know what happened to Edsel. But what is less well understood was the final addendum to the plan. Ford executives did, indeed, create a "Special Products Division," and its charter was to re-capture the essence of the Lincoln Continental in a new, ultra-luxury vehicle. Given this task, the division quickly morphed into the short-lived Continental Division of Ford Motor Company with none other than Edsel's son, William Clay Ford, as its general manager. Because of this, purists insist the Continental Mark II should not be referred to as the Lincoln Continental Mark II. That, however, is splitting hairs, since the Continental division vehicle was sold by Lincoln dealers, used a Lincoln power train and in all other ways smelled like a Lincoln. 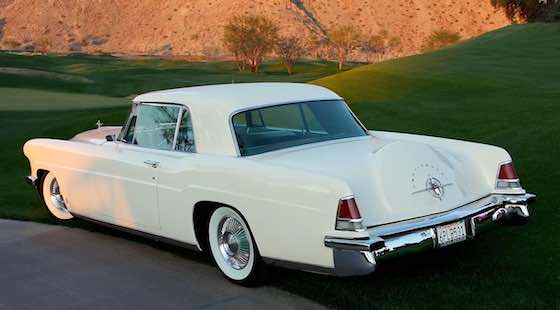 The Continental division created a vehicle with presence. Not only was its price tag big; it was big. A two-door hardtop, the Mark II was built on an enormous Y-shaped frame with a wheelbase of 126 inches. At over 18 feet, it was as long as a Chris Craft runabout, and finished with the same meticulous detail. Further, it was no lightweight. Its body-on-frame construction plus a full complement of luxury equipment, like air conditioning, power-operated windows, power-operated front seat and rich leather upholstery conspired to create a weight that has been variously reported as 4,825 pounds or 5,100 pounds, some two-and-a-half tons.

There was little elegance in its suspension. The independent front suspension was a fairly typical American A-arm arrangement, though one bow to high tech was the employment of "speed-compensating shock absorbers." The rear suspension was even more rudimentary: a huge live axle hung by semi-elliptic springs with hydraulic shock absorbers for damping.

If all that seems ungainly and somewhat crude, there was nothing ungainly or crude about the Mark II's exterior shape. In profile it offered a simple elegance with an extremely long hood, tight greenhouse with a stately roofline and a deck accentuated by stand-up taillights and the famed "Continental" tire bulge. None of Cadillac's tailfin excesses here, though perhaps the faux spare tire was a bit bigger than it needed to be. Tastefully, chrome was kept to a minimum, and the Mark II's handsome grille was remarkably restrained and flanked by two simple round headlights.

What power plant was used to propel this mammoth piece of machinery? A thoroughly modern (for its time) Lincoln V-8 engine was the obvious choice of the Continental division brass. The cast iron-block engine displaced 368.6 cubic inches and, equipped with a four-barrel carburetor, it produced 265 horsepower. (With a bit more tuning the following year, the horsepower was upped to 300 to compete with the Chrysler 300 letter series, which was mining the same vein of customers.) A Turbo-Drive three-speed automatic was the only transmission available.

The car debuted in dealerships on October 5, 1955, and it created an immediate sensation. Certainly the public relations types had something to do with the uproar, but there was mass curiosity to see what Ford built that cost ten thousand dollars.

Buyers got a lot for their money. Each Continental engine was meticulously balanced and tested on a dynamometer before being installed in the virtually hand-built frame. The chrome trim was subjected to a 10-day-long salt spray test, and the intricate front-end body pieces were test fitted before final assembly and the application of premium lacquer paint. Upholstery was fashioned with Bridge of Weir leather imported from Scotland. 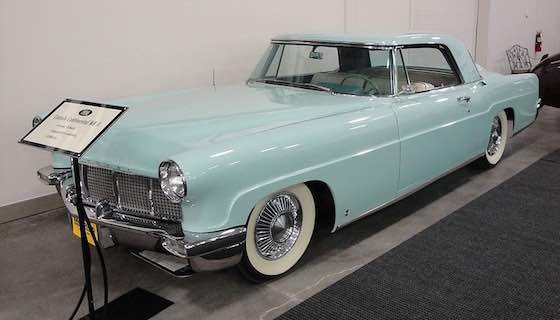 Though the Continental Mark II was met with a great deal of interest, at 10,000 dollars in 1955 the car was too expensive to attract much of a following. Ford executives originally planned to build about 2,000 Mark II's a year for a period of five years, and the model exceeded their projections early on. Some 2,550 Mark II's were built during the 1956 model year, but by the end of the year sales slowed to a trickle. A very slightly revised 1957-model Mark II was put into production, but only 444 were built, and the model and the Continental division itself were abruptly cancelled.

Ford Motor Company decided to take a new tack with its Lincoln vehicles, adopting unit body construction instead of the traditional separate body and frame, and the result was a disaster. Consumers avoided the newly styled1958 Lincolns and, to add insult to injury, Ford brass decided to call the top-of-the-line Lincoln the Continental Mark III with only an oddball roof treatment differentiating it from the run-of-the-mill Lincolns. It wasn't until the late 1960's that Ford saw the error of its ways and tried to recant by offering another Lincoln Continental Mark III, one more in tune with the first Lincoln Continental and its worthy successor, the Continental Mark II.