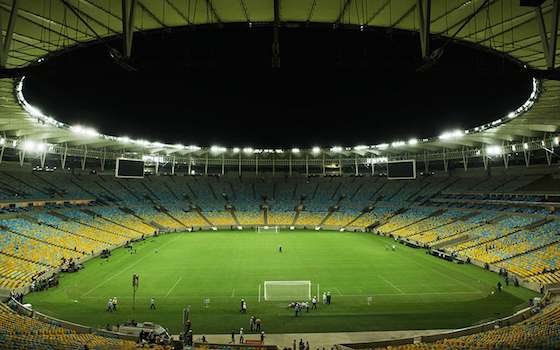 One month ahead of the kick off for the 2014 FIFA World Cup Brazil&trademark, FIFA Secretary General Jérôme Valcke took time for a chat with FIFA.com on the current topics around the tournament.

"Fans can expect a great tournament. That's what we are working on. And they can expect Brazil, which is an amazing country. A country which is about music, samba and a number of things which make Brazil unique in the world."

FIFA.com: Jerome, the World Cup is one month away. Where do we stand?

We are a few days prior to the delivery of the stadiums to FIFA. We are entering the exclusive period of use of the Stadium by 21 May for the first stadium in Sao Paulo. We still have some work to do, outside of the stadium in the surroundings. It's important to work with the cities and states because they are responsible for these areas. We will do our homework, installing all our systems in the stadiums. That’s also an important part of the structure of a World Cup. You feel that the competition is coming, so there is an excitement. In the meantime, it's important to test everything and making sure it's working. We have very important games in Brazil. First the opening game between Brazil and Croatia, then the following day Spain against the Netherlands, which was the final in 2010, and the day after England against Italy. So you have games where 100 per cent of the stadium is used, a high level of hospitality and high level of media interest, so we can't fail in these first five days. The pressure is there to make sure we will be perfectly ready.

Ticketing has been very successful. Are there still tickets available for fans to watch games?

For the fans, there are a few left, because there is the final phase of ticket sales. You can always try to find a ticket, but [the supply] is very limited. The demand is amazing. I don’t think that we've ever had so may requests for tickets. For the opening game in Sao Paulo, Hospitality have announced 14,000 guests. The level of interest from the world and Brazil is huge. Brazil loves the World Cup; the majority of the tickets have been sold to Brazilians because they love football.

Fans from all over the world are getting ready to travel to Brazil in the next few weeks. What can you tell them about what they can expect during the tournament?

They can expect a great tournament. That’s what we are working on. And they can expect Brazil, which is an amazing country. A country which is about music, Samba and a number of things which make Brazil unique in the world. My advice to the fans is to prepare their trip, to avoid making decision at the last minute. The teams are going around the country, and there is a big difference between Brazil and South Africa: the country is big. Organise your trip, make sure you have already decided where you will go.

Brazil loves the World Cup; the majority of the tickets have been sold to Brazilians because they love football.

Security is a big concern for visitors to Brazil. What can you tell the fans who are concerned?

Security is an issue everywhere in the world. It also depends on the way you behave. Make sure that you just enjoy Brazil as Brazil is. If you are told in certain cities that you should not walk in certain zones, you should follow that. There are zones and parts of cities where you don’t go. It's not only in Brazil, all over the world it's like this.

What is FIFA, in co-operation with the government, doing to ensure the security in the stadiums?

The security in and around the stadiums is no issue. Everything is organised here, the same goes for the Fan Fests. It’s a time to enjoy yourself. The security in general is good. Brazil is regularly organising major events. Generally speaking, you are a guest of the country and you should always respect the country where you are.

The squads for the tournament are currently being announced. Which team are you most looking forward to watch?

As the Secretary General of FIFA, none. I will travel around the country and I will mainly go to the different stadiums for a technical view, before supporting any teams. I think it’s a very open World Cup. There are very good teams and it's very difficult to predict who will be playing in the Final. For sure Brazil are expected to play the Final and even to win the World Cup. But there are very good teams: Germany, Argentina, Portugal... and also France are always a team that can play well. I hope they will do better than in South Africa. The South Americans are strong, as well as the Europeans - all of them are strong.

Some people in Brazil say that the World Cup is costing Brazil too much. What can you tell them about the tournament's legacy?

You cannot talk about the legacy at or right after the World Cup. You need few years to see what the legacy is. There are legacies at different levels. The first level is the football infrastructure. They will have a level of stadiums and training camps which are amazing. They have better facilities to play football than before. The stadiums that were used at the Confederations Cup welcome more fans, because the structure is nicer and have a higher standard of international football. Then you have the different cities. Those cities will have changed from the times when they received the organisation of the World Cup, to the time when they will have the games played in the city. There is a different level or urban mobility, accommodation and road network. In South Africa, the lives of the people in some of the cities have changed because those cities have invested a lot of money to change their infrastructure.

When people are saying that we have put something into the World Cup that they could use for other projects, they're wrong. When a country bids for a World Cup, it's not against the interest of the country. It is for the interest of the country. The World Cup is a way to speed up a number of investments in a country. It is easy to criticise FIFA, it's easy to use the Confederations Cup or World Cup to organise demonstrations. But the target is wrong if the target is that FIFA are the reason for what’s happening in a country. If a country is bidding for a World Cup, it's with the idea of developing the country and not with the idea of destroying the country.