NFL 2016: What To Look For: Divisional Playoffs 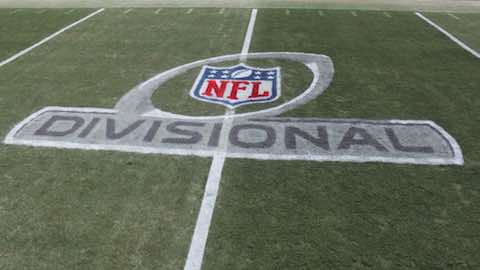 NFL 2016: What To Look For: Divisional Playoffs

Here's what to look for during the Divisional Round of this year's NFL playoffs.

Both No. 1 seeds are in action this weekend when the top-seeded DALLAS COWBOYS host the GREEN BAY PACKERS in the NFC and the No. 1-seed NEW ENGLAND PATRIOTS face the HOUSTON TEXANS in the AFC.

Top Seeds in Divisional-Round Play Since 1990

Four of the five winningest franchises in postseason history -- the Pittsburgh Steelers, Dallas Cowboys, Green Bay Packers and New England Patriots -- are in action in the Divisional Playoffs.

The Steelers, who defeated Miami 30-12 in the Wild Card round, have 35 postseason wins, the most in NFL history. The Cowboys (34), Packers (33) and Patriots (29) rank second, third and fifth, respectively, in all-time postseason victories.

Most Postseason Wins in NFL History

With a win against Houston on Saturday, the Patriots would become the first team since 1970 to advance to six consecutive Conference Championship games.

Most Consecutive Conference Championship Appearances since 1970

Most Consecutive Playoff Games with at Least 100 Yards

Pittsburgh running back LE'VEON BELL had a franchise postseason-record 167 rushing yards with two touchdowns in the Steelers' 30-12 win against Miami in the Wild Card round, while Seattle running back THOMAS RAWLS rushed for 161 yards -- the highest single-game rushing total in team postseason history -- and one touchdown in the Seahawks' 26-6 win over Detroit last week.

Only five different running backs in playoff history have recorded 300 rushing yards over a two-game span in a single postseason.

With two sacks against New England on Saturday, Mercilus, who has five sacks in his past two postseason games, would have the most sacks over any three-game span in postseason history.

Most Sacks Over Any Three-Game Playoff Span

Atlanta quarterback MATT RYAN ranked second in the NFL with 38 passing touchdowns during the 2016 season, including seven games with at least three touchdown passes.

Most Consecutive Postseason Games with at least 3 TD Passes

Kansas City quarterback ALEX SMITH has thrown for 1,309 yards with 11 touchdown passes and one interception in 186 postseason passing attempts.

NFL Football: "NFL 2016: What To Look For: Divisional Playoffs"