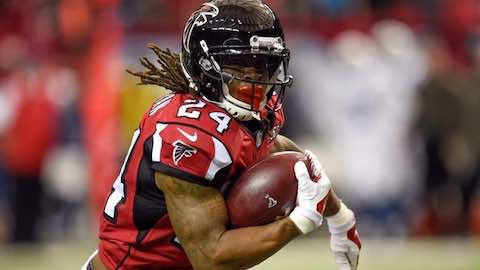 They seem to be all over the NFL. Guys like Doug Martin, Adrian Peterson and others. Those running backs that can hurt you two ways: rushing or catching the ball. Here's a look at the NFL's best dual threat running backs

"That's what you're looking for," says San Francisco head coach CHIP KELLY about dual-threat running backs. "You're looking for a back that can do it all. You want a guy who can be a three-down back."

Atlanta's Devonta Freeman finished seventh in the NFL last season in rushing yards (1,056) and ranked third among running backs with 73 receptions and 578 receiving yards. He was the only player in 2015 with at least 1,000 rushing yards and 50 catches.

"My thing is I want to be a complete back," says Freeman, who was selected to the 2016 Pro Bowl. "I don't want to come off the field. That's my mentality."

Entering his second season as the Falcons head coach, DAN QUINN appreciates Freeman's mindset and his ability to be a dual-threat running back. "I don't think he wants to leave the field," says Quinn about Freeman. "It's such a huge factor for a running back who can catch coming out of the backfield. We know that outside he can catch the ball. Whether it's aligned outside or in motion to the outside or swinging out of the backfield, he can catch out of all three."

More and more offenses are relying on these dual-threat runners to keep the chains moving. Six running backs gained more than 1,000 rushing yards while registering at least 30 catches in 2015.

"If you get a guy like him out in space, whether it's a screen or a flare or an option route, defenders understand they're covering 28, and so they're going to give him the respect that he's due whether it's in the passing game or the running game. All he needs is a little bit of separation and catch the ball and then a lot of good things can happen out there." -- Minnesota head coach Mike Zimmer

[ Check out: How Adrian Peterson Keeps On Rushing ]

"He has a low center of gravity and he's got great vision as far as cutback ability. He's also a guy you have to pay attention to on the check-downs. He can sneak out of the backfield and they run screens with him. He is a dynamic football player that fits exactly what they're looking for." -- Carolina head coach Ron Rivera

"He's a real pro. Just an unbelievably physical runner. He's physically tough. He's mentally tough. He's been a very productive player for us. He's one of those guys who gets better and better the more he carries the football." -- Dallas head coach Jason Garrett

"Ivory is a really tremendous back. He runs hard, breaks tackles, has great balance, is very hard to get on the ground, and he's made plays on check-downs and screens in the passing game, too." -- New England head coach Bill Belichick

"This guy is really going to be an up-and-coming back. He has all the physical tools and he's a three-down back. When he comes downhill, he's a load." -- New York Jets defensive coordinator Kacy Rodgers

"He's just an all-around back. He can do everything you want a running back to do and he's hard-nosed and smart. He can run downhill and stretch the field and run outside. He can run routes like a receiver and has great hands. He can pass protect. He's willing to do everything. The guy is just great. He's just a great player." -- Tampa Bay quarterback Jameis Winston