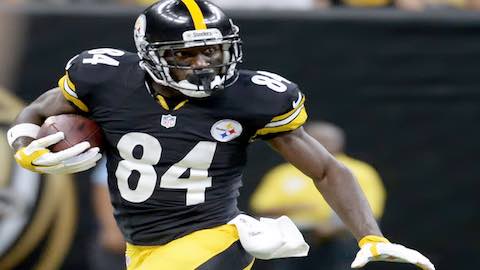 Pittsburgh Steelers wide receiver Antonio Brown's past three seasons have been second to none. In that three-year span, Brown has an amazing 375 receptions for 5,031 receiving yards. As the NFL's elite receiver, Antonio should dominate again this season

Over the past three seasons, Pittsburgh Steelers Pro Bowl wide receiver Antonio Brown has increased his reception total each year. Last season he finished with a personal-best 136, the second-most in a season in NFL history. This season, Brown should eclipse the single-season record of 143 receptions set by Marvin Harrison in 2002.

"He is very driven to prove that he is among the elite guys at his position right now," says Steelers offensive coordinator TODD HALEY about Brown, who also ranks second in the NFL with a single-season franchise-record 1,834 receiving yards in 2015. "I think from a big-picture standpoint, he is one that they will talk about for a long time."

Most receptions in a single NFL season

Brown has 375 catches over the past three seasons, the most in any three-season span in league history.

Most receptions in a three-season span

"The guy is an elite receiver," says former Steelers wide receiver HINES WARD about Brown. "You really can't guard him in any way."

Brown's 5,031 receiving yards over the past three seasons are the second-most of any player in NFL history in any three-year span, trailing only CALVIN JOHNSON (5,137 from 2011-13).

The players with the most receiving yards in a three-year span:

Most Receiving Yards in a three-season span

Brown, who has also returned a punt for a touchdown in each of the past three seasons, is the only player in league history with at least 100 receptions and a punt-return touchdown in multiple seasons (2013-15).

"A.B. is one of the best receivers in the league," says Pittsburgh quarterback BEN ROETHLISBERGER. "He does a little bit of everything. He plays big all the time."