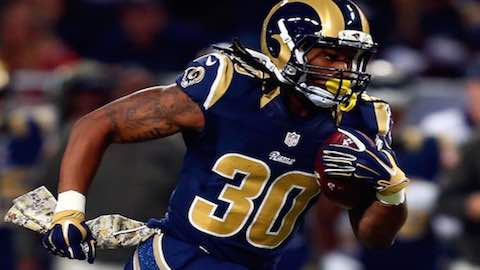 Rams running back Todd Gurley entered the NFL last season and led all rookies with 1,106 rushing yards and 10 rushing touchdowns despite missing three games. Gurley enters this season as one of the NFL's elite running backs. Odds are Gurley's rushing rampage will continue.

Gurley, who was selected by the Rams in the first round (No. 10 overall) of the 2015 NFL Draft out of Georgia, was named to the Pro Bowl and earned NFL Offensive Rookie of the Year honors.

"I keep bringing up that 's' word, which is 'special,'" says Rams head coach JEFF FISHER about Gurley. "He has obviously gotten a lot of people's attention. And just wait. He's only getting better."

Gurley rushed for 146 yards in his first career start in Week 4 and recorded at least 125 rushing yards in each of his first four starts, the first rookie in NFL history to accomplish the feat.

Gurley's 566 rushing yards in his first four starts are the most by any player that began his career in the Super Bowl era (since 1966).

"All those things are cool and they mean a lot," says Gurley about his accomplishments and accolades. "But our main focus is winning and racking up wins every week."

Peterson and Gurley are the only players in NFL history with at least 100 rushing yards in four of their first five career games.

"Todd Gurley is the premier player on that offense," says NFL Network analyst and former Pro Bowl running back LA DAINIAN TOMLINSON. "He's the feature guy that they lean on. As a rookie, he became the main, feature guy for that offense. That speaks to how far along he is in his development in terms of being an NFL running back. He's made this transition seamlessly and a lot of it has to do with obviously his size and speed combination, and also his vision and how smart he is as a football player. He's truly the next great three-down back -- not just running back. He can be a three-down back."

For the season, Gurley rushed for at least 125 yards in five games, trailing only Dickerson (seven in 1983) for the most such games by a rookie in NFL history.

"I felt like I did pretty well," says Gurley about his rookie season. "But I feel like I have a lot of things to improve on. I can definitely get a lot better."