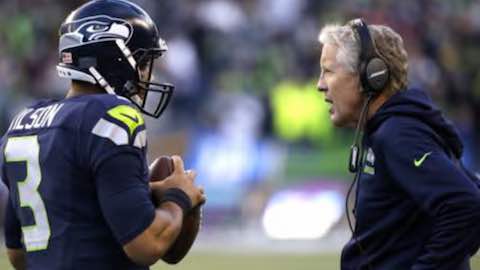 Converting on 3rd or 4th down is what keeps drives alive. It also could mean the difference between winning and losing. Here's a look at the NFL teams that are the best at converting on these key downs

Excelling on third down extends drives and keeps your opponent off the field, which can be an important factor in winning games.

"The ability to convert keeps us going on offense and gets us those opportunities we always talk about," says Seahawks head coach PETE CARROLL. "It helps us in the red zone as well. It gets us another shot at making the touchdown play come to life, whether it's a run or a pass."

The six playoff teams which converted at least 40 percent of their third-down attempts:

Best Efficiency Rate on 3rd Down

"Something big is going to happen," says NFL Network analyst and former NFL head coach BRIAN BILLICK. "Either you're going to convert in a crucial situation that keeps a drive alive or you get stopped. It's either a huge emotional lift for your team or a huge emotional drain."

The Oakland Raiders converted all five of their fourth-and-one situations last season, finishing as the only team with a perfect mark in the category (minimum five attempts) for a second consecutive season. The Seattle Seahawks, Green Bay Packers and Atlanta Falcons all converted six of their seven fourth-and-one conversions, tying for second in the league with an 85.7 percent success rate.

The teams with the most attempts and the best efficiency rate on fourth-and-one last season:

Pittsburgh Steelers Pro Bowl wide receiver Antonio Brown led all receivers on third down with 31 first-down catches in 2015. Brown has 265 total receptions over the past two seasons, the most catches in any two-season span in NFL history.

"You can tell him that he doesn't have the best measurables, but his will and mentality make him special in critical situations," says Steelers head coach MIKE TOMLIN. "Certain things go beyond the cookie cutter of what you imagine an ideal player looks like. His mentality every day is what makes him great."

The receivers with the most first-down receptions on third down in 2015: