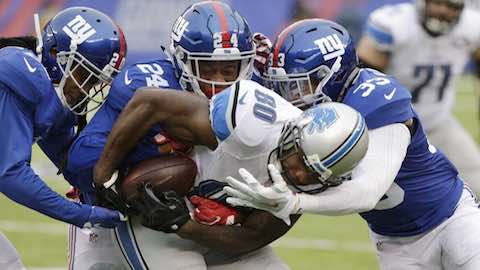 Despite all that offense this season, defenses were heard from as well. Here's a look at the excitement we witnessed on the defensive side of the ball during the NFL 2016 Regular Season.

Green Bay linebacker JULIUS PEPPERS had 7.5 sacks and climbed to fifth place on the NFL's all-time sack leaderboard with 143.5 career sacks. Denver linebacker DE MARCUS WARE had four sacks and has 138.5 sacks in his career, the eighth-most in the NFL since the statistic became official in 1982.

Kansas City safety ERIC BERRY became the first player to return an interception for both a touchdown and a two-point conversion in the same game in the Chiefs' Week 13 win at Atlanta.

Berry intercepted a two-point conversion attempt and returned it for the go-ahead score with 4:32 remaining in the fourth quarter in the Chiefs' 29-28 victory over the Falcons, marking the first game-winning defensive two-point conversion scored when his team was trailing since the rule was adopted in 2015. He also added a 37-yard interception-return touchdown in the contest.

The Arizona Cardinals (MARKUS GOLDEN, 12.5; CHANDLER JONES, 11) and Seattle Seahawks (CLIFF AVRIL, 11.5; FRANK CLARK, 10) were the only teams with two players who each had double-digit sacks.

New York Giants cornerback DOMINIQUE RODGERS-CROMARTIE (six) and safety LANDON COLLINS (five) were the only pair of NFL teammates with at least five interceptions in 2016.

Oakland defensive end KHALIL MACK recorded at least one sack in eight consecutive games in 2016, tying for the sixth-longest streak in the NFL since the sack became an official statistic in 1982.

Mack was the only player in the NFL this season with at least 10 sacks (11) and an interception-return touchdown.