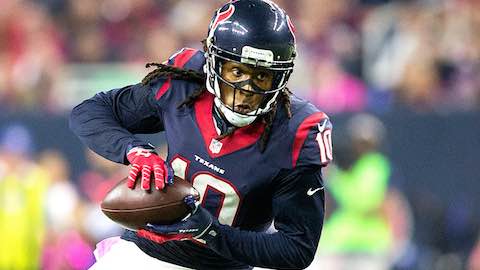 The rise of pass-oriented NFL offenses has led to an abundance of elite talent at wide receiver. And there are some great ones. Here's the best wide receivers in the NFL today, heading into the regular season

A look at the three seasons which featured four players with at least 1,500 receiving yards:

Seven players caught at least 100 passes in 2015, the second-most players with 100+ receptions in a single season:

Most players with 100+ receptions in a single season

Players with at least 100 catches

The NFL's Most Targeted Receivers

Last season, Atlanta Falcons wide receiver Julio Jones was targeted 203 times to lead all receivers. Only Calvin Johnson (204 in 2012) and Marvin Harrison (205 in 2002) have had more targets in a season in the past 15 years.

Jones puts much of the credit on the shoulders of his quarterback, MATT RYAN.

"Matt has all the faith in the world in me and I have the same in him," says Jones. "We're a team. When my number is called, I've got to step up and make those plays. Matt is just going to keep being Matt Ryan, throwing great balls and we'll see the outcome."

Most Targeted Receivers in 2015

Most Targeted Receivers Since 2013

Boldin, Fitzgerald and Witten joined nine other players -- including Pro Football Hall of Famers Jerry Rice, Marvin Harrison, Cris Carter and Tim Brown -- as the only players in NFL history to record at least 1,000 career catches.

"To me, the highest honor you can have is when people say you played the game at a high level and you played it at a high level for a long time," says Witten, who joined TONY GONZALEZ as the only tight ends in NFL history to reach 1,000 career receptions. "To reach a milestone like this, that is consistency. I can't even put into words what an honor it is."

The players with 1,000 career receptions: