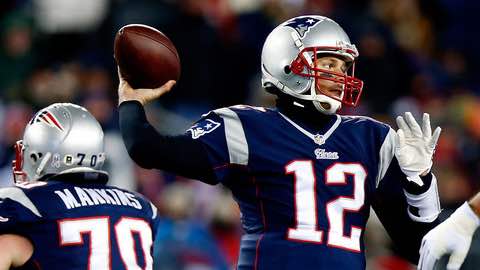 Last season, Tom Brady guided the Patriots to their fifth consecutive AFC Championship Game and is the first starting quarterback in NFL history to win 13 division championships. Love him or hate him, Tom Brady is one of the all-time elites and his winning ways are sure to continue this season as well

"Tom has meant a lot to us since he's been here," says Patriots head coach Bill Belichick, who has combined with Brady for the most regular-season wins (172) by a quarterback-head coach duo in NFL history. "He started winning playoff games the first year he really got a chance to participate in them. Tom is a great competitor. He's our leader and we all follow him, we all respect him. There's no quarterback I'd rather have than Tom Brady."

Brady's star has always shined the brightest during the playoffs. He is the all-time postseason leader in career completions (738), touchdowns (56), passing yards (7,957) and wins by a starting quarterback (22).

Tom Brady also shines during crunch time. In 2015, Brady posted a passer rating of 111.3 in the fourth quarter.

"Tom has been just a tremendous leader and tremendous player for our organization," says Patriots head coach BILL BELICHICK about Brady. "He's the greatest quarterback of all time."