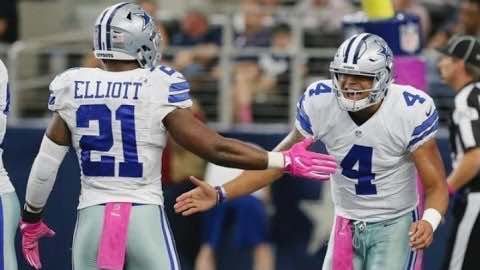 Led by Cowboys Quarterback Dak Prescott and Cowboys running back Ezekiel Elliott, NFL rookies made an impact this regular season. Here's a look at the impact that Prescott, Elliott and other outstanding NFL rookies made in the NFL this season

Dallas quarterback DAK PRESCOTT completed 311 of 459 passes (67.8 percent) for 3,667 yards with 23 touchdowns and four interceptions for a 104.9 passer rating, the highest single-season passer rating by a rookie quarterback in NFL history.

Prescott helped guide the Cowboys to a 13-3 record, tying BEN ROETHLISBERGER (13 in 2004) for the most wins by a rookie starting quarterback in NFL history.

Dallas running back EZEKIEL ELLIOTT led the NFL with 1,631 rushing yards this season, the third-highest single-season total by a rookie running in NFL history, trailing only Pro Football Hall of Famer ERIC DICKERSON (1,808 in 1983) and GEORGE ROGERS (1,674 in 1981).

Elliott had five games with at least 125 rushing yards, trailing only Dickerson (seven in 1983) for the most ever by a rookie.

Dallas became the only team in NFL history to have a rookie pass for 20 touchdowns (Prescott, 23) and a rookie rush for 15 touchdowns (Elliott, 15) in the same season.

Chicago rookie running back JORDAN HOWARD finished second in the NFL with 1,313 rushing yards in 2016. Elliott and Howard became the first pair of rookies to finish first and second in the league in rushing yards since PAUL ROBINSON (1,023) and ROBERT HOLMES (866) of the AFL in 1968.

Philadelphia quarterback CARSON WENTZ became the first rookie since 1970 to start and win his team's first three games to begin a season without throwing an interception.

Wentz, who had 379 completions this season, set the NFL record for the most completions by a rookie, surpassing SAM BRADFORD (354 in 2010).