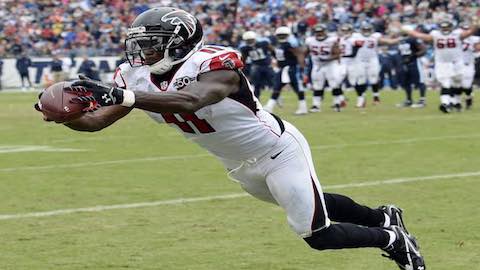 Atlanta Falcons Pro Bowl wide receiver Julio Jones recorded one of the greatest receiving seasons in NFL history last year. Jones had 136 catches for 1,871 yards with eight touchdowns and is the only player in league history with at least 125 catches and 1,850 receiving yards in a single season.

On the heels of his performance last season, Julio Jones has elevated himself to the level of elite NFL receivers with the potential of being one of the NFL's all-time greatest receivers. Jones, now 27 years old, caught an 66.7 percent of the NFL-leading 204 targets. Over his last 36 games with the Falcons he's averaged 112.3 receiving yards per game.

"Julio is as good as there is," says Falcons quarterback MATT RYAN about his favorite target. Jones led the league with 1,871 receiving yards, the second-most in a single season in NFL history, trailing only Calvin Johnson (1,964 in 2012).

"Julio doesn't back down," says Atlanta head coach DAN QUINN. "Any challenge there is, he's ready to go. It's one of the things I respect the most about his game. He's one of those competitors that is ready for it every time. He's the guy that wants the ball thrown to him and wants to take the last shot. I can't say enough about him as a competitor."

Julio Jones and Pittsburgh's Antonio Brown tied for the league lead last season with 136 receptions, the second-most in a single season in NFL history, trailing only MARVIN HARRISON (143 in 2002). Jones and Brown are the only players in league history to post at least 130 receptions and 1,800 receiving yards in a single season.

"Julio is an extremely hard worker," says Houston Texans defensive end J.J. WATT. "The guy goes out there and works hard. He's a physical freak for a reason and that's because he puts in the work. Some of the things that he does on the field, both from a speed aspect and a strength aspect, he's a pretty incredible player to watch."