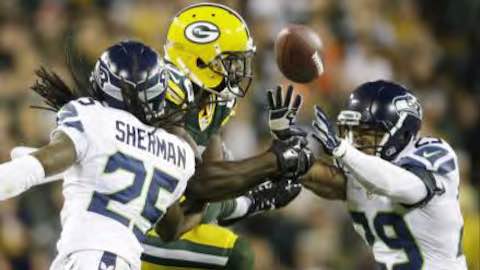 A big part of the Seattle Seahawks success has been their 'Legion of Boom' defense, which has led the NFL in fewest points allowed in each of the past four seasons.

The Seattle Seahawks have advanced to the playoffs in each of the past four seasons, including two Super Bowl appearances and a win in Super Bowl XLVIII.

"To go four straight years leading the league in scoring defense, that's a remarkable accomplishment by a bunch of guys dedicated to the program," says Seahawks head coach PETE CARROLL. "It's hard to do things over a long period of time that well. That's a great stat and of all the stats, that's the one that demonstrates the most. That's why we're so proud of that."

"Defense wins championships," says Seahawks Pro Bowl safety KAM CHANCELLOR, one of the members of Seattle's vaunted 'Legion of Boom' secondary. "We're working our hardest to get back to the Super Bowl. We're more focused and more driven than ever. We're hungry."

Seattle's success on defense has come from a combination of talent and intelligence along with hard work and preparation.

"I'm incredibly proud," says Seahawks All-Star cornerback RICHARD SHERMAN. "It's a big deal. That takes a tremendous amount of consistency and diligence from every position group. It's a testament to how hard guys work and how guys prepare every week."

"It's just us playing our style of football. We never stop being grinders and we never stop playing that way. We're not just All-Pro players, we're All-Pro minds."

The Seahawks are only the second team in NFL history to lead the league in points allowed in four consecutive seasons. The 1953-57 Cleveland Browns are the only other team to accomplish the feat.

"We recognize that what we're doing right now is pretty good," says Seattle Pro Bowl linebacker BOBBY WAGNER. "Our job is to keep that going. If we put a couple more championships up there, then people should consider us with the great defenses of alltime."

And that's the goal for the Seahawks, who will enter the 2016 season looking to shut down opposing offenses on their way to another Super Bowl appearance.