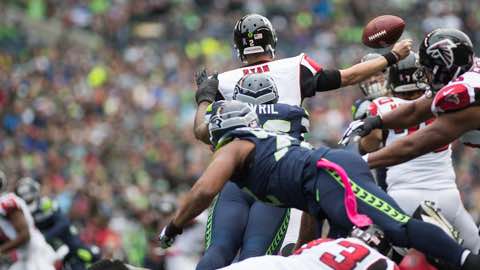 The Seahawks' rematch against Atlanta will require more plays like Cliff Avril's sack of QB Matt Ryan in the Oct. 16 game.

Revivifying the running game may have excited Seahawks fans, but it wasn't especially impressive to Las Vegas bookmakers, who have made Atlanta a four-point favorite, when the 11-5 Falcons host the 11-5-1 Seahawks in the Georgia Dome in a divisional-round playoff game.

Thanks to a big day rushing, the Seahawks defense played only 23 minutes and 50 plays in win over Lions. Keeping QB Matt Ryan off the field may be the most important feat Saturday in Atlanta.

Hard to knock the historical logic: The Seahawks have won only three road games in their playoff history (1983, 2013 and last January at Ice Station Zebra in Minneapolis).

But the current situation, based primarily on the 26-6 win wild-card win over the Lions Saturday, suggests that a Seahawks upset is plausible. Because as formidable as the Falcons offense is, the defense is on a seasonal par with Detroit: Atlanta against the run was ranked 17th at 104.5 yards a game and Detroit 18th at 106.5.

The Seahawks ran for 177 yards against the Lions, including a club-playoff-record 161 from RB Thomas Rawls, deploying an old-fashioned I-formation with lead blocking from FB Marcel Reece that would have made Woody Hayes proud.

Besides the salutary effect on offensive efficiency, the run game allowed the defense a considerable break by having to play just 23 minutes against 55 plays. The Lions never came closer to the end zone than the 33-yard line and scored only two field goals, both beyond 50 yards.

“I had my feet propped up on the sideline,” said LB K.J. Wright, grinning. “It was fun watching them melt that clock.”

Said SS Kam Chancellor: “They even came to the sideline saying, ‘We’re going to keep you off the field.’ It gives us time to rest, and go over adjustments we see on the field.”

In the first meeting between the teams Oct. 16 at the Clink, won by Seattle 26-24, the defense held the Falcons to 362 yards, 53 below their average that was second in the NFL. More important, Atlanta had just four of 13 conversions on third and fourth downs.

But those numbers happened with the presence of FS Earl Thomas, who watched Saturday’s game on crutches from the sideline. His loss for the season to a broken leg is a big opportunity for QB Matt Ryan, who is in the talk for Most Valuable Player.

He led the NFL with a passer rating of 117.1 on 38 touchdown against seven interceptions. (Seahawks QB Russell Wilson was 14th at 92.6 with 21 TDs and 11 picks). That makes it imperative for Seattle to control the clock and limit Ryan’s possessions.

In the October game, possession time was nearly even. Ryan was good — 27 for 42 for 335 yards, including three touchdowns in 11 minutes of the third quarter, and one pick by Thomas — but the feared running back tandem of Devonta Freeman and Tevin Coleman was held to 52 yards in 18 carries.

The guy who went off was WR Julio Jones, who had 139 yards and one touchdown among seven receptions, mostly matched up against CB Richard Sherman. But on Atlanta’s second-to-last possession to move toward a potential game-winning field goal, a Jones reception was broken up by Sherman after what most observers considered pass interference that went uncalled.

The third quarter featured a sideline eruption by Sherman, because a miscommunication with SS Kelcie McCray allowed Jones free for a 36-yard touchdown. Sherman’s rant against defensive coordinator Kris Richard, which required teammates to attempt to get Sherman settled down, disrupted the defense for the rest of the quarter, which included two more passing touchdowns that flipped a 17-3 Seattle lead at halftime.

“He got really upset that we didn’t play something correctly,” coach Pete Carroll said. “When we get that hot, we have to control it better so we don’t get in the way of what’s coming up.”

But even Carroll acknowledged the lingering impact.

“I think there was some impact,” he said. “We had to get through it, and we did.”

The Falcons lost the following week to San Diego, 33-30, in overtime, but since then won seven of their final nine to snatch the NFC’s No. 2 seed and its bye from the Seahawks.

For the Seahawks to pull off another successful running game, especially on the road, will be a feat. They averaged 88.1 yards rushing away from the Clink.

But that was then. This is the elite-eight playoffs Saturday.

The line “had a lot of garbage come their way,” Carroll said after the game. “A lot of talk about them. They’re really pumped up about what they did today.

“I’m really fired up for the guys up front.”

Garbage in, garbage out.