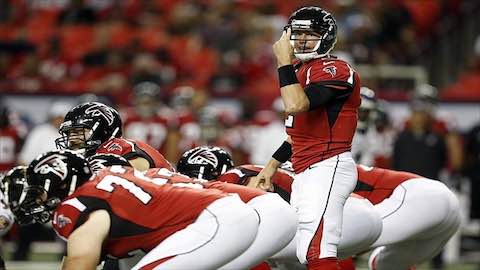 Great players and teams excelling once again. Records falling. Offenses making their mark. And so much more. Here's a look at the excitement we witnessed on the offensive side of the ball during the NFL 2016 Regular Season.

The NFL 2016 regular season had it all, including a fantastic finish. The 2016 season also proved that consistency is difficult, but not impossible, to maintain in the NFL.

In all, 1,306 total touchdowns were scored, also the third-most all-time.

NFL QBs put together a historically proficient and prolific year in 2016.

The league-wide completion percentage (63.0) tied the previous record set in 2015, while the league-wide passer rating (89.3) ranked second behind only the 2015 season (90.2). There were 786 touchdown passes thrown in 2016, the fourth-highest total in NFL history.

The league-wide interception percentage of 2.3 percent was the lowest of any season in NFL history, surpassing the previous mark of 2.4 in 2015.

There were 57 individual performances with three touchdown passes without an interception in 2016, the third-highest of any season in NFL history (59 in 2015, 58 in 2014).

Brees ranked third in the NFL with 37 touchdown passes, joining TOM BRADY (four), Manning (four) and Rodgers (four) as the only players in NFL history with at least 35 touchdown passes in four different seasons.

Brees has passed for at least 30 touchdowns in nine consecutive seasons, extending his NFL-record streak.

Detroit quarterback MATTHEW STAFFORD led the Lions on eight game-winning drives in the fourth quarter or overtime in 2016, the most such drives by a quarterback in a single season since 1970.

Tampa Bay quarterback JAMEIS WINSTON had 4,090 passing yards and became the first player in NFL history with at least 4,000 passing yards in each of his first two seasons.

Winston (50) is one of only five quarterbacks to pass for at least 50 touchdowns over his first two seasons, joining Pro Football Hall of Famer DAN MARINO (68), DEREK CARR (53), PEYTON MANNING (52) and RUSSELL WILSON (52).

Dallas rookie quarterback DAK PRESCOTT passed for 3,667 yards with 23 touchdowns and four interceptions for a 104.9 rating in 2016. Prescott joined TOM BRADY (2010, 2016) as the only quarterbacks in NFL history with at least 3,500 passing yards and fewer than five interceptions in a season and is the first rookie in NFL history to accomplish the feat.

Dallas running back EZEKIEL ELLIOTT led the NFL with 1,631 rushing yards this season, becoming the fifth rookie since 1970 to lead the league in rushing yards and the first since EDGERRIN JAMES (1,553 yards) in 1999.

Arizona wide receiver LARRY FITZGERALD led the NFL with 107 catches and at 33 years, 123 days old, became the oldest player to lead the league in receptions since Pro Football Hall of Famer JERRY RICE (34 years, 71 days) in 1996.

Pittsburgh wide receiver ANTONIO BROWN ranked second in the NFL with 106 catches this season and has 481 receptions over the past four seasons, surpassing Pro Football Hall of Famer MARVIN HARRISON (469 from 1999-2002) for the most catches in any four-year span in NFL history.

Brown has four consecutive seasons with at least 100 catches, tying Harrison (four from 1999-2002) for the most consecutive 100-catch seasons in NFL history.

Wide receivers LARRY FITZGERALD of Arizona and ANQUAN BOLDIN of Detroit each played in their 200th career games in Week 16. Fitzgerald (1,116) has the most career receptions in a player's first 200 games in NFL history, surpassing Pro Football Hall of Famer JERRY RICE (1,115).

Boldin had 67 catches this season, the 14th consecutive season he has caught 50+ passes since entering the league in 2003. That is the longest streak to begin a career in NFL history.

Fitzgerald, who recorded his 13th consecutive season with 50+ catches, has the second-longest such streak to begin a career.

New York Giants wide receiver ODELL BECKHAM JR. finished third in the NFL with a career-high 101 catches. Beckham has 288 receptions through his first three seasons, tied with Miami's JARVIS LANDRY for the most through a player's first three seasons in NFL history.

Beckham and Landry are the only two players in NFL history with at least 80 catches in each of their first three seasons in the NFL.

San Diego tight end ANTONIO GATES had seven receiving touchdowns in 2016 and has 111 career touchdown catches, tying TONY GONZALEZ for the most by a tight end in NFL history.

Johnson recorded at least 100 scrimmage yards in each of his first 15 games this season, becoming the first player in NFL history to start a season with 15 consecutive games with 100+ scrimmage yards.

Johnson tied Pro Football Hall of Famer BARRY SANDERS (15) as the only players in NFL history to record 15 consecutive games with at least 100 scrimmage yards in a single season.

Indianapolis running back FRANK GORE, who has 13,065 rushing yards and 414 receptions in his career, became the fifth player in NFL history with at least 13,000 rushing yards and 400 receptions. Gore joined Pro Football Hall of Famers CURTIS MARTIN, WALTER PAYTON and EMMITT SMITH and LA DAINIAN TOMLINSON as the only players to accomplish the feat.

Kansas City rookie wide receiver-return specialist TYREEK HILL became the first player since Pro Football Hall of Famer GALE SAYERS in 1965 to have a rushing touchdown, receiving touchdown and kickoff-return touchdown in the same game in the Chiefs' Week 12 overtime victory at Denver.

With 125 points this season, Vinatieri became the only player in NFL history to score 100+ points in 19 different seasons.