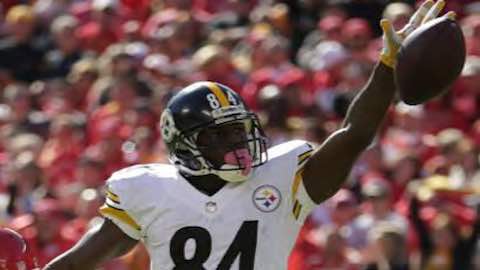 Here's the receivers that NFL teams rely on for clutch plays -- whether it's moving the chains for first downs, gaining clutch yards after the catch, or providing big play excitement

Pittsburgh Steelers Pro Bowl wide receiver Antonio Brown led all receivers on third down with 31 first-down catches in 2015. Brown has 265 total receptions over the past two seasons, the most catches in any two-season span in NFL history.

"You can tell him that he doesn't have the best measurables, but his will and mentality make him special in critical situations," says Steelers head coach MIKE TOMLIN. "Certain things go beyond the cookie cutter of what you imagine an ideal player looks like. His mentality every day is what makes him great."

Yards After The Catch

"It's a two-fold thing," says former Chargers offensive coordinator and current Eagles offensive coordinator FRANK REICH about Woodhead's success with yards after the catch. "One is Danny's ability to create leverage, create space and create windows for PHILIP RIVERS to throw into. And then Philip has the ability to find him and get him an accurate throw. Because if you get a guy who's already created leverage and created space and separation, then with his athletic ability I think that's why Danny is doing so well with yards after catch."

Atlanta's JULIO JONES led all wide receivers with 679 yards after the catch last season and ranked first in the NFL with 1,871 receiving yards. "Julio, he's an awesome player," says Falcons quarterback MATT RYAN. "He shows that basically every time he steps onto the field. He's able to catch it and get yards after contact. He's as good as there is and we're lucky to have him."

"He is a great competitor, extremely fast and quick," says Indianapolis Colts head coach CHUCK PAGANO about Brown. "It's really hard to cover this guy. He can run by anybody in this league. He has great burst, long speed, catch and run, and yards after catch. Just a dynamic guy and his numbers reveal that."

Drafted in 2014 by Miami, Dolphins wide receiver JARVIS LANDRY (583) (left) finished fifth in yards after the catch last season and has 194 career receptions, the most by any player in his first two seasons in NFL history.

"He's a playmaker," says Dolphins quarterback RYAN TANNEHILL about Landry. "Once you get the ball in his hands, it's a chance of a touchdown every single time. He runs hard and once he gets the ball in his hands, he's determined to make yards after the catch. He's one of the most fun guys to play with because every time he touches the ball he can do something with it."

The players with the most yards after the catch in 2015:

Most Yards After The Catch

Everyone in the stadium, from the field to the stands, feels the fans' excitement as they celebrate a big play with their team. Those plays can change the momentum of a game and give a team a lift.

Jacksonville Jaguars wide receiver ALLEN ROBINSON, who tied for the most touchdowns in the NFL (14) in 2015, had a league-best 31 receptions of 20 yards or more and is regarded as one of the premier playmakers in the game today.

"He's going to be a beast for a long time," says Pro Football Hall of Famer MICHAEL IRVIN about Robinson. "I text him about what it takes to be great and he soaks it up with a sponge. It shows on the field."

Jaguars quarterback BLAKE BORTLES agrees, and looks for continued success in the 2016 season and beyond. "Our chemistry is continuing to grow," says Bortles, "not only on the field, but off the field as well -- in the weight room and in the locker room."