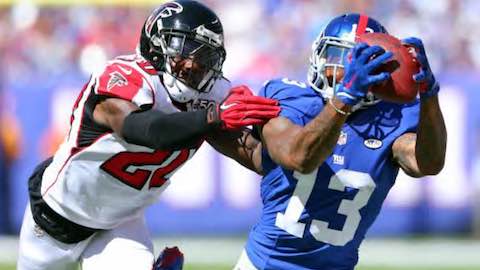 In two seasons New York Giants wide receiver Odell Beckham Jr. has one of the most impressive starts to an NFL career of any wide receiver. So can Odell be even more impressive this season?

It was a tough season for the Giants in 2015, but that doesn't diminish Odell's accomplishments.

New York Giants wide receiver Odell Beckham, Jr. has been selected to the Pro Bowl in each of his first two seasons, compiling 187 catches for 2,755 yards and 25 touchdowns in 27 career games. Since entering the NFL, Beckham has produced at a breath-taking level filling up highlight reels with the most acrobatic and unbelievable catches.

His stats are all the more impressive considering the offseason injuries that have hampered him over the last two years.

This year, Beckham is enters the NFL regular season after an off-season free of injuries. As a result, a 100% Odell is fully capable of topping his already impressive regular season accomplishments.

"Odell Beckham was born to be a wide receiver," says Pro Football Hall of Fame wide receiver Cris Carter. "He is a special player and he really wants to be great."

Beckham's 2,755 receiving yards are the most in NFL history by a player in his first two seasons, passing the previous mark set by Randy Moss (2,726).

"To be in the company of Randy Moss, I can't ask for much more," says Beckham. "He's a guy that I've looked up to all my life. I probably have all his jerseys. To be able to do some of the things I've done the past two years with this team, that's been very special."

He is the only player in NFL history with at least 150 catches, 2,000 receiving yards and 20 touchdown receptions in a player's first two seasons.

"I think you get better with time," says Beckham. "You learn some new things and then you have an idea of it more and you're able to play faster because you know more. You can see the difference."

In 2015, Beckham had four games with at least 140 receiving yards. He has nine such games in his career, the most in NFL history by a player in his first two seasons.

"Watching what Beckham has done in his first two seasons is tremendous," says Carolina head coach Ron Rivera. "He really has an opportunity to be one of those guys you'll talk about along with Jerry Rice. I had the great fortune of watching Jerry Rice and I see a lot of flashes in Odell's game. I just think he's a tremendous football player."

How Odell Beckham Jr.'s Amazing Catch Has Changed His Life