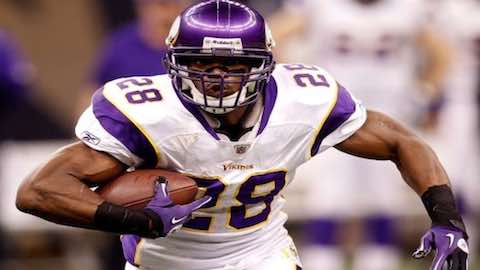 Minnesota Vikings running back Adrian Peterson led the NFL with 1,485 rushing yards last season becoming only the third player in NFL history to lead the league in rushing after their 30th birthday. Peterson is a work-horse and barring injury should produce yet another substantive season.

The running game was the Minnesota Vikings' primary offensive weapon last season. And even though the Vikings are striving for more balance this season, the running game should still figure prominently in the Vikings offense. All-Pro running back Adrian Peterson figures to be their work-horse.

By joining NFL Hall of Fame running backs Marion Motley (1950) and Curtis Martin (2004) as the only players older than 30 years old to win the rushing title, Peterson showed he still has plenty left in the tank.

Players to Lead NFL in Rushing at 30+ Years Old

It marks the third time Peterson has led the NFL in rushing. Peterson is one of only eight players all-time to win the rushing title at least three times -- all seven of the others to accomplish the feat are enshrined in the Pro Football Hall of Fame.

Most Seasons Leading the NFL in Rushing

Peterson rushed for 11 touchdowns last season, tied for the league lead, and joined Pro Football Hall of Famer EMMITT SMITH (eight) and LA DAINIAN TOMLINSON (nine) as the only players in NFL history to rush for 10 touchdowns in at least eight different seasons.

"There aren't many like him," says Smith, the NFL's all-time leading rusher, about Peterson. "He has the inside running ability, the outside running ability and the breakaway speed. Plus the sheer brute strength when he needs it. And he's tough."

Most Seasons with 10+ Rushing TDs

In his career, Peterson has rushed for 11,675 yards and scored 102 touchdowns (97 rushing, five receiving). In Week 14, Peterson scored his 100th career touchdown in his 117th career game and joined Pro Football Hall of Famers JIM BROWN and Smith and Tomlinson as the only players in NFL history with at least 10,000 rushing yards and 100 total touchdowns in the first 117 games to begin a career.

"I appreciate everything he does for us," says Vikings head coach MIKE ZIMMER. "His leadership, the way he comes out to practice and the way he prepares. Everything. I'm impressed with him and the way he does things all the time."

In Week 10, Peterson rushed for 203 yards, his sixth career 200-yard rushing game, tied with Pro Football Hall of Famer O.J. SIMPSON for the most 200-yard rushing games in NFL history. Peterson has 30 career games with at least 125 rushing yards, the sixth-most in NFL history. The only players with more are all members of the Pro Football Hall of Fame: BARRY SANDERS (46), Brown (41), WALTER PAYTON (38), ERIC DICKERSON (36) and Smith (34). Peterson's 18 career games with at least 150 rushing yards are tied with Dickerson and Smith for the fourthmost in NFL history.