NFL 2016: Young Quarterbacks On The Rise 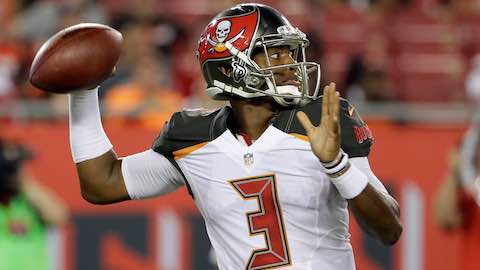 NFL 2016: Young Quarterbacks On The Rise

"One of the most astounding statistics that I've seen in football in the last 25 years is the amount of young quarterbacks that are playing early and playing well," says ESPN NFL analyst and former NFL head coach Jon Gruden. "They are coming into the league much more accomplished in terms of throwing the football and recognizing defenses."

JAMEIS WINSTON of the Tampa Bay Buccaneers and MARCUS MARIOTA of the Tennessee Titans have proven that young quarterbacks can play early and succeed in today's NFL. Winston and Mariota were selected with the first and second picks, respectively, in the 2015 NFL Draft. They started against one another in Week 1 and it marked the first time in NFL history in which the top two picks in the NFL Draft started at quarterback against one another in Week 1 of that season. The NFL has now had at least one rookie quarterback start in a Week 1 game in eight consecutive seasons, the longest streak since at least 1950.

Winston and Mariota are two of the many young quarterbacks taking the NFL by storm. Third-year quarterbacks BLAKE BORTLES of Jacksonville, TEDDY BRIDGEWATER of Minnesota and DEREK CARR of Oakland all hope to build on their experience entering 2016.

Last season, Bortles (35) joined Pro Football Hall of Famer DAN MARINO and MATTHEW STAFFORD as the only players in NFL history with at least 35 touchdown passes in a season at age 23 or younger.

As a rookie in 2014, Bridgewater (64.43) recorded the third-highest completion percentage in any rookie season in NFL history. Last season, he became the second quarterback in NFL history to complete at least 85 percent of his passes with four touchdowns and no interceptions and rush for a touchdown in a single game (FRANK RYAN on December 12, 1964).

Rising stars at quarterback who were drafted since 2013:

"We know we have the right guy. He's a natural leader and the players really respond to him. He is very competitive and tough-minded and those aspects continue to grow. He did some really good things last season as we put a lot on his plate -- 35 touchdowns and over 4,000 passing yards. He plays with no fear." -- Jacksonville Jaguars head coach Gus Bradley

"Teddy is calm through the ups and downs. He's growing as a young quarterback. His demeanor never changes and the one thing I know is he's always the first one in the building and the last one to leave. That resonates down through that locker room and all those guys see that. And I know our team and our coaches and myself really believe this kid is going to be something special down the road here." -- Minnesota Vikings general manager Rick Spielman

"I think you see all the physical ability. He's unique in what he can do with a football and what he can do with his right arm. You saw more confidence in what he can do, and more confidence in the guys around him. You're excited about what the future can be. I hope he continues to grow year in and year out and gets better every year because with the track that he's on now, that bodes well for a really, really good NFL career if he can continue to grow." -- NFL Network analyst and former NFL quarterback Kurt Warner

"I think he has a tremendous upside. He performed in an offense that was completely different than the one he ran at Oregon, and I thought he did an excellent job. Underneath the center, changing plays at the line of scrimmage, moving his football team -- and he did it in a lot of adverse situations. What impressed me most was the first game he played in Tampa. He proved to me, and everybody I think, 'This guy is the real deal.'" -- ESPN NFL analyst and former NFL head coach Jon Gruden

"Jameis is very perceptive about not only what he needs to get better but what our offense and our team needs to get better. That's one of the things when you're around him more, he's mature way beyond his years. I just learned so much about Jameis during the season -- what a worker he is, how much he cares about winning and cares about his teammates. I think he can take a huge step because when you have a better idea of what to expect it's so much easier the second time around." -- Tampa Bay Buccaneers head coach Dirk Koetter