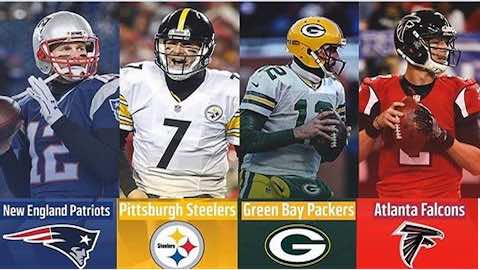 [ Related: What To Look For: Championship Weekend ]

The final four teams are set as this Sunday determines which two teams will be heading to Houston for Super Bowl LI.

NFL Championship Sunday begins with the NFC title game between the Green Bay Packers and Atlanta Falcons in the final NFL game at the Georgia Dome. The Falcons defeated Seattle 36-20 in the Divisional round and the Packers knocked off the top-seeded Cowboys 34-31. The teams met in Week 8 (October 30, 2016) with the Falcons notching a 33-32 victory.​

This is the fourth postseason meeting between the teams and the first since the 2010 season. Green Bay has won two of the previous three playoff meetings, including a 48-21 win over Atlanta on January 15, 2011.

The Packers lead the all-time series 17-14 (including the postseason). Green Bay has won four of the past five meetings. Atlanta won the last contest between the clubs, knocking off the Packers 33-32 at the Georgia Dome in Week 8 (October 30, 2016).

The Green Bay Packers are 11-5 (.688) all-time in NFC/NFL Championship Games and the team's 11 victories are the most in NFL history. Green Bay is making its first NFC Championship Game appearance since the 2014 season (January 18, 2015) when the Packers lost 28-22 in overtime at Seattle.

Green Bay defeated Dallas 34-31 last week in the Divisional Playoffs. It marked their 34th postseason victory, tied with the Cowboys for the most by an NFC team.

The Packers have won eight consecutive games, outscoring opponents 257-156 during that span.

Packers quarterback AARON RODGERS, who has passed for at least 350 yards and multiple touchdowns in both playoff games this season, has a 100.1 career postseason passer rating, one of four quarterbacks in NFL history to have a 100+ rating (minimum 150 attempts).

Atlanta led the NFL with 540 points scored during the regular season, the first time in franchise history the Falcons have ranked No. 1 in that category. Including last week's Divisional Playoff game, Atlanta has scored a touchdown on its first possession in each of the past seven games.

During the regular season, Ryan threw a touchdown pass to 13 different players, the most in a season in NFL history.

Falcons wide receiver JULIO JONES was the only player in the NFL this season to average at least 100 receiving yards per game (100.6). Jones tied for the team-lead with six receiving touchdowns and had a touchdown catch last week.

The Steelers lead the all-time series 15-14 (including the postseason). The Patriots have won the past three meetings, including victories in each of the past two regular seasons. New England knocked off Pittsburgh 28-21 to open the 2015 regular season (September 10, 2015) and defeated the Steelers 27-16 in Week 7 earlier this year (October 23, 2016).

Steelers head coach MIKE TOMLIN won his 8th career postseason game and looks to lead the Steelers to the Super Bowl for the third time in his career.

Pittsburgh running back LE'VEON BELL rushed for 170 yards last week and is the first player in NFL history to rush for at least 150 yards in each of his first two postseason games. Bell, who had 167 rushing yards and two touchdowns in the Wild Card win against Miami, has the two highest single-game rushing performances in franchise postseason history.

Pittsburgh quarterback BEN ROETHLISBERGER has now won 13 of his 19 career postseason starts and will play in his fifth AFC Championship Game.

Steelers kicker CHRIS BOSWELL made all six field-goal attempts in last week's win at Kansas City, the most field goals made in a single postseason game in NFL history.

Belichick has advanced to 11 Conference Championship Games, the most by a head coach since the 1970 merger.

Brady has 23 career playoff wins, the most by any starting quarterback in NFL history. Brady is also the NFL postseason leader in career completions (756), attempts (1,221), passing yards (8,244) and touchdown passes (58).

New England wide receiver JULIAN EDELMAN had eight catches for 137 yards against Houston. Edelman has 76 career postseason catches with the Patriots, the most in franchise history.

Cornerback LOGAN RYAN and safeties DEVIN MC COURTY and DURON HARMON each had an interception last week against Houston.

ESPN First Take - Which Teams Will Play In Super Bowl?

[ Related: What To Look For: Championship Weekend ]