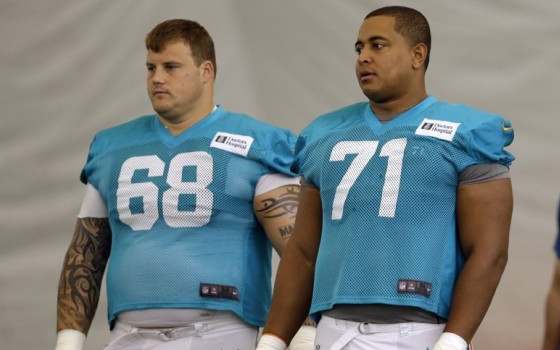 Offensive lineman Jonathan Martin believes that he can get along well with his new San Francisco 49ers teammates.

"I can tell already that I'm going to get along just great with those guys," Martin said of his new teammates. "I've felt a warm welcome from the entire 49ers community, fan base, coaching staff, everybody."

"I'm just looking forward to the future and getting back to playing football," added Martin, who was at the center of a bullying controversy last season with the Miami Dolphins.

According to a report by independent investigator Ted Wells, Martin received a pattern of harassment from Richie Incognito and several other former teammates in the Dolphins locker room.

"My focus is 100 percent on the future and moving forward," he said. "It's a blank slate for me. I'm looking forward to revitalizing my career, getting back to playing. I want to do whatever I can to contribute to this O-line. It's one of the best O-lines in football already."

Despite what transpired in Miami, Martin said he never had any plans to retire.

"That didn't even cross my mind at any point," Martin said. "I'm a football player. I've been a football player my entire adult life. My goal is to have a successful NFL career. I'm just looking forward to the future... and hopefully retiring as a 10-year vet."

"I think it worked out great to once again be playing for Coach Harbaugh, once again in the Bay Area," Martin said. "Playing for a winning franchise, a team that's had a lot of recent success. And to hopefully be able to contribute to further success with this team."

Before leaving the Dolphins in late October, Martin started in all 23 games he played in over one and half seasons.

The 2012 second-round pick played both right and left tackle in Miami, which is perfect for a San Francisco offensive line that features a 'swing tackle' type position that involves backing up starters Anthony Davis and Joe Staley.

If Martin does stick in San Francisco, then the Dolphins will get something out of the trade. Miami will get a 2015 seventh-round draft pick from the 49ers if Martin's on San Francisco's opening day roster in 2014.

The pick will change hands if Martin makes it on the 49ers opening 53-man roster.

Martin, 24, left Miami in late October because of locker-room bullying he received, most notably from fellow lineman Richie Incognito.

Shortly after, Harbaugh threw his support behind his embattled former player.

"I know him to be a fine person &hellip; a great contributor as a student and an athlete at Stanford," Harbaugh said.

The No. 42 overall pick in 2012, Martin earned First-Team All-America honors and was a finalist for the 2011 Lombardi Award, given to the nation's most outstanding lineman, in his final year at Stanford.

He figures to compete for a spot as the 49ers swing tackle.