From Manhattan to Washington, Indians Get Snookered 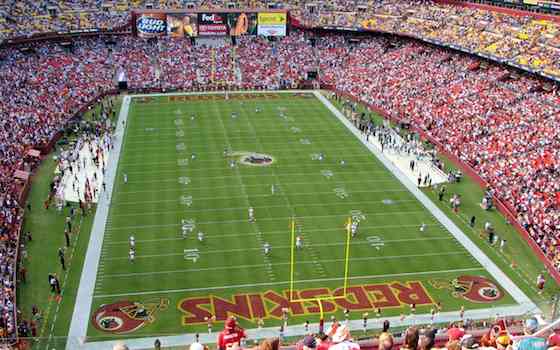 That, supposedly, was the price Gov. paid American Indians for the island of Manhattan in 1625. It's a tale historians find suspect.

In the first place, whatever Minuit paid was in goods valued at 60 17th-century Dutch guilders; the calculation that this equaled was made two centuries later -- on what basis, evidently, no one can say. In the second place, the Indians with whom he traded had no understanding of the European idea that land could be sold, no conception of it as a thing one could own.

But whatever the details of the transaction, the moral of the story has remained beacon clear for four centuries: The Indians got taken. It was hardly the last time they would be snookered in their dealings with the newcomers from across the water.

So it is gratifying to watch the response of at least some Native Americans as the professional football team which plays for the city of Washington unveils a new bit of flimflam in response to ever-growing demands that it find something else to call itself. You likely know the team's official name, but if not, you won't read it here. Call them the Washington Racial Slurs, a name fully descriptive of the anti-Indian insult under which they play.

The Oneida Indian Nation has been pushing the Slurs to change their name. A number of sports reporters and media outlets have vowed to refrain from using the ugly word and even conservative columnist recently came out against it.

Slurs owner has tried several stratagems to blunt this campaign. He has tried bluster ("We'll never change the name. It's that simple. NEVER -- you can use caps."). He has tried the appearance of reason ("I've listened carefully to the commentary and perspectives on all sides, and I respect the feelings of those who are offended by the team name.")

Apparently having just discovered the appalling conditions -- high rates of poverty, sickness, suicide -- in which too many American Indians live, Snyder created something called the "to provide meaningful and measurable resources that provide genuine opportunities for Tribal communities."

The response from at least two American Indian groups has been unambiguous: Thanks, but no thanks. and the both pulled out of a charity golf tournament last weekend that was to provide scholarships for Native American students, after learning OAF was the title sponsor of the event. "I find it underhanded and despicable that the Washington football team would co-opt this event," , the executive director of , told USA Today.

Ouch. Washington is not usually embarrassed that badly till after the season starts.

Perhaps Snyder's refusal is rooted in pure sentiment -- as a child, he was a Slurs fan -- perhaps in business concerns, perhaps in both. Either way he misses the point by a wide margin if he truly believes his glorified publicity stunt will fix -- or even address -- the problem. It won't. It can't.

Native Americans were not just cheated. They were removed and they were killed down to a tattered remnant shoved off to the margins of American life. So what Snyder seeks to buy is not just the right to use an execrable name in peace but also the self-respect of a people already long brutalized. And while scholarships are important, it is also important to be able to look at oneself in a mirror.

Nearly 400 years ago, Peter Minuit took Manhattan from people who had no concept of land as a thing that could be bought or sold. Turns out some of them feel that way about dignity, too.

From Manhattan to Washington, Indians Get Snookered